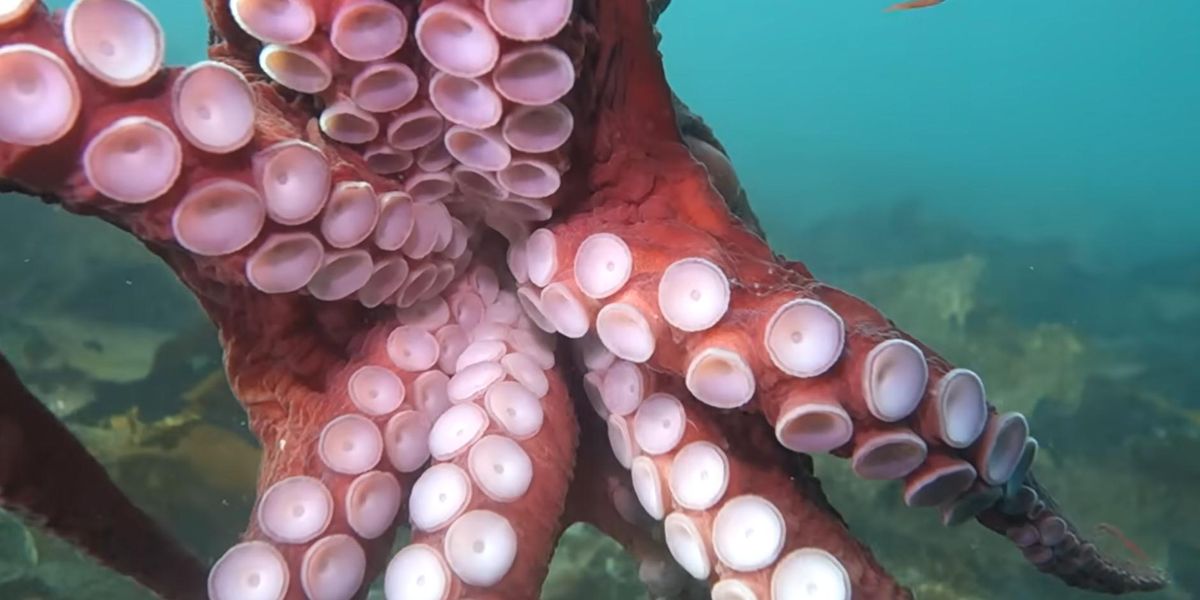 Turns out you don’t have to go 20,000 leagues under the sea to find yourself face to beak with an eight-legged spectacle. Last month, Canadian recreational diver and schoolteacher Andrea Humphreys encountered a giant North Pacific octopus in three-meter deep water off Campbell River on the east coast of Vancouver Island.

Despite having her camera at one stage engulfed in the kraken’s body, Humphreys was nevertheless able to capture striking footage of some of her rare and “epic” 40-minute long engagement.

Eight handshakes and a hickey

Humphreys, a teacher in the town of Campbell River, noted in an Instagram post that on Oct. 15, she and another local diver took friends from the east coast out in search of an octopus. Just three minutes into the dive, they chanced across one such beast.

Humphreys has been on nearly 700 dives over the past 12 years. She told the Canadian Press, “It was just mind-blowing.”

“It first crawled onto the friend and all over his mask, and then as I began to take photos and videos from a distance, it crawled to me and all over my camera and eventually onto my body!” said Humphreys.

According to Humphreys, the octopus was at least three meters tentacle to tentacle and boasted a body bigger than a basketball.

Although it hatches from an egg the size of a rice grain, the giant North Pacific octopus (enteroctopus dofleini) eventually grows to sport an arm span of 9.75 to 16 feet and to weigh between 22 to 110 pounds.

The largest of its kind, as recorded by Guinness World Records, weighed in at 300 lbs with a tentacle span of 31.4 feet.

ThoughtCo reported that the reddish-brown creature — the most intelligent invertebrate — has special pigment cells in its skin that enable it to change its skin texture and color as camouflage. Given that it is a carnivore, its ability to disguise itself as coral, plants, and rocks comes in handy.

The octopus that Humphreys met was neither stealthy nor bashful. Instead, wearing a fearless, nonaggressive red, it crawled toward and then onto her.

Humphreys said, “Its tentacles were reaching through the camera to feel my face and then at some point, it had crawled on my body, on my hips, and was giving me a hug.”

Once the creature attended to these initial salutations, it proceeded to put its tentacles up and around Humphrey’s mouth.

“It was sucking on my lip, which is the only exposed part of my body,” she said.

Humphreys wrote on Instagram that she wound up with “an octopus hickey!!”

Over the course of 40 minutes, the octopus reportedly inspected the divers’ equipment, taking special interest in Humphrey’s camera.

In an interview with CKLW, Humphreys said she had been “screaming … underwater because I was so excited.”

“A once in a lifetime moment,” said the diver. “I feel so blessed that this amazing creature gave me the opportunity to have this encounter.”

The giant Pacific octopus lives off the coasts of Alaska, British Columbia, California, Japan, Korea, Oregon, and Washington in cool, oxygenated water, its preferred depth ranging anywhere from the surface to 6,600 feet below.

This particular type of octopus is an opportunistic eater, consuming a variety of similarly-sized creatures including fish, small sharks, other octopuses, and even birds.

In 2020, fishermen off Vancouver Island intervened when they found one giant Pacific octopus trying to munch down on a bald eagle:

[embedded content]
Octopus captures eagle that tried to attack it

Although Humphrey’s encounter was cordial, the giant Pacific octopus can be fairly pugnacious. This video shows that the creature is willing to throw down with others of its kind: