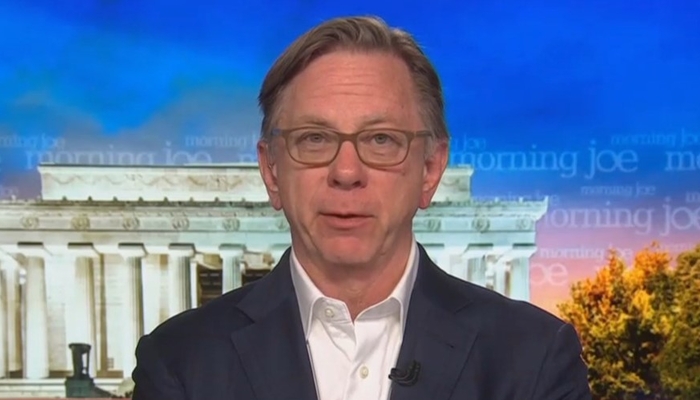 National Public Radio hates Republicans, and it doesn’t matter if Republicans pay a chunk of their salaries. On Wednesday, to discuss the state of the GOP, Morning Edition anchor Steve Inskeep brought on New York Times Magazine writer Robert Draper, author of a book colorfully titled Weapons Of Mass Delusion: When The Republican Party Lost Its Mind.

The GOP has “lost its mind” — that’s how you make yourself attractive to national taxpayer-funded radio. Media luminaries from Anderson Cooper to George Will endorse it.

Inskeep knew what he was getting, and heavily underlined several times that the GOP is the election-denying party. He asked leading questions about how the Republicans don’t believe in democracy any more:

STEVE INSKEEP: Can I get you to address a fear that exists among many Democrats and perhaps also some Republicans, a fear that a large part of the electorate in this country is in some way turning against democracy? You certainly can find surveys in which large numbers of people say, I wish that politicians would just do the right thing instead of what the voters tell them to do or what they think is politically popular. But having surveyed the Republican Party, particularly the way that you have, do you think that a large part of it truly has turned against democracy?

ROBERT DRAPER: Well, yes. And as a corollary to that, a large part of the electorate has turned against a reality-based form of democracy and instead is embracing a succession of lies that have, I think, in part soured them on the notion of democracy. If, after all, you believe, as tens of millions of Americans do, that the 2020 election was stolen, then you believe that democracy has been weaponized against you and that it’s a cheap concept and corrupt at its core. And so, yes, that remains a concern now.

Draper fully embraced the idea that it would take “weeks” to count the votes, and can’t see where that might inspire skepticism about post-election hanky-panky. It doesn’t matter if all the Trump-endorsed candidates lose, because the GOP is still delusional:

DRAPER: It’s going to take days, probably weeks to shake out the results of the 2022 midterms. And arguably, it is a referendum against Trumpism wherever it stands. But it does not change the fact that the base of the Republican Party is held together by individuals who are consumed by these delusions that January the 6th was a peaceful protest, that Democrats cheat to win and that COVID vaccines are either ineffectual or that they’re killers. I mean, that disparity between, you know, reality and what they embrace is, you know, a predominating concern.

Liberals love the idea that the Republicans are defined by anti-vaxxers, election deniers, and riot deniers. They can’t grasp the idea that many Republicans endorsed the vaccines (developed under Trump), are appalled by all riots, and concede defeat if they lost. They would unleash the “independent fact checkers” if you said the Democrats have a base that loves riots, denies elections when they lose, and hates vaccines.