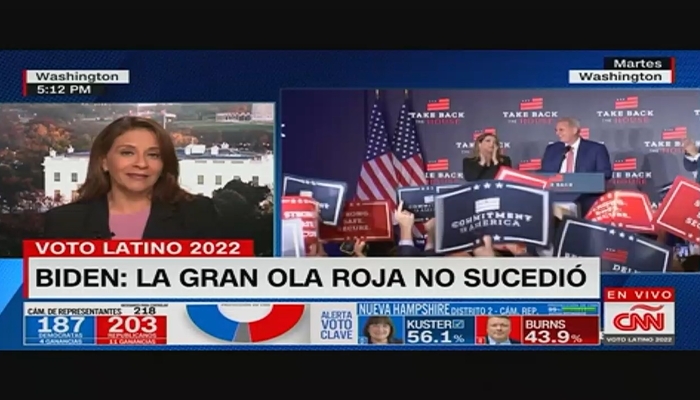 The dust has not yet settled from this weird midterm election, but the left and the media (pardon the redundancy) are working overtime to conflate the very real and ongoing Hispanic shift with the big “Red Wave” that ended up not materializing beyond Florida.

It started on Election Night, with the obnoxious and bigoted tweet from former White House press secretary and MSNBC contributor Jen Psaki, who said:

The Latino vote is not the same everywhere! There are huge generational differences and in Florida population of older voters  (more likely Rs) much larger than younger. Socialism does not play there.  And there is a massive disinformation problem in Spanish language media.

This talking point was echoed half an hour later by Latino Media Network (“Radio Soros”) board member, former Univision anchor and current ABC contributor María Elena Salinas, who tried to reassure liberals by saying that the GOP’s Hispanic vote blowout in Florida is “not indicative of the national Latino vote. Florida is a very small fraction of the Latino vote on a national level, so, we have to be careful not to read too much into this. This is just Florida.”

Fast forward to this opinion piece in The Hill, which boldly proclaims that “Midterm results dispel Hispanic rightward shift.” When amplifying the piece on Twitter, The View’s Ana Navarro echoed Psaki’s and Salinas’ assertions of Florida Hispanics being different from the rest of the nation.

The Latino Victory Fund would repeat that claim in trying to kill the Hispanic shift to the right, via a Twitter graphic displaying the disproportionate vote of the Hispainc vote in other states versus Florida. But the fact is that the shift endures.

Exit polls show the GOP attaining around 40% of the national Hispanic vote, which is a record for a midterm election and exceeds the 2020 total. Although she came up short, Congresswoman Mayra Flores of Texas overperformed in her D+16 district- cutting that margin by half. With votes still being counted in Arizona, but exit polls appear to show that gubernatorial candidate Kari Lake garnered improved Hispanic vote margins in comparison to President Donald Trump two years earlier.

In heavily Democratic Los Angeles County, significant Hispanic vote shifts in four congressional districts were found by Cook Political Report editor Dave Wasserman to be “jarring”. The data is real and the shift is real, no matter how hard the “experts” and the media may want to wish it away.

No one said that the ongoing Hispanic shift to the right would happen in one or two cycles. The shift is rooted in things that have been happening over the course of several decades, separate from the current issue arrays. The effort to conflate the shift to the stillborn red wave is intended to be disinformation and suppressive.

Going forward, expect further attempted tamping down of the Hispanic shift, and expect a renewed interest in “Spanish-language disinformation” as a means to prevent conservatives from entering communications spaces in some of these hotly contested states throughout the Southwest- which is all the proof you need that the very thing the left says isn’t happening is, in fact, very real.