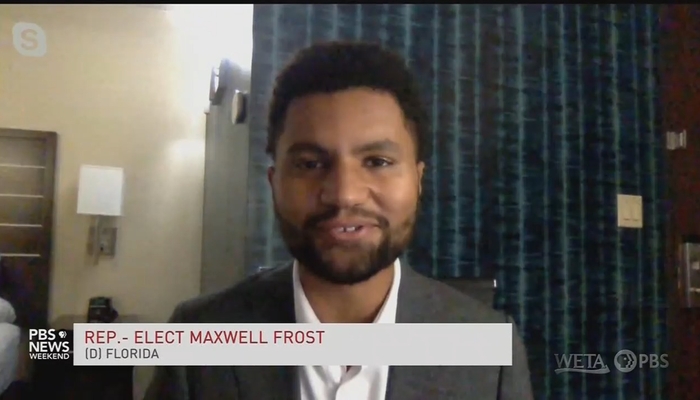 Alexandria Ocasio-Cortez recently turned 33, so it’s time for a younger socialist Democrat for the media to swoon over. In September, I found at least eight sappy national interviews with 25-year-old Maxwell Frost, who had won a primary to fill the seat of Rep. Val Demings, who ran for the Senate against Marco Rubio.

After he won the general election in a blue district by 19 points and became the first member of Generation Z to win a House seat, the swoon cycle began all over again.

National Public Radio repeatedly touted Frost. They boosted him online on Election Night, displaying several of his tweets, including one tweet from June, where he apparently heckled DeSantis at a Dave Rubin event.

I just asked @GovRonDeSantis to take action on gun violence so we can save lives. That we lose 100 people a day.

His response? “Nobody wants to hear from you!” We are dying and our Governor is too busy helping @RubinReport make money. pic.twitter.com/LUOWQq3kQU

NPR toasted him on Thursday night’s All Things Considered.  Anchor Elissa Nadworny explained “After the 2012 mass shooting at Sandy Hook Elementary School in Connecticut, Frost was drawn to anti-gun violence activism.” Then they did use the P-word: “He received support from high-profile progressives like Vermont Senator Bernie Sanders and Massachusetts Senator Elizabeth Warren.”

On Friday night, they scored an interview. It began:

AILSA CHANG: Well, you know, when I was 25, I was still living in a dorm room, so congratulations.

CHANG: So what do you see as the most urgent legislative priorities facing your generation?

She at least suggested it might not be easy to get his (socialist) agenda done in a Republican House.

On Saturday night, Frost drew a softball interview on PBS News Weekend. These are your tax dollars at work. Anchor Geoff Bennett could only manage questions a fifth-grader could have asked: So, what do you see as the significance of your win? The average age of a U.S. House member is 58, you were 25? What does that mean big picture?

….At night, you drove for Uber to make ends meet since you weren’t making money as a candidate. And that reality really rules out entire classes of people who might want to run for office, but just can’t make it work, can’t afford to do it.

….Your decision to run was driven in part by the issue of guns, gun control. Tell me more about that.

….What issues do you intend to focus on come January, when you’re sworn in?

Once again, Frost made appearances on MSNBC, on Ari Melber’s show The Beat on Thursday and All In with Chris Hayes on Friday. Melber gushed:

People are going to look to you as a voice of this generation. I’m just curious, since we’re talking here for the first time, and I hope you’ll come back. What do you think is most misunderstood about people in their 20s or what they’re going through in America right now, perhaps by older people, people like us in the press?

Oh sure, the press is such a problem for this guy. CNN’s Wolf Blitzer did the same routine on Saturday’s Situation Room.