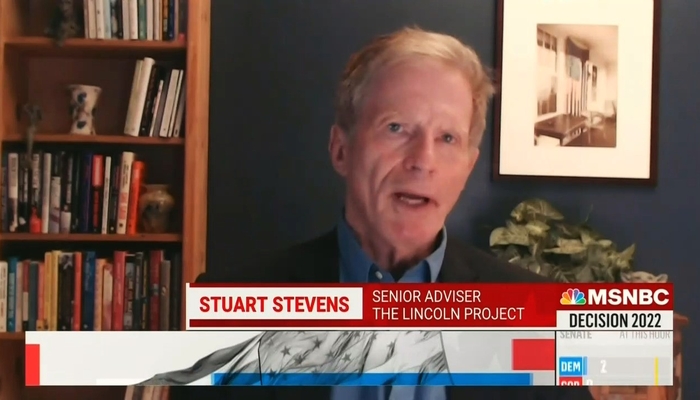 The “mainstream media” might want to be seen as supportive of a healthy two-party system. But that’s not the reality. That’s how you become the darling of our Republican-hating “mainstream” media, touted as a “Republican strategist.”  They say they love “democracy,” but despise an oppositional party!

It doesn’t matter who the leader is. On Veterans Day, the Lincoln Project tweeted “Don’t be fooled. DeSantis is a more polished, but equally evil, version of Trump.” Later they added: “Extremists like DeSantis don’t have as much baggage as Trump, which makes it easier for them to fool voters into thinking they’re a sane choice.” There apparently is no sane choice, except to choose a Democrat.

In case you missed it, we have a new study out on the late-night network comedy shows. Alex Christy counted all the guests from Labor Day through the Monday night before election day. It was 47 to nothing, zero, zip. There were 21 partisan officials and offspring like Chelsea Clinton. There were 26 journalists or celebrities from the so-called mainstream media and mainstream Hollywood.

Then we explore the post-election huzzahs over 25-year-old Democrat socialist Maxwell Alejandro Frost, the first “Generation Z” member elected to Congress from the Orlando area. NPR promoted him like a new Taylor Swift album. PBS also threw him softball questions over the weekend. That’s your tax dollars at work. Of course, MSNBC also tried to blow the wind beneath his wings.