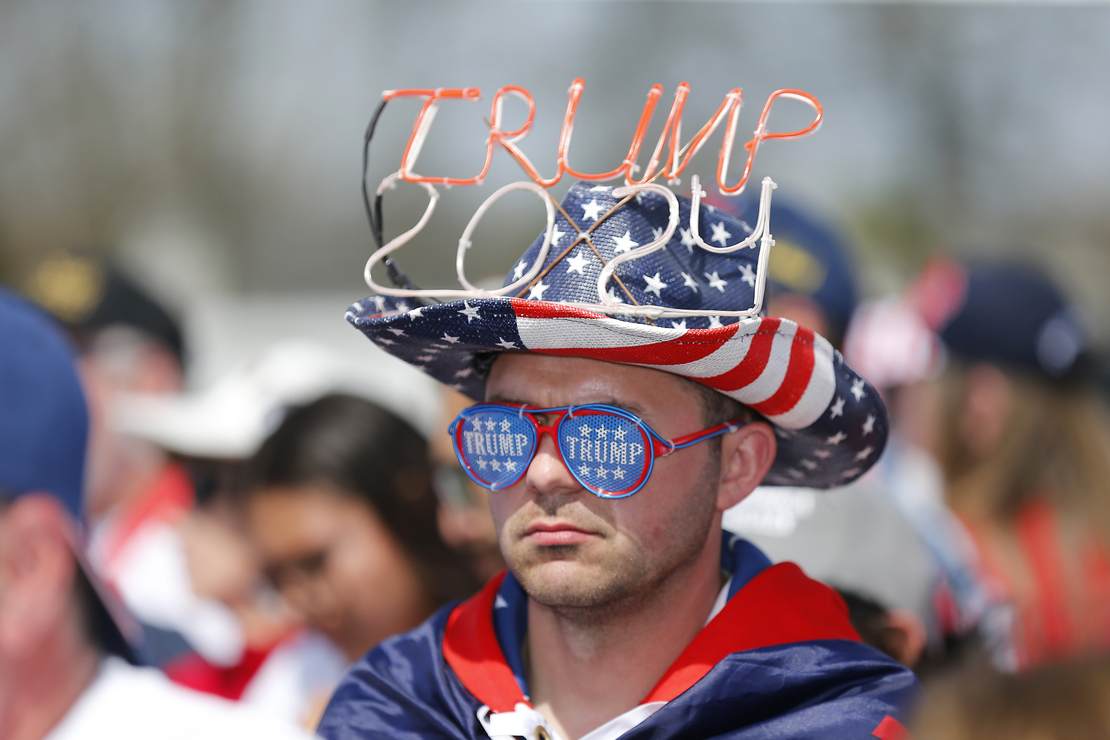 I like President Trump. You all know that. Anyone can go back to 2016 and see what I wrote back then. It was column after column of praise for Trump. I loved his rallies, I loved the hat, I loved the message, and I loved most of his presidency. I did so much cheerleading for Trump that my PJ Media colleagues would regularly tease me about it. (Ask Kruiser.) Things took a turn for me after the 2020 election. I can pretty much put a finger on a few events where it went wrong. A few days after the 2020 election, I wrote this:

Complaining about what you think happened, but didn’t prove, years after is just weak. It didn’t help that Trump allowed people like Lin Wood, a total weirdo, to take over the narrative. Then there was the mishandling of the January 6 fallout. The FBI was allowed to run roughshod over the rights of citizens who were peacefully protesting on that day. I wrote about “Baked Alaska” and his experience with the FBI after he videoed himself walking through the Capitol on January 6th. He committed no violence. He ended up pleading guilty to one count of “parading through the Capitol.” He is going to be sentenced in January.

Gionet shared the brutal treatment he received at the hands of the FBI, including threats to lock him up for twenty years if he did not give up the identities of some of the people in the Capitol with him.

Gionet told Yiannopoulos that he is still undecided as to whether he will cooperate or not. Gionet was charged with “unlawful entry, violent entry, and disorderly conduct on Capitol grounds.” He was also criticized by the press for speaking harshly to police officers, an act that is legally protected in America. Despite these light charges, Gionet told Yiannopoulos he was kept in solitary confinement and treated like a prisoner on death row before his release to await trial.

Trump didn’t bother to pardon any of those people in solitary confinement for walking through the Capitol on his way out of the White House. Why? That inaction left me with a very bad taste in my mouth.

Trump was ignoring the pain of his supporters for a long time before the January 6th protests, when MAGA was getting beaten in the streets by Antifa just for attending his rallies or wearing his election gear. I wrote this after the 2020 loss to remind everyone that Trump doesn’t really have his priorities in order.

I know most of you are still raw and upset over the shenanigans during this election and feel like you have to support this president no matter what he does but I refuse to stay quiet when my guy screws up. It’s dishonest. My colleagues tease me constantly about being a fangirl for the president. It’s a label I don’t mind most of the time. After all, I’m a fan of Trump’s policies, his humor, and his presidency. I have been since the beginning. But it is also true that he is not perfect. One of his major imperfections is his inability or unwillingness to do more to protect his base from violence perpetrated by the enemies of freedom.

The real goal of political violence is to oppose free expression, free speech, and freedom to assemble. The people using violence are trying to intimidate their opponents into silence out of fear so they can impose their will by force on an unwilling segment of the population. It’s the most un-American activity there is. Yet, the president has done very little over the last five years to stop it. Worse, he hasn’t even taken basic steps to protect his supporters from it. I’m not the only one to have noticed.

Matt Walsh of the Daily Wire wrote, “Trump’s supporters have been attacked and harassed for four years while Trump himself does almost nothing to stop it or defend them. It’s happening again tonight. The guy has a couple months left in office. If he doesn’t bring the hammer down now then when? Still he just tweets.”

Trump has a maddening self-centeredness that should not be excused or ignored. It manifests in all kinds of ways that hurt his supporters, but perhaps worst is his refusal to come out against the psychological operation that is “Q.” The phenomenon known as “Q”—an anonymous poster on 8kun who claims to have high-level intelligence clearance and who talks in riddles and codes and points followers to nebulous conspiracies that involve Donald Trump as the hero who overcomes the “Deep State” through clandestine secret operations—used to be funny to me. I found it amusing and entertaining to listen to people’s interpretations of the riddles.

But then it got dark. Somewhere along the way, the tales about Trump thwarting Deep State plots against him turned into horror fantasies about raped children and murder and torture. These tales took over the minds of some of the people who obsessively followed “Q drops,” and grifters put out tons of content based on these wild tales of gore and torture and gathered massive followings. It created a whole new sub-culture on YouTube where entire communities thrived by exchanging terrifying theories about child trafficking networks and torture and rape scenarios.

It was truly horrific stuff.

The mainstream media blamed Trump because he would not denounce it. In fact, he appeared to encourage it by pointing out Q supporters at his rallies with signs that said “the storm is upon us” and other Q-related jargon. But the one thing the media never did was ask Trump about it directly—at least I never heard anyone do that. And it did seem convenient for left-leaning media to allow this to continue making MAGA nation look crazier by the day as many of them went down rabbit holes on the internet and repeated and shared fake stories that had no basis in reality.

Much hay was made by media outlets about who Q could be. Some people took credit for it, and some journalists claimed to know who it was, but no one really knows. The FBI even declared Q a domestic terror threat and yet somehow failed to find out who was making the postings.

It came to a head right before the election of 2020 when several people were arrested for “Q” crimes. One of them, Cynthia Abcug, was a mom whose tragic encounter with CPS in Colorado turned into an insane nightmare out of a movie plot right in front of me. I had been covering her case when a group of Q-grifters insinuated themselves into her life and convinced her she was in danger and needed to flee from the “Deep State.” This led to her arrest and conviction for crimes I don’t believe she committed. You can read about that in my coverage.

Following this group of grifters who were making money and gathering clout on their live streams, I learned that the number of people profiting off the Q delusion was numerous. While some of them were good people, others were criminals and they didn’t seem to care who got hurt. Neely Blanchard was another mother who was arrested for kidnapping her own children from foster care. She was targeted by the same sovereign citizen grifters who targeted Abcug and who told Blanchard that the Deep State was trafficking her children and the only way she could save them was to take them and run. She eventually (allegedly) shot Christopher Hallett, one of the true Q-believers, and Blanchard is going on trial for his murder this winter.

When an internet conspiracy turns into jail time and murder, it’s not harmless fun anymore. Perhaps the FBI was right to classify Q as a domestic terror threat. I don’t know. But I do know that Trump running again will only fuel these groups again. Despite the fact that Q disappeared from 8kun after January 6 (after the maximum damage was conveniently done to Trump), the true believers are still keeping the grift going.

The hashtags are still circulating. The content is still being made. Communities, while more underground and on alternative platforms like Telegram and Bitchute, are still there feeding the paranoia of traumatized parents who are dealing with child protective services. I wish Trump would finally come out and tell people that none of it had anything to do with him and that the people were scammed. But he doesn’t appear to want to. And is it because the Q folks are his most rabid fans? These are people who have convinced themselves that Trump isn’t just a good candidate for president but that he is the savior of humanity itself.

This is a cult, and Trump seems to like the adoration.

A responsible person would put a stop to it. The one person the cult members would listen to is Trump himself. In my opinion, if he doesn’t end it, he isn’t fit to be president again. That’s a tough thing for me to say, but I witnessed the damage that these Q people have done to the lives of others in Trump’s name. If it were me, I would want people to know they were scammed. Why doesn’t Trump want that?

I couldn’t hide my frustration at Trump’s announcement that he was running again. I had a small hope that he would hand the baton to the younger generation, the less battered candidates, the people who have a real chance at winning. But Trump can’t see past himself and he probably never will.

You can watch my reaction as it was happening live below.

Sellin: If Corrupt Tyrants Intend to Govern Illegitimately, Then Stand Up Against the Tyrants
It Is Time to End the COVID-19 Vaccine Mandates
UNHINGED: CNN Analyst Says Free Speech Is ‘Nonsense’
Good Neighbors With Guns Detain Man Who Broke Into a Michigan Home With Children Inside
‘Nothing less than child abuse’: Tulsi Gabbard blasts Biden for his role in helping drive 389% increase in mastectomies on little girls