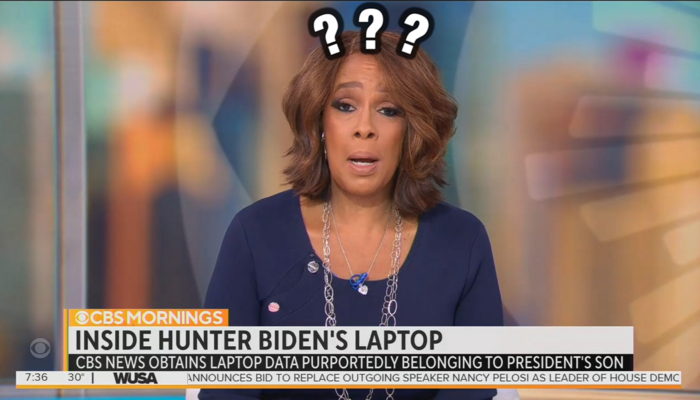 Well, it took a couple of years, but CBS has finally — finally! — admitted that Hunter Biden’s laptop is real. On Monday, November 21, CBS Mornings aired a report which acknowledged the authenticity of the device’s nefarious contents.

So how long did it take CBS to join the rest of us in the land of reality? Their report on the laptop aired exactly 768 days after the New York Post published their exposé on October 14, 2020 (that’s two years and change, 25 months, 109 weeks, or 69.8 Scaramucci’s).

A lot can happen in two years, so we decided to put together a list of things that somehow took less time than CBS took to finally admit to the existence of Hunter Biden’s laptop:

1) The Special Counsel Investigation of Donald Trump (675 days)
Readers may be surprised to learn learn that Robert Mueller’s Trump-Russia investigation actually lasted less than two full calendar years (May 17, 2017 to March 22, 2019). That’s probably because it was pretty much the only thing the entire establishment media felt like talking about.

3) The combined presidencies of Garfield, Harrison, and Taylor (723 days)
William Henry Harrison lasted only 32 days as President before succumbing to illness — probably typhoid, according to historians. James Garfield didn’t do much better, lasting just 199 days, while Zachary Taylor at least made it a year in office before he too succumbed after 492 days in office.

4) The entire production process of Casablanca, from writing to release (~450 days)
The script was adapted from a failed play in late 1941. Casting and shooting started shortly thereafter, and the film was released in the United States in January of 1943.

5) The Mexican-American War (648 days) and U.S. involvement in WWI (584 days)
While World War I went on in its entirety for about four years, the United States didn’t officially enter the conflict until April of 1917. The war officially ended on November 11, 1918.

7) Donald Trump’s Twitter ban (680 days)
Trump was banned shortly before leaving office, on January 8, 2021. Last week, Twitter CEO Elon Musk ran a poll asking respondents whether he should reinstate the former president, which ended with just over 51 percent in support on November 19, 2022.

8) Frank Giannino, Jr.’s 3,100-mile run across the continental U.S. in 1980 (46 days)
Just for fun, we crunched the numbers and found that, with a full week of rest in between each trip, a person maintaining Giannino’s pace could do this run 15 times in less than 768 days.

9) Johnny Depp and Amber Heard’s marriage (712 days)
To be fair, 712 days is still a remarkably long time for a human to stay married to any celebrity.

10) Construction of the average 20-unit apartment building (540 days)
According to the National Association of Home Builders’s 2021 Survey of Construction, it takes an average of 17.5 months to build an apartment building in the U.S. Even if one were to factor in the average two-month authorization period, you could still get a fully functional multifamily housing complex up and running in under two years.

11) Construction of the Empire State Building (410 days)
Somehow this took less time in 1930 than the average 20-unit apartment building took in 2021. Make of that what you will.

12) The combined lifespan of CNN+ and Jake Tapper’s prime time show (???)
Science has not yet developed the tools to measure so brief a span of time.

A husband for Thanksgiving: An answer to persistent prayer
Judge orders Kroger to pay workers unjustly fired for refusing to wear LGBT pride symbols
How Can Dems ‘Stop This’? MSNBC Freaks Over Pending GOP Investigations & Committee Purges
‘The dinner tables turned’: PETA posts cartoon of turkey family preparing to eat a human
Elon Musk may reveal what happened behind the scenes of Twitter’s pre-election censorship of the Hunter Biden laptop story