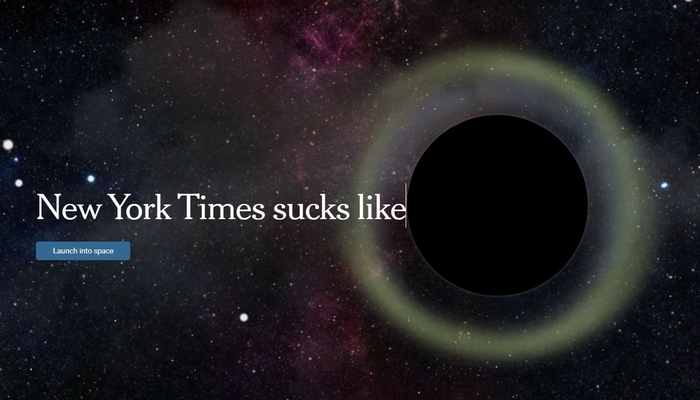 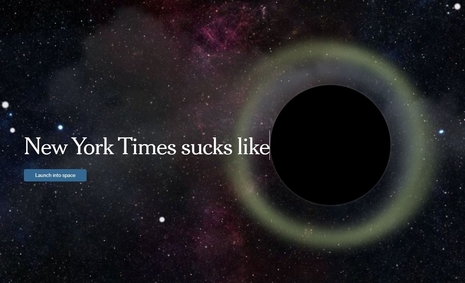 The New York Times is not taking Donald Trump’s recent presidential run announcement well, judging by the latest psychobabble emanating from the paper.

The latest is an interactive feature at nytimes.com: “Trump, the Black Hole and Me.” Yes, you can purge your anti-Trump emotions by typing them into a black void:

Did seeing Donald Trump back on the main stage stir up some old emotions? Write down what’s been swirling in your head. Go on, get it off your chest.

Once you submit your words to the void, then you are blessed with Healy’s oversharing, talking about him and his therapist commiserating over the Trump menace (though there’s a twist).:

When I was a political reporter at The Times covering the 2016 presidential race, a typical day went like this: Upwards of 16 Republican candidates would be crisscrossing the country, scrambling for slivers of voter and media attention, and then the 17th candidate, Donald Trump, would do something — hold a rally, give an interview, issue a statement, type a tweet — and all the political oxygen would be gone.

That may be an oversimplification, but Mr. Trump was a skilled disruptor, sucking up attention and knocking adversaries off kilter with blunt provocations like his juvenile tactics at the debates and his Muslim travel ban idea after a terrorist attack in California….his gravitational pull was unlike anything I’d ever seen in politics — relentless, immediate, destructive.

And it took a toll. How many people had their mental health affected by Mr. Trump? Are we supposed to think about the president on, like, a daily or hourly basis? I doubt even his supporters voted for that.

During those early Trump years, I saw a therapist who was helpful on many fronts, and I talked to him about the president from time to time. Those moments were a good stress relief: We would focus on the bigger picture, what I enjoyed in life and how the country had endured so much in its history.

In an amusing twist, it turned out Healy’s therapist was “an admirer and supporter of Mr. Trump.”

This bizarre, pseudo-primal scream outlet was designed by Talia Cotton with text by Healy, the paper’s deputy opinion editor and former politics editor and campaign reporter.

Healy excused himself and his fellow neurotic liberals from being fixated on Trump because the former president had “done so much damage.”

That apprehensiveness came rushing back as Mr. Trump’s announcement speech got underway in Florida on Tuesday night….How can he gloss over his record? How can he ignore the truth?

Just a few years ago Healy was posing as an objective Times political reporter, defending Bill Clinton along with bashing 2016 candidate Donald Trump.

Previously the Times handed out some snowflake-friendly tips to its overwhelmingly liberal readership on coping with election. The silly “5 ways to soothe election stress” included the suggestion “Plunge your face into a bowl with ice water…”