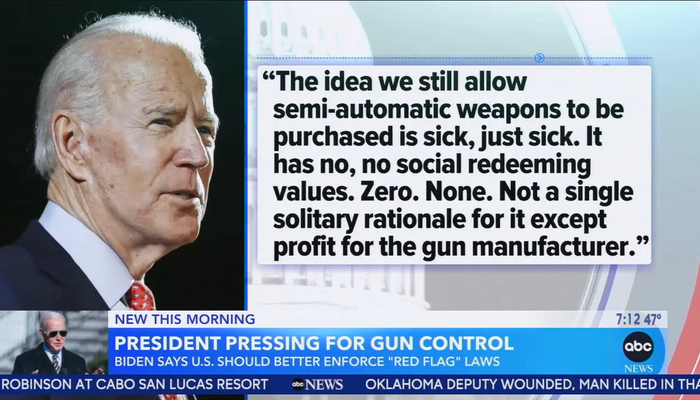 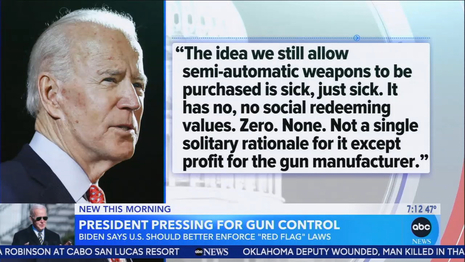 The three broadcast morning shows on Friday collectively donated four and a half minutes to President Biden’s empty vow to “get rid of assault weapons,” even though all of the correspondents agreed it would be “an incredible uphill battle” at best.

ABC’s MaryAlice Parks told viewers that “President Biden is passionate about this,” while NBC’s Kelly O’Donnell was impressed by Biden’s “visceral” reaction to a pair of recent shootings where the motives have yet to be established.

All three networks gravitated to Biden’s slam that it is “sick” to “allow” semi-automatic weapons to continue to be sold (ABC inexplicably did not have any video), and CBS and NBC both aired the interaction between the President and a pool reporter on Thursday, where the reporter pushed Biden from the left: “Can you do anything about gun laws during the lame duck, sir?…What will you try and do?”

To which Biden made the impossible promise that all three networks touted as news: “I’m going to try to get rid of assault weapons.”

These networks’ post-Thanksgiving tribute to Biden’s visceral passion to slam gun manufacturers was brought to you by Simplisafe (ABC), Google phone (CBS) and Progressive insurance (NBC).

Below are transcripts of the relevant portions of Friday’s (November 25) morning shows (click expand to view).

Fill-in host WHIT JOHNSON: Now to President Biden’s remarks on gun control following the mass shootings of the past seven days. ABC’s MaryAlice Parks is in Nantucket where the President is spending the holiday. MaryAlice, good morning to you.

MARYALICE PARKS: Whit, good morning. The President over the holiday spoke briefly to reporters about these two devastating mass shootings in Colorado and Virginia. He said he wants to see red flag laws used more and better enforced. Both those states have such laws on the books, where, if a judge agrees, a family member or law enforcement can move to remove any weapons from a person who might be seen as a danger.

And the President again called for a ban on assault weapons. He said, quote, “the idea we still allow semiautomatic weapons to be purchased is sick, just sick. It has no social redeeming values. Zero, none.”

President Biden is passionate about this. He said he’s going to continue to try to get votes for this in Congress but, of course, passing any ban like this would be an incredible uphill battle. The reality is he couldn’t get this done when Democrats had control of both chambers and, of course, next year Republicans will control the House…. 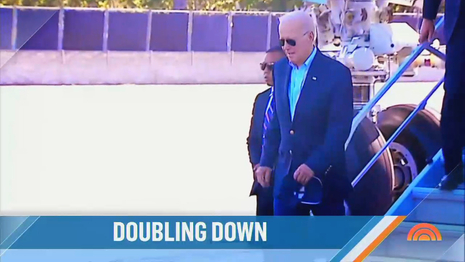 Fill-in host PETER ALEXANDER: Doubling down: President Biden announcing he is renewing his effort to ban assault rifles in the wake of a string of mass shootings. We go inside the President’s Thanksgiving Day push, and whether or not he can get Congress onboard.

KELLY O’DONNELL: The President renewed his push for an assault weapons ban during a stop here in Nantucket at a local fire station to offer good wishes for the Thanksgiving holiday, and he talked with reporters who asked for his reaction to that deadly shooting at a Walmart in Chesapeake, Virginia. The President’s response was visceral.

BIDEN: The idea we still allow semiautomatic weapons to be purchased is sick.

REPORTER: Can you do anything about gun laws during the lame duck, sir?

BIDEN: I will try.

POOL REPORTER: What will you try and do?

BIDEN: I’m going to try to get rid of assault weapons.

O’DONNELL: But getting an actual bill passed is politically very difficult, we know that. The current Congress with Democrats in charge of both the House and the Senate has just weeks left to serve, and the President did not commit to trying to go for new legislation, saying he needed to make an assessment about how many votes are actually there….

BIDEN: The idea we still allow semiautomatic weapons to be purchased is sick.

[After running video of Biden’s exchange with the pool reporter.]

ERROL BARNETT: The reality is legislative action on guns will be more challenging when Republicans take control of the House come the new year. Our Weijia Jiang is traveling with the President on Nantucket Island, Massachusetts, and she joins us now. Weijia, good morning to you. 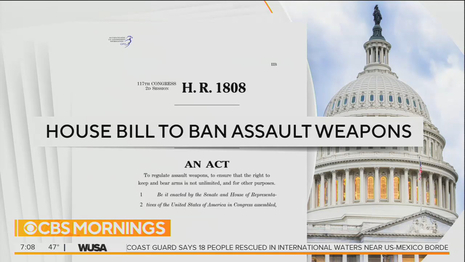 WEIJIA JIANG: Good morning Errol, and good morning to everybody. President Biden went on to acknowledge that getting rid of assault rifles of course depends on whether or not he has the votes to pass legislation, and right now it does not appear that he does. The Democratic-controlled House passed a bill to ban assault weapons earlier this year, but with such a narrow majority in the Senate the measure hasn’t had enough support to advance….