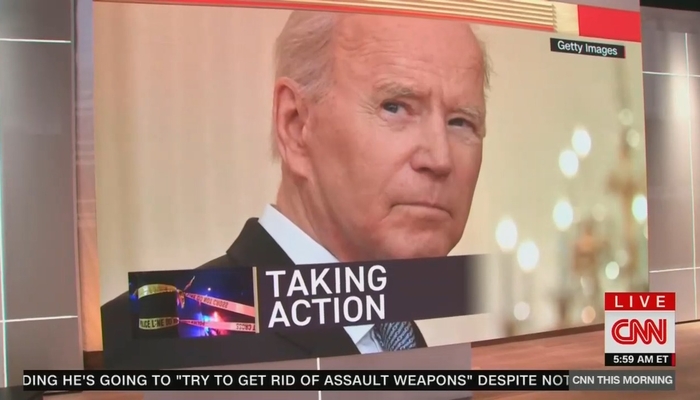 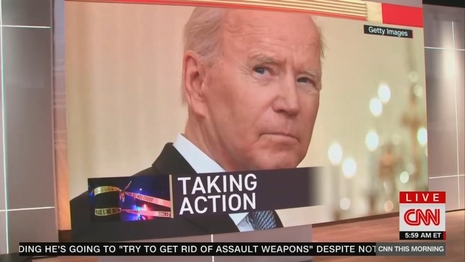 It’s been more than a half-century since Joe Biden was first elected to public office.

Even for a guy who finished near the bottom of his law school class, you figure that’d be long enough for Biden to understand what “semi-automatic weapons” are.

Friday’s CNN This Morning led with talk of the president “taking action” on guns in the wake of recent mass shootings. Don Lemon said Biden was “railing against access to assault weapons in this country.” Then Biden denounced guns as he vacationed in Nantucket:

“The idea we still allow semi-automatic weapons to be purchased is sick! It’s just sick! It has no, no, socially redeeming value. Zero. None. Not a single, solitary rationale for it except profits for the gun manufacturers. ”

So, if able, Biden would prohibit Americans from buying “semi-automatic weapons?”

Joe, let’s keep this simple for you. Here’s the Cliffs Notes version of the meaning of a “semi-automatic weapon:” you pull the trigger, it fires one round. Got that?

Americans already lawfully own countless millions of such weapons. Would Biden make it illegal to buy a typical deer rifle? Or make criminals of individuals who for reasons of their own decide to sell such weapons?

Don Lemon, who ran the segment, naturally did nothing to correct Biden’s faulty understanding. For that matter, FanDuel odds on whether Lemon himself could explain the difference between semiautomatic and automatic weapons?

Biden’s statement was followed by a reasonably fair ‘n balanced report by CNN White House correspondent Jeremy Diamond. He acknowledged that, realistically, there’s little Biden can do to ban guns before the Republicans take over the House majority in January. He went on to talk realpolitik: “the White House also sees some political value in talking about this, [as] something that’s galvanizing for Democrats and the Democratic base.”

But Diamond did say something that was absurd on his face. He claimed, “there’s no question that the president is sincere in his desire to want to get this done.”

How can Diamond possibly know what Biden is “sincere” about? Does even Biden himself—who went from being pro-life to pro-choice-with-no-restrictions—know what he is “sincere” about—or is it all a matter of the political expediency of the moment?

For that matter, if Biden did manage to somehow get an “assault weapons” ban into law, he could be handing Republicans a good issue for 2024. Something that—in Diamond’s words—would be “galvanizing” for the Republican base. So it’s just as likely that Biden wants to sound tough on guns, but in his heart of hearts, he knows those Second Amendment hordes aren’t going to let much of anything to happen.

PS: Speaking of being “tough,” Biden’s tough-guy look of a cap pulled down over shades was undermined by the lid’s label: “Nantucket”—that chichi isle where the uber-elite like Joe and Mika go to “summer.”

On CNN This Morning, Don Lemon failing to correct Joe Biden’s faulty understanding of “semi-automatic weapons” was sponsored in part by Liberty Mutual, Pfizer, and Abbott, maker of Rinvoq.

DON LEMON: We want to tell you what’s happening with President Joe Biden, railing against access to assault weapons in this country in the wake of the three most recent mass shootings in Virginia and in Colorado.

JOE BIDEN: The idea we still allow semi-automatic weapons to be purchased is sick! It’s just sick! It has no, no, socially-redeeming value. Zero. None. Not a single, solitary rationale for it except profits for the gun manufacturers.

REPORTER: Can you do anything about gun laws during the lame duck, sir?

REPORTER: What will you try to do?

BIDEN: I’m going to try to get rid of assault weapons.

LEMON: So what, if anything, can the president actually get done before Republicans take control of the House come January? Let’s bring in CNN’s Jeremy Diamond for us this morning, live at the White House.

Hello, Jeremy. What can the president get done?

Remember that President Biden, during these midterm campaigns, he repeatedly urged voters to elect more Democrats to Congress, to be able to pass this assault weapons ban. The reality is that while Dems, Democrats, are going to be losing the House of Representatives, even now with that majority in the House, the Senate, they just don’t have the 60 votes to get over the filibuster to be able pass that ban on assault weapons.

There’s no question that the president is sincere in his desire to want to get this done, but the White House also sees some political value in talking about this, and consistently calling for this ban on assault weapons. They see it as something that is broadly popular with the American public, and also something that, of course, is a galvanizing issue for Democrats, and the Democratic base.