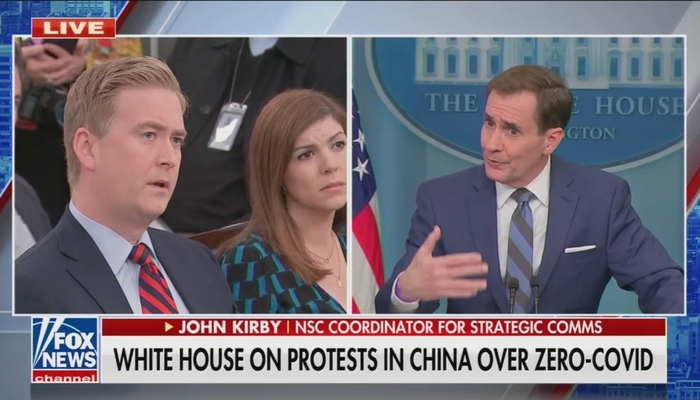 But it was CBS’s Ed O’Keefe who provided some bite standing up for the protests, which made sense seeing as how competitors ABC is owned by Disney (with business in China) and NBC having a correspondent still in China.

O’Keefe poked holes in this esoteric statement of support: “In that realm, the statement you issued — or that was issued earlier today didn’t include any explicit calls for China to stop detaining and harming protesters and journalists. Why not?”

Kirby didn’t go any further other than to add “we’re going to watch this closely, and we’ll see where things go.”

AFP’s Sebastian Smith brought up an important question as to whether this has received any additional priority from the President: “Could you give us a sense of how much the President is engaging with this issue? Is he watching it personally, you know, getting updated more than on, maybe, some other things?”

Kirby scoffed at that, insisting Biden’s “staying briefed on what’s going on inside China” before joking “I’ve never been in the room where he wasn’t, like, closely briefed.”

Coming from the left, Yahoo! News’s Alexander Nazaryan argued people “assume that the United States supports peaceful protest around the world” and such a take isn’t “a novel position.”

Given the stakes, Nazarayan wondered, why hasn’t the administration gone further “to…assert the rights of people, advocating for freedom and democracy more forcefully than perhaps we have.”

Kirby cowardly sought to not anger the communist thugs and replied the U.S. has reemphasized in this moment it’s ongoing belief in “free assembly and…peaceful protest” and that this is an issue “for the Chinese people and the Chinese government to speak to.”

Doocy Time finally arrived, beginning with one about China: “[W]hy is the White House’s line that ‘everybody has the right to peacefully protest’ and not ‘the U.S. thinks it’s bad to lock people up in their houses to stop COVID?’”

After Kirby claimed “a lockdown is not a policy that we’re going to support here,” Doocy changed gears to Venezuela and lifting sanctions on the socialist Maduro regime (click “expand”):

DOOCY: [A]nd on the sanctions relief for Venezuela —

DOOCY: — why is it that President Biden would rather let U.S. companies drill for oil in Venezuela than here in the U.S.?

KIRBY: That’s not an accurate take on the President’s view.

KIRBY: The President has issued 9,000 permits for drilling on U.S. federal lands, Peter; 9,000 of them are being unused. There are plenty of opportunities for oil and gas companies to drill here in the United States. Now, I’ll let Chevron speak for this particular issue of sanctions relief, but our expectation is it won’t be a lot of oil coming out of there.  It will have to be shipped to the United States.

DOOCY: Does the President think there’s some benefit to the climate to drill oil in Venezuela and not here?

KIRBY: No, it has nothing to do with a benefit to the climate, Peter. Again, there are 9,000 unused permits here in the United States on federal land that oil and gas companies can and should take advantage of. Nine thousand and we’re talking about one there in Venezuela. Now, look, it remains to be seen how much will get drilled down there. It’ll be up to Chevron to decide that, Peter. But — but as a function of the sanction itself, that oil, whatever product is drilled, has to come to the United States.

And finally, the great Philip Wegmann of Real Clear Politics had perhaps the question of the briefing: “[W]hat is the President’s reaction when he hears protesters in China chant ‘freedom’ or ‘Xi Jinping step down’?”

Kirby wouldn’t touch it with a ten-foot pole: “The President is not going to speak for protesters around the world; they’re speaking for themselves.”

WEGMANN: And so there’s no reaction?

KIRBY: These protesters are speaking for themselves. What we are doing is making it clear that we support the right of peaceful protest.

Tying the war in Ukraine to China’s authoritarian movements, Wegmann questioned whether “the backlog of arms shipments to Taiwan” has been “a result of our stepped-up efforts to send arms to Ukraine.”

Kirby made clear he wasn’t going to get into specifics other than to state in vague terms that “we are constantly balancing, as we must, our own inventories, the inventories of our allies and partners and people that we do conduct arm sales with.”