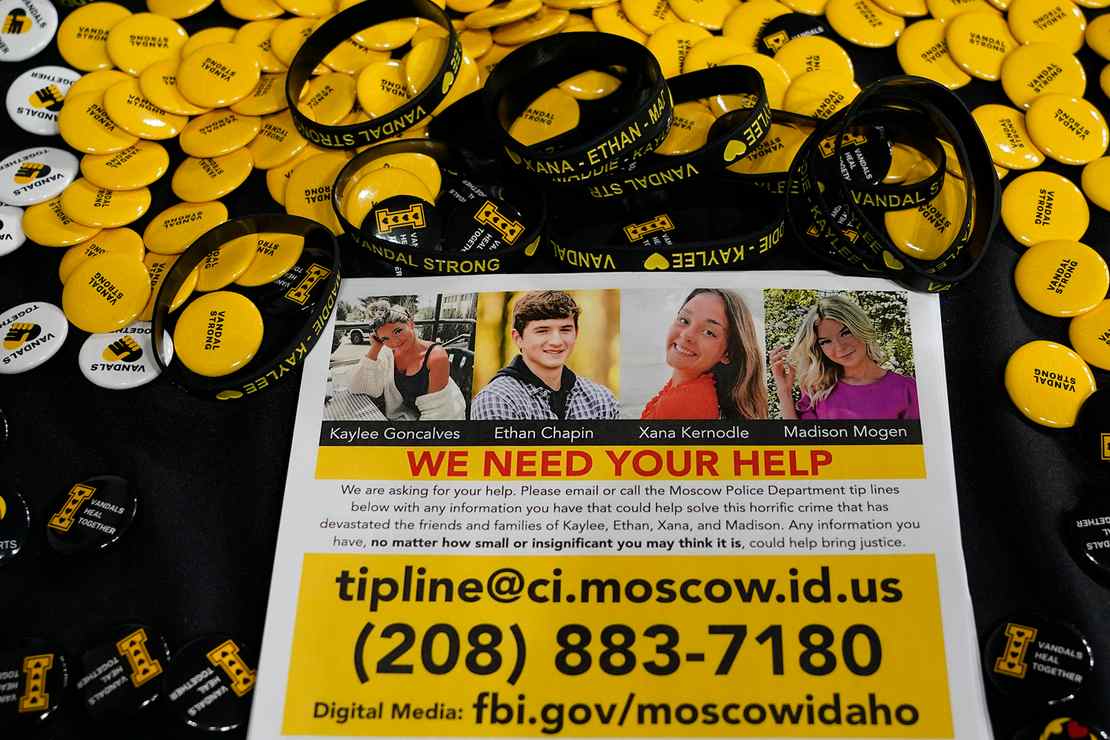 Now that Moscow police in Idaho have admitted they do not know if the brutal quadruple homicide of four university students, while they slept, was random or targeted, many people have begun to fear there a serial killer is on the loose and may have been for months. Eerily similar unsolved murders and attacks are being looked at more closely.

The University of Idaho murders happened on November 13 at around 3 a.m. in the morning.

The Idaho Tribune reported that on June 14, 2021, the body of Sandra Ladd was found in her kitchen in Washougal, Washington, with stab wounds to the stomach. It is believed she could have been murdered on the 13th.

“Ladd was presumably sleeping in her Washougal, WA home, possibly in the late hours of the 13th, when an unknown intruder entered her residence and stabbed her to death. Her crime was never solved,” the Tribune reported.

Then on August 13, 2021, in Portland, Oregon, which is just under a two-hour drive from Washougal, Travis and Jamilyn Juetten were attacked in their bed as they slept at 3 a.m. Travis died from his injuries, but Jamilyn survived 19 stab wounds. The attacker was described as wearing a mask and was scared off when confronted by a third person in the home. He was not apprehended.

The Moscow police have denied there is any connection between the university killings and any of these cases. PJ Media reached out to police in Washougal and was told that Moscow police have not contacted them about the Ladd case. “Investigators have not reached out to us and there is not any reason to believe that there’s a connection,” said Captain Zane Freschette.

It might not be related as police claim, but it is interesting that there have been two unsolved stabbings on 6/13 and the 8/13 both around 3am not too far from University of Idaho. @IdahoTribune reported. Maybe the increased attention will help solve these two. pic.twitter.com/69EIDe8dyG

Another disturbing fact that Moscow police also say is not related is the unsolved skinning of a family pet in Moscow in October, just a month before the university slayings. The New York Post reported that Buddy was a sweet 12-year-old mini Australian shepherd whose owners, Pam and Jim Colbert, let him out on October 21 and found him skinned and filleted. “They cut him around the neck and just skinned him. His little legs had fur and his little face had fur, but the rest of him was just skinned,” said Pam, 78. “They cut him like you filet a fish. We found his collar, but we didn’t find the pelt.”

FBI profilers have long identified animal mutilation as a common trait in serial killers. Jack Levin, co-director of the Brudnick Center on Violence and Conflict at Northeastern University, and Arnold Arluke, vice president and director of research for Forensic Veterinary Investigations in Boston, wrote an editorial in 2016 about this phenomenon that was published in the New York Post.

Animal abusers are five times more likely to commit acts of human violence.
Serial killers frequently begin by torturing and killing animals. “Boston Strangler” Albert DeSalvo trapped dogs and cats in wooden crates and shot them with a bow and arrow. John Wayne Gacy, who murdered 33 men and boys in his suburban Chicago home, tortured turkeys by throwing balloons filled with gasoline and then igniting the birds.

Ted Bundy, who took the lives of female students on several college campuses around the country, had mutilated dogs and cats as a child.

In most cases, sadistic killers employ a version of the same methods on humans as they did on animals. Lee Malvo, one of the two DC snipers, used a slingshot and marbles to kill stray cats.

John Wayne Gacy tortured turkeys by throwing balloons filled with gasoline and then igniting the birds.
Jeffrey Dahmer strangled and dismembered 17 men and then kept their decomposing bodies in a barrel of acid. In childhood, he would reportedly kill animals to skin and soak their bones in acid before mounting their heads on stakes in the back yard.

“Everybody is very nervous and scared. This is something awful and evil,” Pam told reporters. “We let Buddy out and somebody must have been waiting out there. Bud never leaves the yard but this person grabbed Buddy.” Buddy wasn’t the only mutilated animal in Moscow. Pam’s husband Jim found a mangled rabbit that had its ears sliced off and its head cut open. “It had the head sliced right open and you could see the brain,” he told the news outlet.

No one was arrested for Buddy’s killing.

RELATED: 4 Reasons Police Haven’t Arrested or Named a Suspect in the Idaho 4 Murders

Moscow police have said publicly that Buddy’s case is not connected to the university murders but now that they’ve admitted they don’t know if the victims were targeted specifically or not, what police are saying publicly may not always be accurate. Whether Buddy’s killer is connected to the quadruple murder or not, authorities should want to know who did this horrific thing and put him or her on a budding serial killer watch list (and prosecute the perp for the crime against Buddy).

I am still concerned about who brutally murdered the dog. Just sayin. #idahohomicides pic.twitter.com/5tIC3XkT7K

The Idaho Statesman is reporting that University of Idaho students are returning to campus armed to the teeth.

“I’ve always wanted to get a handgun,” [a student] told the paper. “But I haven’t really had a reason to get one until now. The main thing I’ve been hearing from people is to keep a firearm or something else for self-defense.”

Last week, the local Walmart on West Pullman Road was sold out of the chemical. The store doesn’t sell handguns but another retailer in town, Tri-State Outfitters, does. Employees at Tri-State declined to answer questions about increased demand for self-defense weapons and said corporate instructed them not to speak with reporters.

There are also reports of sororities hosting self-defense events and providing personal alarms that emit a piercing sound when activated.

Moscow police released a statement today that said “Idaho State Police Forensic Services crime lab scientists have worked on this case for weeks and have provided testing and analysis results to detectives. As they complete additional tests, those results will also be provided. To protect the investigation’s integrity, specific results will not be released.”

The Lancet, which scammed the world by publishing a rigged study against ivermectin, now says climate change is a “medical emergency”
David DePape confesses to hammer attack in interrogation audio, issues chilling new statement: ‘So sorry I didn’t get more of them’
‘American Taliban’ Was Released Early — and Promptly Met with an ISIS Recruiter
How and Why the Left Is Making the Memphis Cops Into ‘Racists’
UKRAINE WAR: Here Comes the Russian Wave