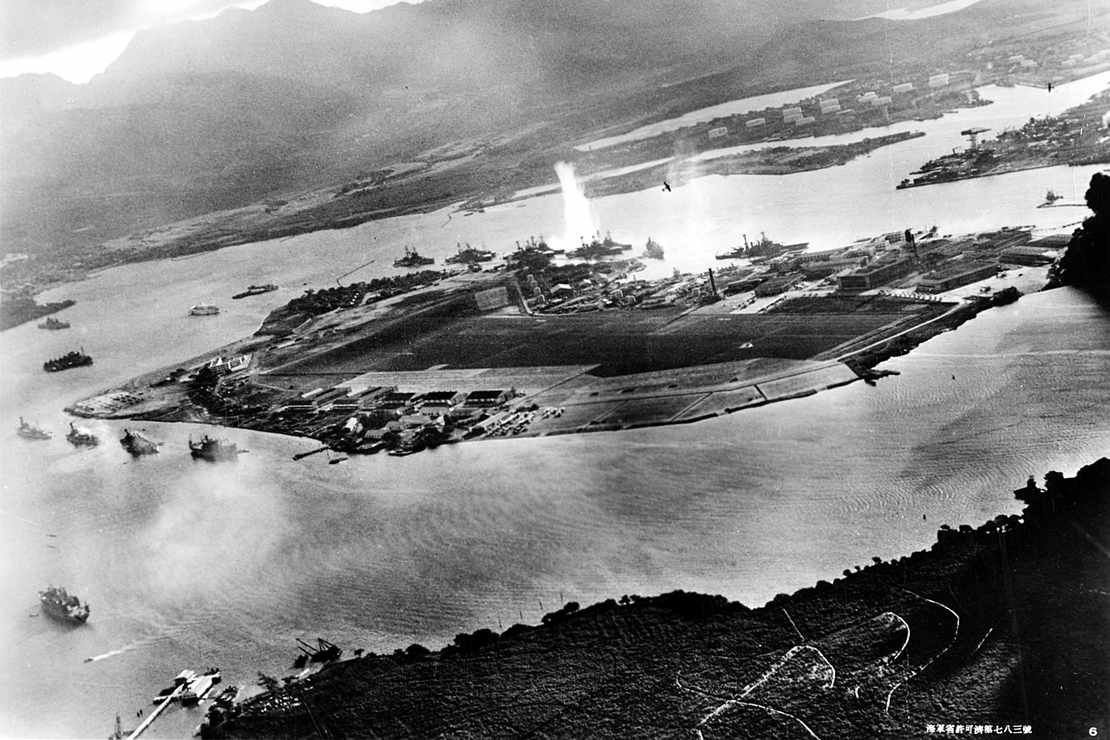 Kidō Butai — the six fleet aircraft carriers at the heart of Imperial Japan’s naval striking power — formed up on November 26, 1941, in the icy waters off Japan’s Kuril Islands with the battleships Hiei and Kirishima, two heavy cruisers, one light cruiser, and assorted destroyers, subs, and tankers. Their route through the north Pacific would keep them well out of sight of expected enemy patrols. Four days later, on December 3, they turned sharply south to descend on Pearl Harbor.

Their target: The U.S. Navy warships stationed at Pearl Harbor.

Despite all the firepower represented by the IJN surface combatants, they did not take part in the raid. While neither the U.S. nor Imperial Japanese navies were ready to fully admit it yet, by 1941 the aircraft carrier was the decisive platform in naval combat.

The IJN’s half-dozen flattops carried 414 aircraft to be launched in three waves against the high-value targets sitting pretty at Pearl. Japanese commander Admiral Chūichi Nagumo had designated the eight U.S. battleships as the primary targets, along with any carriers.

The first two waves sank four battleships, including the Arizona. Another four were damaged, along with three cruisers and three destroyers. About 350 American aircraft were destroyed or damaged. Japanese losses were minimal: a few midget subs, 29 planes destroyed, and another 74 damaged.

64 Japanese were killed. The United States lost the 2,335 killed that morning, and another 1,143 were wounded.

The chaos on the ground was extreme. No one knew if Japanese naval infantry were about to storm the beaches and take the island for the Emperor.

Nagumo never launched the third wave, which would have knocked out our oil storage units, effectively knocking the Navy’s most important Pacific naval base out of action for months or longer. But Nagumo couldn’t find the American carriers and worried about their planes counterattacking his Kidō Butai.

While Nagumo has been criticized for his decision, in my mind, Nagumo’s discretion was the better part of valor. He’d just given a deadly lesson about what happens to surface warships deprived of air cover, and he didn’t want to risk the same happening to his own.

The heroism of the men that day… I can’t do them justice, so I won’t try, certainly not in one brief column.

But there is one thing I can do to preserve something of their memory.

I’d like to try and dispel any notion that those men were President Franklin Roosevelt’s pawns, sacrificed by him as part of a conspiracy to draw us into war.

There are various conspiracy theories “proving” that FDR knew of the attack on Pearl Harbor in advance. Our missing aircraft carriers tell me that everyone from Dorie Miller all the way up to FDR got caught by surprise 81 years ago today.

Also for our VIPs: Starlink: The Good, the Bad, and the Pretty Dang Impressive

It is true that the U.S. military suspected the Japanese might start a Pacific War with a surprise naval attack, just like they had against the Russian Empire in 1904. But the attack, should it come, was not expected to hit as far east as Pearl Harbor. Just because we got caught with our pants down doesn’t mean we were stupid.

Preparations had been underway to bolster our air forces in places further west like Wake Island and Midway. Two of our seven combat-ready carriers, Enterprise and Lexington, were on missions to ferry fighters to those two islands during the attack.

Saratoga had just completed refits at Puget Sound in Washington State and was embarking her aircraft in San Diego on December 7.

Our other three carriers — Ranger, Wasp, and Yorktown — were half a world away in the Atlantic. (The Hornet had just been commissioned but hadn’t completed her shakedowns.)

Our carriers were spread out everywhere. Our Pacific Fleet battleships were all lined up neatly on Battleship Row, ready to be sunk.

The brown shoes were the naval aviators and their supporters, who believed that the aircraft carrier was the new dominant weapon of naval combat. The black shoes still believed in the big guns — lines of battleships duking it out the way God and Alfred Thayer Mahan intended.

The black shoes were dominant. The brown shoes were the annoying Young Turks doomed to slower promotions and far less influence over Navy doctrine.

We “knew” Japan would surprise attack Pearl Harbor. We believed the battleship was our primary weapon. And yet FDR — a Navy man from way back — just left them as sitting ducks?

It’s true that FDR was itching for war, but the former Assistant Secretary of the Navy wouldn’t sacrifice his beloved battleship fleet and put the Pacific War effort at risk.

When you know the enemy is coming, you set up an ambush. That’s exactly what Admiral Chester Nimitz did at Midway just six months later, to roaring success. If a man as ego-driven as FDR could have claimed credit for an even bigger ambush to open “his” war, he would have taken it.

But I’m not here today to defend FDR or to start yet another internet flame war.

I want to honor those Americans who fought at Pearl Harbor, and especially those who gave that last full measure of devotion. So from this Pearl Harbor Remembrance Day on, let’s set aside the theories and revel in the fact that such men fought so bravely against such impossible odds.