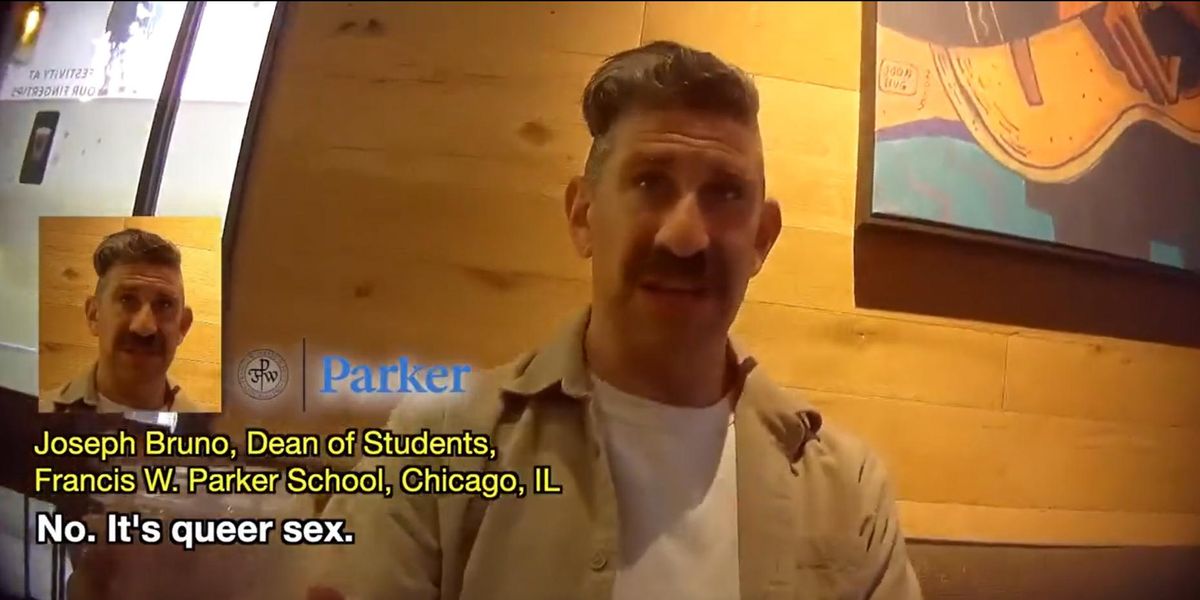 A high-ranking official at an elite school that serves kids from pre-K through twelfth grade bragged to an undercover reporter that he has gone far beyond bringing drag queens into the classroom.

Project Veritas released a video of Bruno’s remarks on Wednesday.

Since the release of the video, the school, facing significant backlash, has deleted its Twitter and Facebook accounts. The school has also accused Project Veritas of editing the video “with malicious intent.”

Francis W. Parker School purportedly guides students “in their learning and development so they can become authentic, effective, responsible and empathic citizens and leaders in our democracy and the wider world.”

To this end, the school’s faculty “is committed to healthy identity formation and intellectual development within each learner at Parker.”

Last week at a National Association of Independent Schools People of Color conference, the school’s dean of students unwittingly spoke with an undercover Project Veritas reporter on hidden camera, detailing some of the initiatives that have been undertaken in the classroom to aid in such “identity formation.”

Bruno indicated that the kids were “just playing with” and “looking at” the sex toys that had been distributed in the classroom “while I’m sitting there.”

According to Bruno, some kids asked, “How does this butt plug work? How do we do, like, how does this work?”

Bruno intimated that “a really, like, cool part of my job is I don’t have to worry” about potential resistance to prompting and answering such questions and to giving kids lessons on “queer sex.”

Having apparently faced little to no opposition from the board of trustees, the administration, or parents, Bruno said he enjoyed “so much freedom. So much money to do stuff.”

The dean of students said the school also “had a drag queen come in, pass out cookies and brownies and do photos” with students ages 14 to 18.

Alex Bevels, the “non-binary” man dressed as a woman who was brought into the classroom, “hung out” in Bruno’s classroom and office.

School doubles down amid backlash

Facing outrage over the Project Veritas video, the school’s principal, Dan Frank, issued a release saying, “We are heartbroken to learn that one of our colleague’s words have been severely misrepresented for a malicious purpose.”

Project Veritas founder James O’Keefe responded by suggesting there were no content edits.

u201cUPDATE: @fwparker just sent an email attacking Project Veritas & defending the schools “comprehensive approach to sex education”nn”Please know this video contains descriptive language. If you choose to view it, we ask you not to share it, because it will add to its viral power”u201d

Rather that condemn Bruno’s remarks or explain the alleged provision of sex toys to kids, the school stated that “administrators and Parker’s Board of Trustees support Parker’s programming, the strength and inclusivity of our curriculum, and the dedicated faculty and staff that teach it.”

Frank said he was “sickened,” not by potential sexualization of minors, but by Project Veritas’ “deceptive tactics … and their attack on the LGBTQ+ community.”