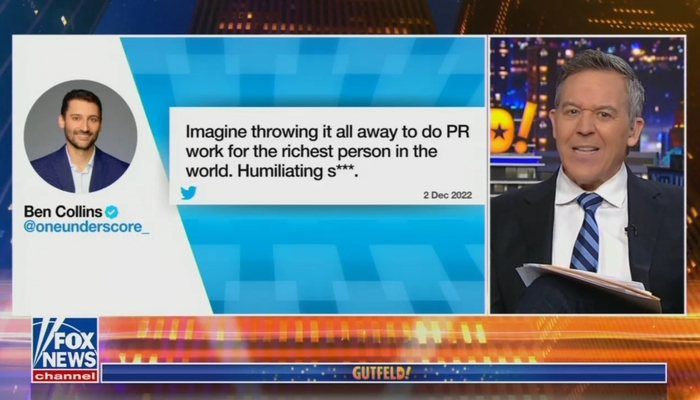 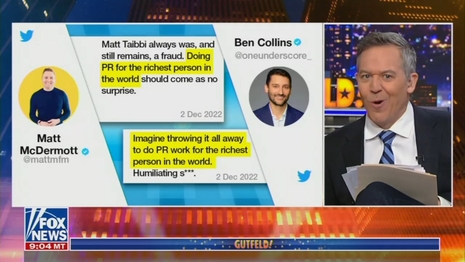 NBC News “misinformation” reporter Ben Collins is emerging as the biggest leftist propagandist on the Elon Musk takeover of Twitter. Fox News media reporters Brian Flood and David Rutz reported Collins “has repeatedly and openly criticized Elon Musk and his handling of Twitter, raising questions into whether he can report impartially on the topic.”

Collins hasn’t been attempting impartiality in any way.

When journalist Matt Taibbi wrote a Twitter thread Friday about Musk releasing the “Twitter Files,” Collins mocked him for the “humiliating s—t” of doing “PR work for the richest person in the world.” Collins was one of many leftists using that “PR work for the richest person” spin line, so Collins is part of some JournoList-style hive mind effort.

“Elon Musk paid $44 billion to discover what we already knew: content moderation is messy and involves whole teams of people with a range of viewpoints trying to appease different political factions,” Collins wrote in one tweet.

Another declared, “What Elon Musk’s Twitter files have revealed so far is that content moderation at Twitter WAS being decided by a team of people with differing viewpoints. Now it’s being decided by the richest man on Earth with an axe to grind against one political party — a true scandal.”

Where do they get this bizarre point that Twitter’s aggressive throttling of the Hunter Biden scoops somehow reflects a “range” of differing viewpoints? If there was an actual difference of opinion, the throttling should have been much less aggressive.

It didn’t seem to matter to NBC News that Collins inaccurately predicted that Musk’s Twitter would ruin Election Day.

Meanwhile, *his* prediction before the midterms was
a Twitter implosion “could make getting reliable information on this site during Tuesday’s elections impossible.” Completely wrong, Twitter had a smooth night on 11/8.https://t.co/6Tu5Oqhc2f

Collins is even trolling Musk directly with cartoons mocking him as smug (talk about the pot calling the kettle black):

Beverly Hallberg told Fox: “Ben Collins is supposed to be reporting the news, yet he’s giving clear opinion and attacking actual journalism in the process. It’s quite something that he’s been so bold in showing his true colors, and it points to how siloed the media elite are since they don’t even realize their own bias.”