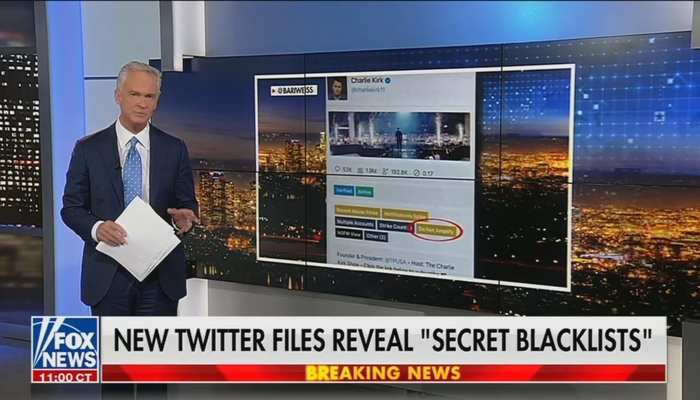 On Thursday night, journalist Bari Weiss released the second batch of the Twitter Files that showed unequivocally that Twitter has not only blacklisted conservative and opposing views, but lied repeatedly to the world about shadowbanning. Not surprisingly, the major broadcast networks ABC, CBS, and NBC censored this story from their flagship Friday morning shows and continued to purposefully live in denial.

In turn, the tally for network coverage of the Twitter files remained at 26 seconds courtesy of Monday’s CBS Mornings regarding first Twitter Files, which were released December 2 by Matt Taibbi.

The Fox News Channel’s Fox News @ Night provided an alternative approach by spending eight minutes and 53 seconds on Weiss’s reporting. Host Trace Gallagher shared in a tease on how they revealed “not only were conservative accounts blacklisted, but the highest levels of the company were involved in the censorship.”

Correspondent Matt Finn led off the show with the details, reporting that Weiss’s findings “seem to confirm a lot of the allegations that Twitter was secretly silencing and blacklisting users including very prominent conservative voices.”

Quoting Weiss, he said our friend, conservative talk radio and podcast host Dan Bongino was hit with a “search blacklist” classification AND Turning Point USA head Charlie Kirk was slapped with a “do not amplify” tag.

Finn continued with Weiss’s bombshell that, in his words, “the secret censorship went beyond just ticketing those accounts” to “a secret group called the site integrity policy, policy escalation support” that “included Head of Legal Vijaya Gadde, Head of Trust Yoel Roth, and CEOs Jack Dorsey and Parag Agrawal.”

Said group was involved with the repeated suspensions of the indefatigable LibsOfTikTok, who was given “Trends Blacklist,” “Recent Abuse Strike,” and “NSFW View” tags with a special note to “not take action on user without consulting with” this cabal.

Noting that “Twitter previously denied all of these practices in 2018,” Finn closed with the fact-check of Gadde as she said “we do not shadow ban, and we certainly don’t shadow banned based on political viewpoints or ideology.”

Along with former Trump official Fred Fleitz sharing later that “it is so gratifying to see” what’s actually been going on, FNC even presented the other side with liberal Fox News contributor Leslie Marshall dismissing the findings because “Twitter is a private company” and thus had “every right to censor” since “a lot of the information” can “lead to either violence or conspiracy theories.”

Later in the show, Gallagher touched on frequent Fox guest and Stanford Dr. Jay Bhattacharya being secretly tagged on a “trends blacklist” to keep a lid on his posts due to his views about COVID-19 that ran contrary to the likes of Dr. Tony Fauci.

Along with a clip of Bhattacharya reacting on The Ingraham Angle, he went to Dr. Houman Hemmati on the fact that this flew in the face of scientific debate (click “expand”):

BHATTACHARYA [on FNC’s The Ingraham Angle, 12/09/22]: This was not a free and fair kind of discussion. It wasn’t science that happened. When we followed the science, it was not actually science that we followed, it was something else entirely. It was censorship. [SCREEN WIPE] It’s also telling, Laura, instead of arguing over facts, they use these techniques because they knew their arguments were not strong enough to survive the light of day.

GALLAGHER: Part of the so-called Twitter Files: Part Two revealed the censorship of Dr. Jay Bhattacharya, one of the authors of “The Great Barrington Declaration” which argued that COVID lockdowns would harm children. Turns out Dr. Bhattacharya was also on the Twitter blacklist.

HEMMATI: [W]hen you think about it, Elon Musk tonight described what Twitter was doing a censorship of the right. Dr. Jay Bhattacharya did not come into this from a political angle. He wasn’t left right or center…[T]hey didn’t just shut down people who had any particular political opinions, they shut down people who they knew were either questioning the narrative that they were providing, that we need to lock everybody down, close schools, force masks, et cetera, and they were shutting down anyone who even dared to question this. Let alone propose an alternative, which, which Jay did and he said: you know what, let’s focus our protection on the elderly…[T]hey tr[ied] to prevent that from happening, why? How many people were harmed because of this?

GALLAGHER: He made a very good point when he was talking to Laura Ingraham, Ingraham, he said, you know, the concept here is — is that science is about robust debate. And the fact that he’s not a conservative, he’s just a doctor, trying to say this is what I think is the best way to go about this, and he was shut down because he went against the narrative. That’s not what science is about. You’re supposed to challenge the scientific narrative.

HEMMATI: Anytime. I’m a research scientist, as you said. Anytime I submit a research publication, what happens? There’s intense debate, there are multiple reviewers, they’re either going to agree with each other, they may disagree with each other, they come back to us and they say, you’re going to have to revise your paper, we think these things are wrong, or why don’t you do additional experiments. And then even after it’s published, what happens? People continue to debate it…That’s the way science has always happened…I think there has to be accountability at this point. You can’t let this continue.

Instead of covering this story that should concern all Americans and especially on the issue of their First Amendment rights (with significant possible legal consequences for Twitter), ABC’s Good Morning America, CBS Mornings, and NBC’s Today spent a combined six minutes and 44 seconds fawning over Trevor Noah following his final episode as host of Comedy Central’s The Daily Show (which our Alex Christy took a look back on here).

This bias by omission was brought to you by advertisers such as Capital One (on CBS), Honda (on NBC), and Nature’s Bounty (on ABC). Follow the links to see their contact information at the MRC’s Conservative Fight Back page.