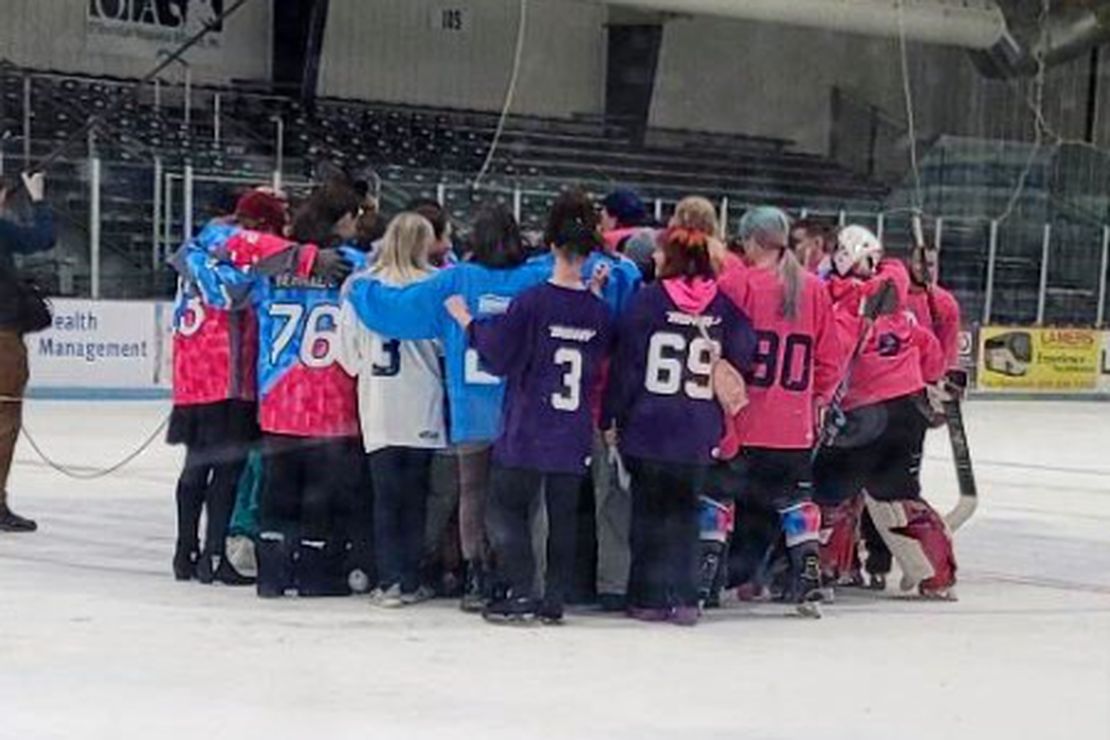 During Thanksgiving week, 80 hockey players — all transgender or “non-binary” — took part in a draft hockey tournament in Wisconsin. A “draft tournament is conducted differently from a regular tournament where players belonging to schools, neighborhoods, cities, or regions compete as collective units.

In a “draft tournament,” players register individually and get assigned to tournament teams through some formal, informal, or even random process. In the trans tournament, it’s unclear what process was used to choose the players. As it happened, the 80 players were divided into six teams: Black, White, Purple, Blue, Yellow, and Pink.

It’s hard to tell from this photo, but this is nearly eighty trans folks holding each other in our grief and in our joy. pic.twitter.com/2raxvlbnkK

According to Quillette’s Jonathan Kay, the Pink team ended up with many of the biological men. By not an amazing coincidence, the Pinks went on to blow away the competition and win the tournament.

Kay — the only reporter to write about the tournament in-depth — relates a couple of incidents that help explain why the transgender community, and the NHL, which boosted the tournament, have largely kept their mouths shut about it.

“There [was] just an enormous difference in size between the two teams—height, weight, shoulder width, muscles—the differences were plain to even a child,” is how one rink-side observer described the finals to me. On video, a quartet of large Team Pink players stood out: #1, #9, #42, and #90. Each of these she/her biological men—at least one of whom played Division I college hockey on a men’s team before transitioning—appeared head and shoulders taller than most of Team Black (whose 12-player roster contained only two she/hers). And this group didn’t even include #29, a speedy Team Pink she/her, and self-described male-to-female trans woman, who consistently skated circles around the opposition, and who ended up netting two hat tricks in the space of four games during the tournament.

Research has shown that women players have “significantly less isometric strength (49%), neck girth (30%), and head mass (43%), resulting in lower levels of head-neck segment stiffness (29%).” This is an open invitation to a concussion. And that’s exactly what happened.

A female-to-male player on the Black team was pushed to the ice by a much larger Pink player. She was carried off on a stretcher.

“Get a stretcher! Get a medic!”

Words heard at the first NHL All-Trans Draft Tournament after a male player casually bumps into a female player. The contact doesn’t look serious on video. But the size diff between players is so great that the female suffers a concussion. 🧵 pic.twitter.com/U4y0huo0oA

Then, with about 10 minutes left in the second period, that same Pink player who sent the Black player into the boards scored a goal. This was apparently too much for the Black goalie, Mason LeFebvre.

Something about the moment pushed LeFebvre over the edge, causing the goalie to literally collapse in a corner of the rink, whereupon several team members skated over to offer words of consolation.

LeFebvre was eventually coaxed out of the corner, though not before a rink-side supporter enlisted the crowd in a chant of “We Love Mason.” At this point, the coach of another tournament team—Team Yellow—walked to centre ice and held a sort of pep talk, consisting of slogans such as “We’re not defeatist,” “We’re not done yet,” and “The score doesn’t determine your value.” The game then continued, following what had been a seven-minute delay, with Team Black swapping out LeFebvre for another goalie (who let in three more Team Pink goals—a second from #90, and a pair from #29).

I don’t believe I’ve ever seen a hockey player — pro or amateur — become unraveled by a goal.

In fact, the entire game was surreal. Players on Team Pink were instructed not to run up the score on Team Black. Some Team Pink players deliberately stopped playing hard. In short, it wasn’t recognized as hockey by anyone except rabid transgender activists.

Vice News covered the tournament but has neglected to post any video or report on the tournament. After tweeting proudly about their support, the NHL has maintained radio silence.

The NHL is proud to support this past weekend’s Team Trans Draft Tournament in Middleton, Wisconsin. This was the first tournament comprised entirely of transgender and nonbinary players, with around 80 folks participating! #HockeyIsForEveryone #NHLPride pic.twitter.com/OfEoAVXtH5

When Canada’s national women’s hockey team tunes up for international tournaments by playing junior male teams composed of players aged 15 to 18, the women tend to lose badly. At the provincial level, Quebec’s women’s under-18 team was beaten 7-to-1 last year by a low-ranked Bantam AAA team made up of 13- and 14-year-old boys. Such lopsided contests regularly occur despite the fact that the male players aren’t allowed to throw a check, and are always instructed to calibrate their play style so as to avoid potentially catastrophic collisions.

What will it take for the transgender community to realize they’re playing with fire? Does someone have to die playing a silly game before the reality of physical, biological differences having nothing whatsoever to do with what gender you claim to be are recognized?

North Carolina Couple Arrested After Allegedly Performing Exorcism On Child Who Later Died
NBC Dishonestly Hypes Lawsuit Against DeSantis for Banning CRT
How Pence Having Classified Documents Makes Biden Look Worse
18-Year-Old Freshman Dies Suddenly After Collapsing During Workout
Man accused of posing as psychic so that he could repeatedly rape his daughter’s 11-year-old friend, collect nude pictures of her