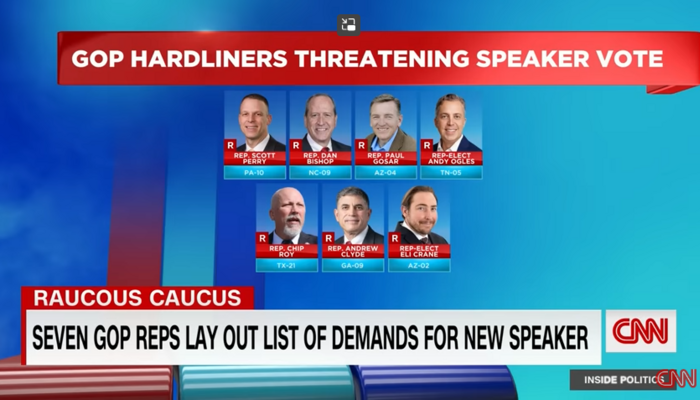 There was some good old-school New York Times labeling bias on Wednesday’s front page regarding California Rep. Kevin McCarthy’s fight to become House Speaker when the Republican Party takes over control of Congress next month: “McCarthy Fights to Clear Path to Speaker’s Seat.” The front-page text box set the hostile labeling tone: “Trump’s Lobbying Has Not Moved Critics on the Far Right.”

The far left of the Democratic Party, including Rep. Ilhan Omar, Rep. Maxine Waters and the like, rarely if ever get this treatment. Reporters Catie Edmondson, Maggie Haberman, and Annie Karni teamed up on this festival of hostile ideological labeling of the GOP.

Former President Donald J. Trump has been working the phones, personally pitching right-wing lawmakers on voting to make Representative Kevin McCarthy, the Republican leader he has called “My Kevin,” the speaker of the House.

Representative Marjorie Taylor Greene of Georgia, the most outspoken far-right member of his conference, is publicly vouching for Mr. McCarthy. The California Republican has made private entreaties and public promises to win over his critics, including floating the impeachment of a member of President Biden’s cabinet.

Mr. McCarthy has embarked on the kind of grueling campaign that lawmakers in both parties jockeying for the post have sometimes been forced to perform. But some of the hard-right lawmakers with whom he is attempting to bargain do not appear to have a price, and most care less about legislating than shrinking the federal government — or upending it completely.

The reporters were awfully cavalier about repeating hyperbole about far-right “terrorism.”

John Boehner, the Ohio Republican who was run out of the speaker post by the far right, famously described the approach of this faction as “legislative terrorism.” And with a razor-thin majority that only allows him to lose a few votes in the election for speaker, it could be a recipe for disaster for Mr. McCarthy.

Even Mr. Trump, perhaps the most influential voice in the hard-right faction of the party, has had little success to date in moving lawmakers over to Mr. McCarthy’s side….

The reporters threw a new insult into the mix: “Ultraconservative.”

He has threatened to investigate the House select committee investigating the Jan. 6, 2021, attack at the Capitol, promising to hold public hearings scrutinizing the security breakdowns that occurred. He has been quietly meeting with ultraconservative lawmakers in an effort to win them over. And on Monday night, he publicly encouraged his members to vote against the lame-duck spending bill to fund the government.

Those entreaties have fallen flat for some of the ultraconservative members of his conference.

By the way, a quick-and-dirty nytimes.com search turned up 2199 uses of the term “ultraconservative” in the paper’s archives, compared to 262 for the comparative term “ultraliberal,” a ratio of 8.4 to 1.