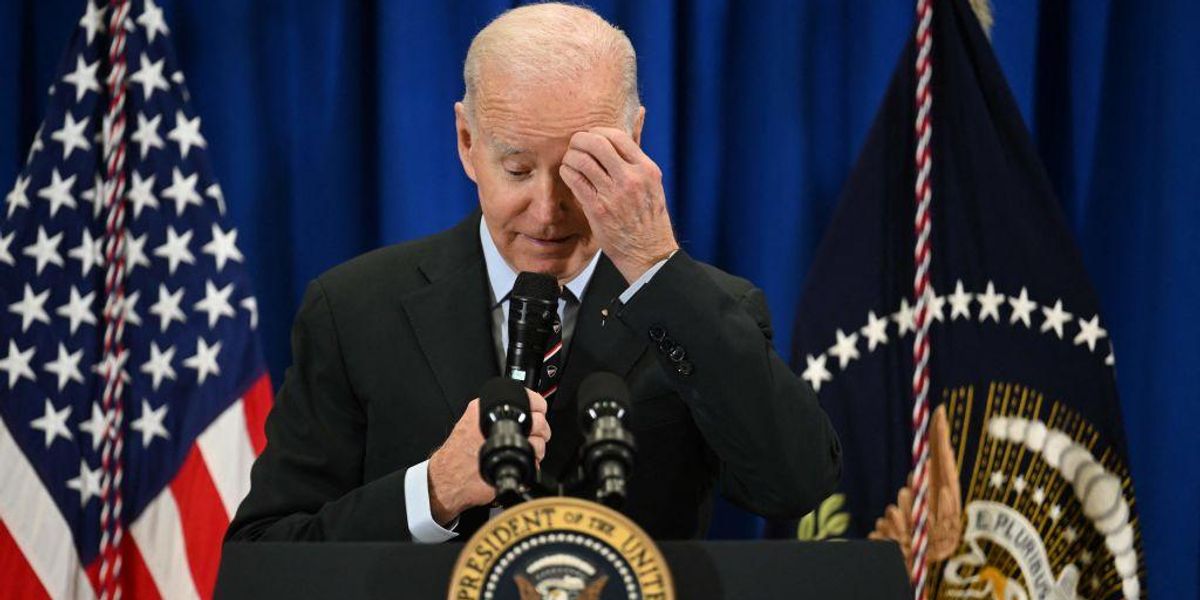 The latest gaffe-filled speech from President Joe Biden featured him confusing his wife’s father for her grandfather, making an implausible claim of how his uncle was awarded the Purple Heart, and greatly exaggerating how many trips he made to Iraq and Afghanistan. President Biden also struck a nerve in the same speech when he denigrated Irish people.

Biden delivered a speech to U.S. veterans during a town hall event on Friday in New Castle, Delaware.

Then Biden inexplicably and incorrectly delved into his family’s heritage.

The 80-year-old Biden told Firmani, “Thank you. I may be Irish, but I’m not stupid.”

President Biden continued, “I married Dominic Giacoppa’s daughter. So, you know, I got a little Italian in me now, you know?”

However, Jill Biden’s father is Donald Carl Jacobs from Hammonton, New Jersey. Jill’s grandfather is Domenic Giacoppo – who is a second-generation immigrant from Italy.

Jill’s mother is Bonny Jean Godfrey, who is of English and Scottish descent. Jill’s grandmother Mabel Sarah Blazer is of German descent.

Washington Examiner investigative reporter Jerry Dunleavy explained, “Biden loves this Bidenism (he’s said it in the past before) — just casual old school anti-Irish stereotyping, but he thinks it’s a fun part of his gift of the gab because he considers himself Irish (his great-great-great grandfather moved to America from Ireland in the 1800s.).”

Businessman Eoghan McCabe tweeted, “Irishman here. I feel neutral because I think he actually is stupid.”

Biden made the exact same disparagement about the Irish as well as confusing Jill Biden’s grandfather and father on St. Patrick’s Day in March.

Also during Friday’s speech, Biden made a gaffe or outright lied about how his uncle received the prestigious Purple Heart award.

So we got him the Purple Heart. He had won it in the Battle of the Bulge. And I remember he came over to the house, and I came out, and he said, “Present it to him, okay?” We had the family there.

The New York Post reported, “Frank Biden’s tombstone does not identify him as a Purple Heart honoree, nor does his obituary. A partial registry of known Purple Heart recipients also doesn’t note anyone by that name receiving the award, though that database is not comprehensive.”

Forbes reported, “There doesn’t appear to be any record of Biden giving his uncle the honor—the president hasn’t mentioned the story in the past, there have been no news articles written about it and Frank Biden’s name does not appear on a list of recipients held by the National Purple Heart Hall of Honor, though the list is incomplete.”

u201cJoe Biden says after he was elected VP, he awarded his Uncle Frank with a Purple Heart he earned at the Battle of the Bulge.nnThere is no evidence any of that is true u2014 and Biden’s uncle died in 1999, while Biden wasn’t elected VP until 2008.u201d

Biden also greatly exaggerated how many times he has visited Iraq and Afghanistan.

Biden claimed, “And, you know, I think that there’s a — I’ve been in and out — not as a, obviously, combatant — but in and out of Afghanistan and Iraq and these areas 38, 39 times as — not as President, only twice as President, but from the time I was a senator, but particularly when I was Vice President.”

Biden exaggerated his number of visits to the Middle Eastern countries back in 2019, and at the time the Biden campaign admitted that the correct number of trips is 21.

‘I am grateful Elon Musk reached out to me’: GOP senator’s Twitter account unlocked after being slapped down over hunting photo
Video: US fighter jet shoots down purported Chinese spy balloon after FAA shuts down 3 airports on East Coast
Electric vehicles are a SCAM â€“ here’s why
Teen girl killed in suspected shark attack while swimming with dolphins
Anti-Semitic MSNBC Claims Israel Turned West Bank Into An Apartheid