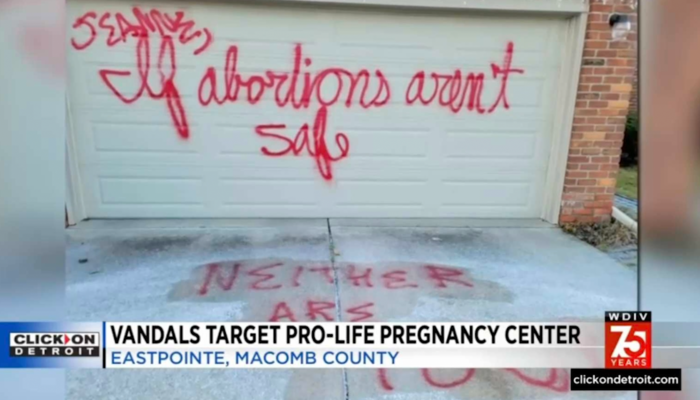 My New Year’s Resolution, or at least my New Year’s prayer, is that I don’t have to hear about any more pro-lifers or pregnancy centers getting attacked.

On December 17 a pregnancy center in EastPointe, Michigan was vandalized along with the home of a board member for the center. Vandals spray painted both buildings. It will be interesting to see whether local authorities do much about it. Official responses to these attacks across the country have been perfunctory at best.

Pregnancy Aid had the words “LIARS,” “FAKE CLINIC,” and “Jane’s Revenge” spray-painted in red on the side of the building but otherwise there was no structural damage.

It’s likely that vandals called Pregnancy Aid a fake clinic as well as liars because the left tends to think that any establishment that helps pregnant people but doesn’t kill babies is somehow lying. Pregnancy Aid provides free ultrasounds and pregnancy tests as well as formula and clothing. The center is a GOOD thing and seeks to help women and children.

Even still, pregnancy centers have been under extreme threat with the temper tantrums that pro-aborts have been throwing across the nation. But, those are out in the public, the vandalism at a home personalizes the attack.

Vandals went to the home of a board member for the center spray-painting her garage door with the words “Jeanne, if abortions aren’t safe…” and then to her driveway, “Neither are you.” The vandals also spray-painted her front door camera and broke a window.

“I’m not sure what their end game is, what their goal is, other than to hate,” Pregnancy Aid’s executive director Nancy Anter said. The Detroit News also mentioned more of Anter’s conclusion, “Anter said she was especially disturbed by the personal nature of the attack on a person’s home. It showed that the vandals had researched the organization to learn who was affiliated with it.”

Again, the clinic that the board member serves simply looks to help people. It doesn’t provide abortions because abortions hurt women and children and are not the solution to a problem. Pregnancy Aid and other pregnancy centers that have similar policies believe that sentiment and therefore choose to actually help rather than hurt. Nonetheless, those places are the places getting attacked and though local police may investigate, the FBI is simply turning a blind eye to them.

As a matter of fact FBI Director Christopher Wray admitted that 70% of post-Roe violence has been directed at pro-life groups and churches yet the FBI refuses to admit whether or not they’ve made any arrests on these violent antagonists.

You Won’t Believe Who Google Laid Off (Or Maybe You Totally Will)
Fact Checkers POUNCE: ‘The US Still Exists,’ Biden Didn’t End Us as a Nation!
Lawsuit: Did the US Postal Service Share Private Customer Information With Unions?
CBS deletes ‘We are ready to worship!’ tweet that it had posted ahead of Sam Smith’s ‘Unholy’ Grammy performance
282 reported sexual assaults closed without disciplinary action at public university