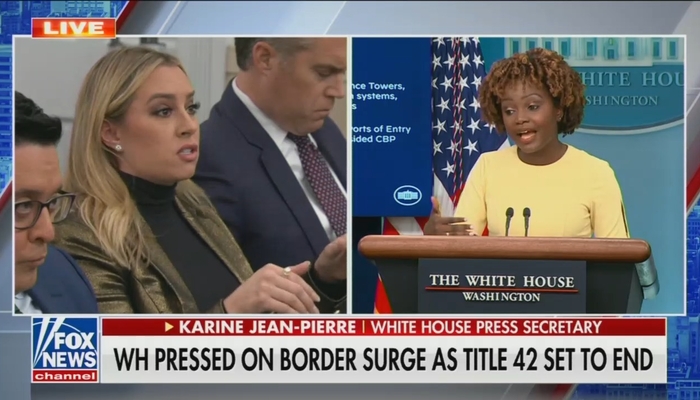 The ladies representing Fox News brought the heat, however, with Jacqui Heinrich drawing her ire on the border and Hillary Vaughn having Jean-Pierre dodge a question about the truly bombshell findings of Twitter Files part seven.

Amid all the border questions, Vaughn’s Twitter files question was whether the administration is concerned the intelligence community squashed “a legitimate news story”:

VAUGHN: The latest Twitter Files show that the intelligence community was actively involved in discrediting the Hunter Biden laptop story. Does it bother the President & those at the White House that a govt agency like the FBI was involved in suppressing a legitimate news story?

JEAN-PIERRE: Again, I’m just going to refer you to the FBI. I’m not going to comment from here about that.

On the border, AP’s Darlene Superville simply wondered whether the administration was hoping “the court will intervene and extend Title 42 to help you all out of this situation that is brewing at the border.”

Jean-Pierre replied with laborious generalities about the Department of Homeland Security “surging resources to the border” while at the same time asking Congress for money to have “a safe, orderly, and humane” immigration system before accusing Republicans of not being “serious about securing the border.”

After ABC’s Karen Travers invited her to “walk us through what the plan is to help” El Paso, Texas, Travers had a hardball Jean-Pierre wanted nothing to do with:

You mentioned surging resources. I had asked you in September specifically about El Paso and you had said the time that DHS, the administration was surging resources to the region looking quickly to working to quickly decompress the area. Has that surge of resources been maintained for the last several months? And is this — is that sustainable? You know, now you’re talking about another surge of resources, you know, is that on top of what had already been done in September? And — and how long can you keep doing this surge like that?

Reuters’s Steve Holland went next and had Jean-Pierre ducking this solid question so as not to engage in “rumors”: “Karine, is the Biden administration looking at sending migrants to Mexico via the expedited removal process if Title 42 ends?”

Holland even tried to ask if “estimates of 50,000 migrants” waiting to storm the border when Title 42 was accurate, but Jean-Pierre said she didn’t “have a number for you” and instead didn’t want to “spread misinformation” to help smugglers.

A little later, CBS’s Ed O’Keefe pressed on what the administration would do if they received the $3.2 billion funding request and then grilled her on the reality that the last two years “resulted in virtually no change in immigration policy with Democrats in charge.” Jean-Pierre’s answers included the hilarious claim that the border is not open (click “expand”):

O’KEEFE: You’re asking for $3.2 billion roughly from Congress to help pay for all these new or ongoing plans across the border. Let’s say that money comes in the omnibus this week. What’s the plan after that to work with Congress to address this issue?

JEAN-PIERRE: Look, I mean, Ed, we have, from day one, have asked Congress to help us asked this issue, right, by putting forward the immigration reform bill. That’s on day one that the President had requested that had asked that. That’s to deal with modernizing the immigration — this broken immigration system that we currently have and also to really protect a DACA recipients and do so much more. And so we have, we have reached out. We’ve done outreach to Congress. We have asked them and by — by acting, again putting forth this — this — this piece of legislation.

O’KEEFE: It’s resulted in virtually no change in immigration policy with —

O’KEEFE: — when Republicans are in charge?

JEAN-PIERRE: — look, again, we are — we’ve asked for the 3.5 billion. We’re going to continue to ask Congress to assist in helping with — especially congressional Republicans to help us with what’s going help us border if they are indeed serious about doing that. But look, even with that — without their assistant — without many Republicans being involved here, congressional Republicans, we have secured more resources for the border then any president before that — who preceded him, who preceded, this current President. He has most agents ever [sic]. As I said, the 23,000 agents and let’s not forget he’s taking historic action to seize record levels of fentanyl from entering our country and taking thousands of smugglers off the streets and that’s without congressional — many congressional Republicans assisting here, so the President has made this a priority. Now, as we’re — as Title 42 is going to be lifted on Wednesday because — due to a court order, we have put forth a 3.5 billion funding requests from Congress. If they are serious about this — if congressional Republicans are serious about this. They would take the take this up instead of doing political stunts.

O’KEEFE: This is going to be big news and is big news across the Northern Hemisphere because migrants aren’t just coming from the northern triangle anymore. They’re coming from Chile, from Peru, from Ecuador, whose president is here today. Venezuela, Colombia, of course. What is the White House’s message to somebody who may see this somewhere in the Western Hemisphere and think, after Wednesday, it’s going to be easier to get into the United States.

O’KEEFE: But again, in plain English to migrants who might be thinking about it, what should they do after Wednesday?

JEAN-PIERRE: I — I just laid that really clear. It would be wrong to think that the border is open. It is not open and I just wanted to be very, very clear about that.

Even The Washington Post got in on the action with Tyler Pager drawing a rhetorical shrug when he wondered what Vice President Kamala Harris has been up to seeing as how she was “tasked…with studying and working on the root causes.”

A few moments after Jean-Pierre swatted down a reporter’s queries about whether Biden would visit the border, Heinrich started with a simple request for reaction to “El Paso’s Democratic mayor…declar[ing] a state of emergency” because “he felt he could no longer keep his community or the asylum seekers safe.”

Jean-Pierre insisted that “Biden has taken steps to reduce disorderly migration while expanding legal pathways for orderly migration” since being inaugurated, but Heinrich wasn’t having it and noted border facilities are well beyond capacity with one being stretched by a factor of four.

Additionally, Heinrich called out concerns that the funding request would be “throw[ing] money at a problem” and that Biden could simply extend Title 42. When Jean-Pierre said they’re forced to end it by a federal judge, Heinrich called her out by arguing the push to end Title 42 was “started by you guys” (click “expand”):

HEINRICH: A little bit to Ed’s question, though. You know, this push from the podium to get Republicans to send more resources to the border. A lot of them say that, you know, they hesitate to throw more money at a problem, the Homeland Security Secretary saying that the border’s secure and some people who would have to vote on that bill, also don’t have a lot of details on what’s in it and where that money goes, but that all that aside, you know, if you’re — if you’re saying that Republicans aren’t doing the work to get this done and then you have someone like Joe Manchin saying, well, the President has the ability to ask for an extension, he should be asking for an extension because we’re at this point where you’ve got a deadline and a crisis. Is that within the President’s authority to do that?

HEINRICH: Aren’t you guys driving it, though?

JEAN-PIERRE: That — that is a court order that is telling us to lift Title 42 and we’re going to comply because we follow the rule of law. That is —

HEINRICH: But the administration sought to lift it.

HEINRICH: — started by you guys.

JEAN-PIERRE: — what I’m saying is that —

JEAN-PIERRE: — what I’m saying — that — it is a court order that has been presented to us that we are going to comply with, so you’ve asked a couple of questions and I’m going to answer them if you give me a second….There is a way forward in getting the resources that the men and women of the Department of Homeland Security need to do the work at the border. And but what we have been hearing from Republicans and seeing from Republicans in Congress is political ploys. They’re not assisting. They’re not offering any assistance, many of them are not…The border is not open and so I want to be very clear about that because we were doing the smugglers job if we spread misinformation and — and so again just want to be very clear about that. And so, I’m going to move on.