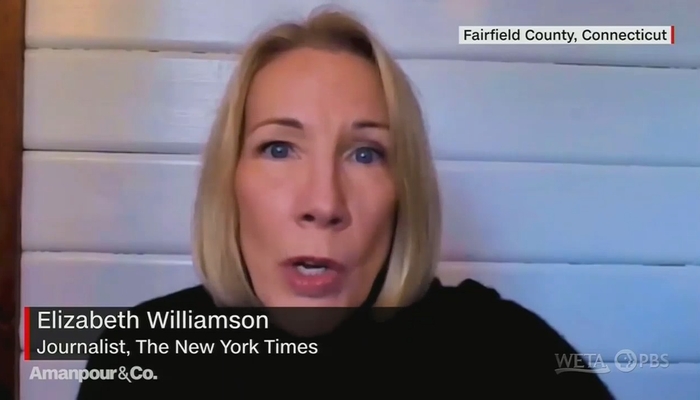 Elizabeth Williamson is a feature writer for The New York Times whose book Sandy Hook: An American Tragedy and the Battle for Truth came out in March.

Appearing as a guest on Thursday’s Amanpour & Co. on PBS, Williamson connected Sandy Hook deniers to “coronavirus myths” and January 6 and called for government to “tighten the cranks” on social-media giants to prevent “disinformation.” She claimed this was not a free-speech issue.

None of the misinformation and conspiracy theories promoted by liberals in recent decades was mentioned. PBS’s Hari Sreenivasan cued her up to call for regulations: “Do you think that there is any step that we can take? Is there a legislative solution? Is there something about holding social media companies responsible, doesn’t trample free speech?”

WILLIAMSON: If you look at the social media platforms, first of all, there’s a wide misconception that this is a freedom of speech issue when a lot of what happens here is happening on private platforms that are businesses. This is not government stifling one’s freedom of speech. This is a company saying, “By spreading falsehoods, or you are inciting violence through these falsehoods, you are violating our terms of service.”

That is not a violation of free speech principles, and companies have to be incentivized either through penalty or through some kind of positive measure to tighten the cranks on this kind of, you know, disinformation that’s spreading and causing these problems, you know, downstream problems, both in our democracy and in the violence that we’re seeing and the domestic terror plots that are based on these misconceptions.

So if a company is using disinformation or viral conspiracy memes to draw attention — and they’re pushing it out through their algorithms to people in order to keep them online — one of the models says that that should be held as a violation of section 230 or an outright violation that if you’re actively, as a company, as a very profitable, successful business using disinformation to draw in and reel in and keep people online, then you should be held liable for that content.

Williamson referred back to Infowars host Alex Jones infamously claiming that the Sandy Hook school shooting from 2012 was faked, and then linked to other activities pushed by parts of the right in years since:

WILLIAMSON: And so he gave voice to suspicions among misguided Americans that, you know, this was a so-called “false flag” operation, a government plot to institute draconian gun control measures. And (Alex) Jones on his show, within hours of the shooting, put that forward. I think both sides knew — of the gun debate rather — knew that this was going to be a watershed moment, but what people didn’t understand was that this was a watershed in the spread of false narratives in our society.

And this is something that we’ve seen happen repeatedly over the next 10 years since Sandy Hook. There was one father — Lennie Posner, whose son Noah Posner was the youngest Sandy Hook victim, who has a technology background, and he did understand that these falsehoods spinning on social media were the beginning of a trend, and we have seen that since. So we’ve gone from, you know, these false theories attaching themselves to Sandy Hook, then to most mass shootings, then Pizzagate, then Great Replacement Theory that led to the violence in Charlottesville, coronavirus myths, the 2020 election conspiracy that brought the rioters to the Capitol on January 6 of 2021. So it really was kind of the beginning of a powerful trend in our society.

So we’ve gone from, you know, these false theories attaching themselves to Sandy Hook, then to most mass shootings, then Pizzagate, then Great Replacement Theory that led to the violence in Charlottesville, coronavirus myths, the 2020 election conspiracy that brought the rioters to the Capitol on January 6 of 2021. So it really was kind of the beginning of a powerful trend in our society.

This segment was paid for in part by the Anderson Family Fund and by viewers like you. You can fight back by letting advertisers know how you feel about then sponsoring such content.