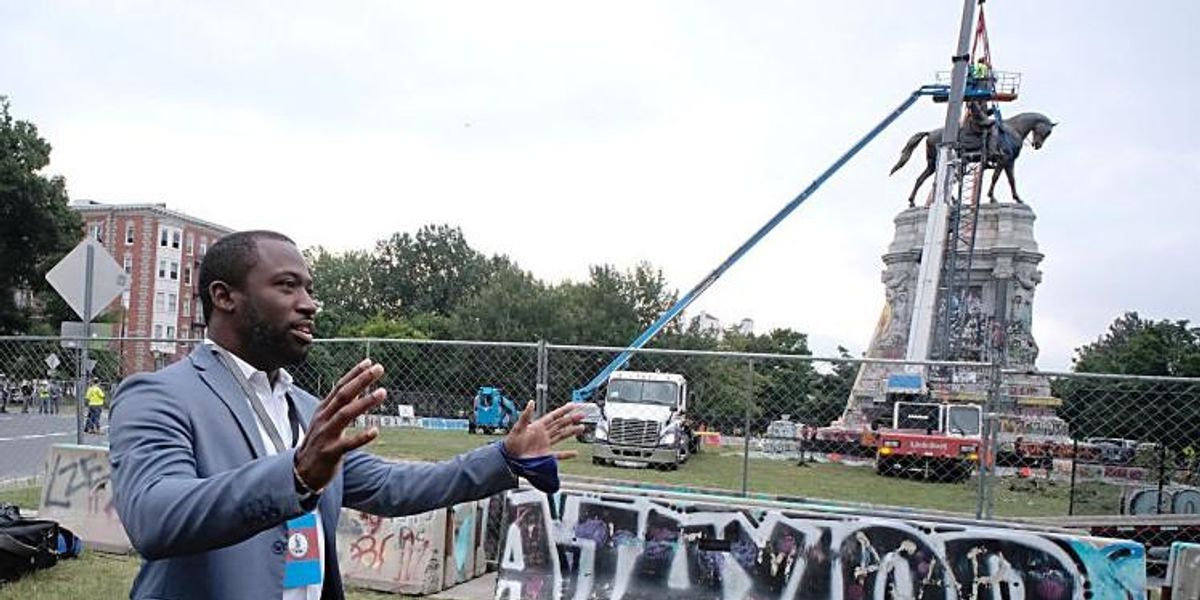 The far-left mayor of Richmond, Virginia, the former capital city of the Confederacy, ordered that the body of a Confederate general be disinterred and reburied in an effort to be “more inclusive.”

After years of legal wrangling, a Richmond Circuit Court judge finally authorized the removal of a Confederate monument erected to honor the memory of General Ambrose Powell “A.P.” Hill Jr. The monument had been sitting at the intersection of Laburnum and Hermitage, a high-traffic thoroughfare in Richmond, since 1891.

Richmond Mayor Levar Stoney, a Democrat who has stood in solidarity with Black Lives Matter in the past, ordered all Confederate statues removed in 2020 amid public unrest and rioting in the wake of the death of George Floyd. At the time, Stoney blamed white supremacists as the “leading force” behind many of the riots.

Until recently, Hill’s remained the last Confederate monument on public display in the city, but on December 12, it too was taken down. Removing the Hill monument was not as simple as removing other monuments, though, for one key reason: Hill’s remains had been buried under the monument. In order to remove the monument entirely, Hill’s body would have to be dug up and reburied elsewhere.

And that’s exactly what Mayor Stoney ordered crews to do. Hill’s indirect descendant, John Hill, objected vociferously to the removal of his ancestor’s body, but his objections were ignored. John Hill was on hand on December 12 as morticians from Bennett Funeral Home assisted in the removal.

A moment of silence marked the occasion when Hill’s remains were once again brought above ground. Hill was killed by a Union officer in Petersburg, Virginia, in 1865. The container for his remains had been covered in a simple quilt and Confederate flag, reports claim. He will be reburied about 80 miles north in Culpeper at a prearranged site, which the city of Richmond recently purchased for $1,000.

The moment of silence was eventually interrupted by a heckler, who taunted John Hill and threatened to “beat” him like his “daddy should’ve.”

u201cJohn Hill, descendant of AP Hill, is retrieving the remains. Now he is engaging with onlookers who have been arguing behind the caution tape. People on both sides of the controversy yelling at one another. @NBC12u201d

For his part, Stoney celebrated Hill’s removal, calling it a victory for inclusivity.

“Over two years ago, Richmond was home to more confederate statues than any city in the United States. Collectively, we have closed that chapter. We now continue the work of being a more inclusive and welcoming place where ALL belong,” Stoney tweeted.

u201cOver two years ago, Richmond was home to more confederate statues than any city in the United States. Collectively, we have closed that chapter. nnWe now continue the work of being a more inclusive and welcoming place where ALL belong.u201d

There’s no word on whether Stoney believes John Hill and members of the Sons of Confederate Veterans, some of whom attended Hill’s removal, belong in Richmond as well. Richmond officials claim that all the Confederate monuments that have been removed will be given to the Black History Museum & Cultural Center of Virginia.

Beschloss Beclowns Himself on MSNBC, Claims Biden Was ‘Mr. Smooth’
What The Media Won’t Tell You: The Squad, Race And Anti-Semitism
UN to push religious communities to ‘fully comply’ with human rights law to ’empower’ LGBT+ people
UKRAINE WAR: Here Comes the Russian Wave
The War Against Battle Re-Enactments Is a Blow to History and Tradition