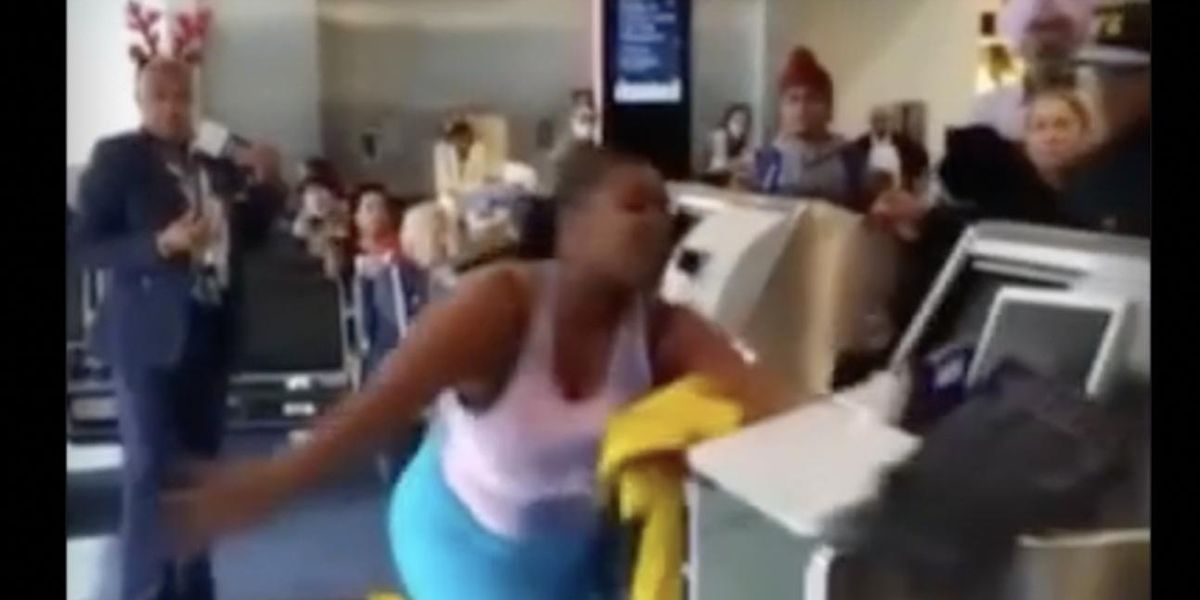 A passenger in Miami International Airport was caught on cellphone video Tuesday throwing a computer monitor at a gate agent, tossing equipment to the ground, and being arrested for aggravated battery, WSVN-TV reported.

The 25-year-old woman and her kids were flying from Alabama to New York City and had a layover in Miami, police told the station.

But at one point, she couldn’t find her two children, who had walked off to use the restroom, police added to WSNV.

“Once the subject noticed the children were not with her, she became irate and began to scream, demanding the gate agent to find her children,” police added in a statement to Fox News.

With that, the woman — who was at American Airlines Gate D-39 — tossed keyboards and ripped a boarding pass reader from a counter, the station said.

The gate agent in the background of the video screenshot below — wearing a headband with reindeer antlers — also felt the heat.

A different video camera angle shows the woman grabbing a computer monitor and throwing it at the gate agent and striking her in the shoulder, WSNV added.

“She went into a panic mode,” a witness told the station. “That’s what happened.”

A passenger reacting to the video told WSNV that “clearly she has anger issues” while another exclaimed, “Oh, my God! Why would she do that?”

Nearby officers with U.S. Customs and Border Protection held the woman until Miami-Dade police officers arrived, the station said.

The woman — identified as Camilia McMillie — was booked into jail later that night on charges that include aggravated battery, WSNV said, adding that she was being held on a $13,000 bond.

Police added to Fox News that the Florida Department of Children and Families is assisting McMillie’s children.

The American Airlines employee — presumably the antler-wearing worker hit by the flying computer monitor — was said to be OK with some bruising on her right shoulder area, the station said.

What did American Airlines have to say?

“Acts of violence against our team members are not tolerated by American Airlines, and we are working closely with law enforcement in their investigation,” AA spokesperson Derek Walls told WSNV.

The station added that throughout the pandemic, “violent encounters on planes and at the airport have soared.”

Readers of TheBlaze may recall almost exactly one year ago when a brawl erupted inside Miami International Airport, culminating in a police officer pulling his gun on an advancing mob — one member of which, angry over a delayed flight, fought and even bit the officer on the head.

NHL team skips ‘Pride Night’ warmup jerseys: ‘We support everyone’s individual right to respectfully express their beliefs’
Damar Hamlin speaks publicly for first time since on-field collapse: ‘With God’s guidance, I will continue to do wonderful and great things’
Leftist Privilege Gets Lawyer-Turned-Firebomber Off Easy
Tom Brady, 45, says he’s retiring ‘for good’ from NFL: ‘Thank you guys for allowing me to live my absolute dream.’
Report: Nikki Haley to Announce for President February 15