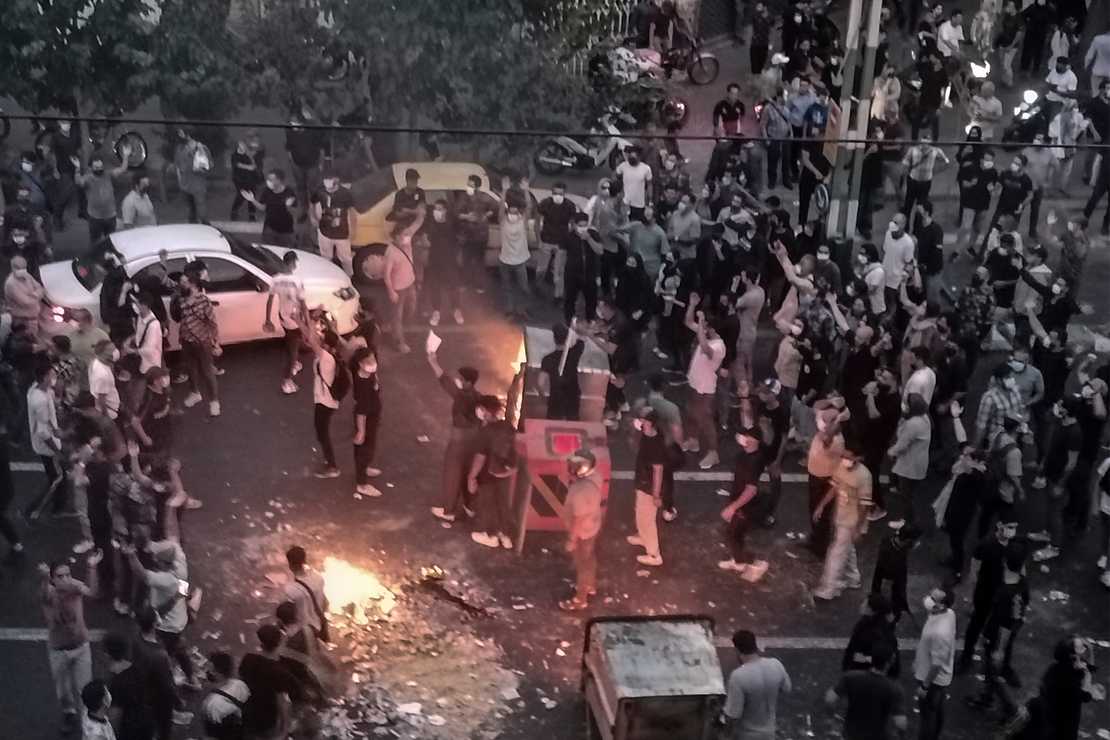 The clerical fascist regime in Iran has been under siege since September, when massive protests erupted following the death of a young Kurdish woman, Mahsa Amini, in the custody of the Morality Police.

Only a massive police presence has deterred protesters in the larger cities. But even there, small groups will gather for a few minutes chanting “Death to Khamenei!” giving hope to the long-suffering population.

People have been finding unique ways to protest. There has been the sometimes hilarious “turban tossing,” where Iranian youths sneak up behind a turbaned cleric and knock it off his head.

The sport became so popular that clerics took to tying fabric around their turbans to prevent it.

The new life of the Mullahs in Iran. Since Turban tossing has become a trend in Iran towards corrupt Mullahs, they are now required to add some additional protection 😂😂. #MahsaAmini #مهسا_امینی #KianPirfalak pic.twitter.com/6rjoBsNd4w

This young man was immediately arrested after performing a dance in front of the Azadi (freedom) Tower.

No amount of bullying or beating by the police has been able to stop the protests, which have now entered their third month.

Now, a new phase of the protests has begun. Unable to squash the demonstrations with brutality on the streets, authorities have begun to execute protesters for “waging war against God,” which in Iran is a capital offense.

The executions so far haven’t dimmed the ardor of those participating in the revolution.

On Dec. 8, Mohsen Shekari, 23, was the first to be put to death. He was hanged after taking part in protests in Tehran. Four days later, Majid-Reza Rahnavard, also 23, was executed publicly — his body was hanged from a crane in the northeastern city of Mashhad. Like Shekari, he was convicted of “waging war against God,” a capital offense.

The executions are Tehran’s main response to protests that swept the country since Amini’s death, and they signal that Iran’s clerical leadership feels it has few options other than brute force to quell the unrest.

Majid-Reza Rahnavard was a well-known wrestling champion and was apparently tortured into confessing.

This morning, the Islamic Republic executed a wrestling champion. #MajidrezaRahnavard was arrested and sentenced to death during protests in Iran.#NavidAfkari #MahsaAmini pic.twitter.com/sVqkk9qkoA

A soccer player was also arrested and is facing the same fate.

Fears intensified on Tuesday over the fate of 26-year-old Iranian soccer player Amir Reza Nasr Azadani, who was arrested last month and is standing trial in Iran over his participation in anti-government protests https://t.co/nL6JmzBaEM

A famous Iranian singer, Amir Maghare, was arrested and will join dozens of other artists, singers, and actors in prison if not worse.

This morning #AmirMaghare, a popular singer of Iran, was arrested by Islamic Republic Regime because of his stories on instagram about Iranian protesters.
#امیر_مقاره #seytheirnames #MahsaAmini pic.twitter.com/UOIC2ESpvP

Related: Meanwhile, in Libya and Egypt…

Famous Iranian actress Taraneh Alidoosti, who appeared in the Academy Award-winning film The Salesman, was arrested for appearing on Instagram without a hijab and condemning the executions.

Taraneh Alidoosti is one of Iran’s most talented and acclaimed actors. We were proud to screen her latest film, Subtraction at TIFF22. I hope she’s free to keep representing the strength of Iranian cinema soon. #WomanLifeFreedom https://t.co/mTxzmzK8gO

One of those sentenced to death is Dr. Hamid Ghareh Hassanlou, a 53-year-old radiologist. He and his wife Farzaneh were caught up in protests in October. She was sentenced to 25 years of solitary confinement.

Hassanlou was tortured and did not have access to his own lawyer, anti-regime activists say. The attorney appointed by the government reportedly mounted no defense, instead advising his client to accept the charges of crimes against God.

Hassanlou’s brother Hassan, who lives in the Netherlands, tells NPR Hamid is by no means a violent or dangerous man.

“No, no violence at all, quite the opposite,” he says. “On the personality level, very opinionated. And on something he believed in, he could be as stubborn as hell.”

At least 18,000 Iranians have been jailed, with at least 39 at risk of being executed. That number is likely to grow, especially since the demonstrations calling for an end to the regime continue.

In previous cycles of protests since the 2009 uprising, where millions demonstrated against a rigged presidential election, there have been eight other uprisings — all of them eventually petering out after authorities arrested or killed the leaders of the demonstrations. But this time, the movement to get rid of the regime is so widespread and encompasses so many groups that authorities can’t stomp it out as they did previously. The movement is too diffuse — and has learned a lot from previous uprisings.

Make no mistake, a large plurality of the people are still with the oppressors. Some are genuine believers who swallow the propaganda. Others are too scared to join the protests. The revolution has yet to reach critical mass.

Perhaps executing enough people will light the match and set the fires of revolt as it did in 1979.