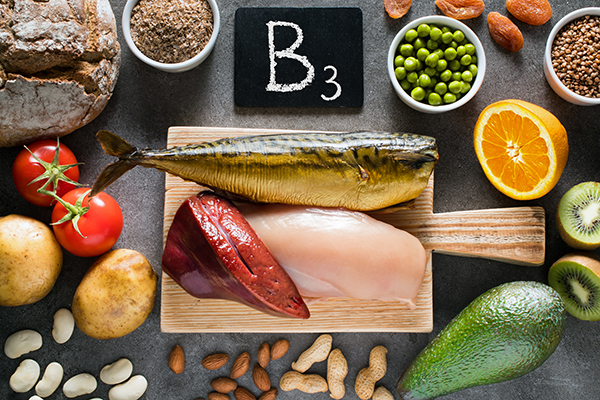 (Natural News)
Vitamin B3 is one of eight B vitamins that help the body convert carbohydrates from many kinds of foods into fuel.

Here are some of the science-backed health benefits of vitamin B3, with particular focus on niacin and nicotinamide.

In a study published in the New England Journal of Medicine (NEJM), Australian researchers expounded on the protective effects of vitamin B3 against skin damage caused by ultraviolet (UV) radiation. UV radiation is the most common cause of skin cancer. The results of the double-blind, randomized clinical trial showed that nicotinamide can reduce the risk of basal cell carcinoma development by 23 percent. The study also found that nicotinamide can reduce the risk of squamous cell carcinoma development by 30 percent. (Related: Niacin – vitamin B3 can prevent melanoma, scientists confirm.)

A study published July 2015 in Medical Science Monitor showed the ability of niacin to reduce the level of lipids and lipoproteins in the blood. Niacin subsequently caused a decreased triglyceride levels – lowering the risk of heart disease. The same study also revealed that niacin helps increase the production of adiponectin, a hormone that minimizes the formation of fatty deposits in the arteries.

Using topical and oral nicotinamide helped boost cellular energy and regulated the production of a key enzyme that aids in skin DNA repair and the suppression of inflammatory cytokines, according to a study published in the Australasian Journal of Dermatology. “Nicotinamide shows promise for the treatment of a wide range of dermatological conditions, including autoimmune blistering disorders, acne, rosacea, ageing skin and atopic dermatitis,” the study authors wrote. “In particular, recent studies have also shown it to be a potential agent for reducing actinic keratoses and preventing skin cancers.”

A paper published February 2019 in the International Journal of Molecular Sciences expounded on the effects of niacin supplementation on brain health. It found that vitamin B3 in the form of niacin protects the bran from neurodegenerative conditions, such as Alzheimer’s, Parkinson’s and Huntington’s diseases. “Optimal dietary intake of the vitamin will support neuronal health and delay neurodegeneration.

What foods contain vitamin B3?

According to an article by Epoch Health, vitamin B3 in the form of nicotinamide can either be consumed from food sources or synthesized naturally by the human body.

A varied diet containing meat, fish, eggs, legumes, brown rice, nuts, seeds and mushrooms can provide sufficient amounts of nicotinamide. It is also a by product of tryptophan metabolism, with the body synthesizing 50 percent of this vitamin B3 form.

Several factors, however, can make a person deficient in this key vitamin. These include chronic diarrhea, intestinal inflammation, the intake of refined carbohydrates and refined sugar and alcohol consumption.

Moreover, over-consumption of corn can cause pellagra – a disease caused by vitamin B3 deficiency. Pellagra is a major disease risk in developing countries that rely on corn as a major food source. While corn is high in vitamin B3, it is bound to carbohydrates. This, in turn, makes it more difficult for the body to absorb this nutrient.

Nutrients.news has more stories about the health benefits of vitamin B3.

Watch this video that discusses six surprising health benefits of vitamin B3, alongside the best dietary sources for it.

This video is from the Groovy Bee channel on Brighteon.com.

Vitamin B3 protects eye degeneration and may prevent glaucoma.