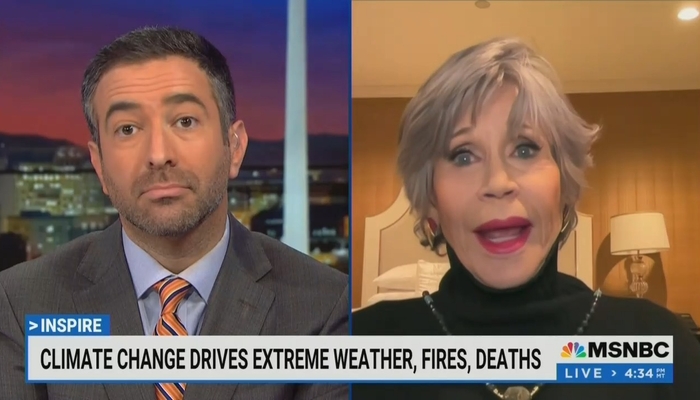 The star of the upcoming “80 for Brady,” featuring Sally Field, Lily Tomlin and Rita Moreno as women flocking to see Super Bowl in 2017, drew some absurd connections to illustrate her point.

Even Al Gore might have winced during her rant.

Here, she explains to MSNBC host Ari Melber her solution to saving the planet from eco-obliteration. 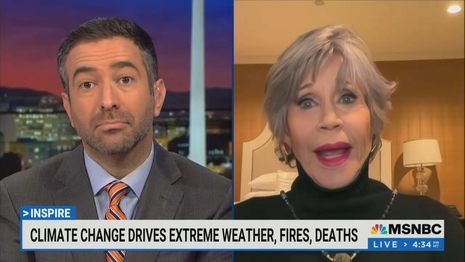 “But, you know, as I learn more about climate and as I dig deep as I have for the last four or five years, what you realize is if there were no racism, there would be no climate crisis. If there was no misogyny, there would be to the climate crisis. It is a part of a mindset. It is the mindset that looks at a woman and says, ‘nice tits,’ or she could work in the fields.

It is the same mindset as the person who looks at the tree and said floors that could make good flooring. Everything is transactional, and hierarchy and certain things matter more than other things. So what has to happen is we not only have to stop new fossil fuel development, we have to change our mindsets.”

Kudos to Melber for keeping a straight face during the exchange. Except she capped it with commentary that speaks to something more profound and, undeniably, true. It’s like she channeled the late Andrew Breitbart.

To paraphrase Breitbart’s core philosophy, “politics is downstream of culture.”

The modern Left knows this better than any group. It’s something conservatives are just starting to realize, witness The Daily Wire’s aggressive foray into entertainment and children’s programming.

Fonda gets it, too, and she explained why to MSNBC viewers.

“We not only have to stop new fossil fuel developments, we have to change our mindsets … and this is where art comes in. This is why I love your show so much. You show how art and politics are intertwined. Culture is above everything. Culture determines how we feel, and what we do and how we act.

Let’s look past Fonda’s description of an America that’s more in line with socialist thinking or ask how much of Fonda’s fortunes she’s donated to charity. Culture matters. We saw evidence of that just this week.

Hollywood put more abortion plotlines in its TV shows in 2022 than in any of the past five years, as the studios and networks ratcheted up the outrage machine following the Supreme Court’s reversal of Roe v. Wade.

Guess which side of the debate Hollywood took? Here’s a hint:

Fonda’s thinking explains why groups like Define American and Everytown for Gun Safety exist. Both work hand-in-hand with screenwriters to bring open borders and gun control propaganda, respectively, to the stories we consume.

Why else would Democrats flock to frothy talk shows hosted by Drew Barrymore and Jimmy Kimmel to crack wise and, in between, push policy proposals?

Conservatives can laugh all they want at Fonda’s climate change “solutions,” but she understands culture and its ramifications better than most people.