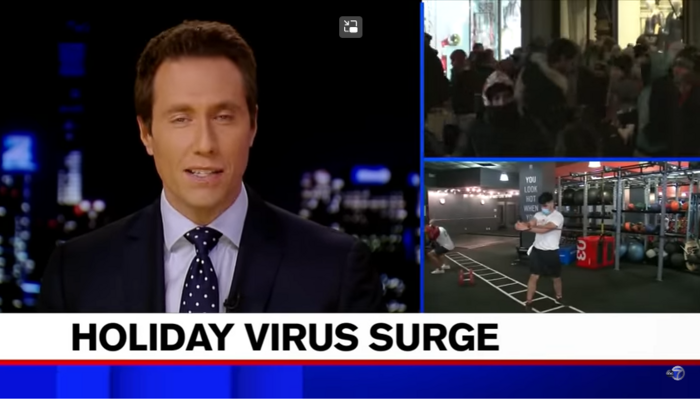 After November 2022’s Red Wave turned out to be a trickle and with COVID case numbers creeping up again, there is fear an emboldened “science”-loving left wing, egged on by a gullible press, will again try to impose draconian COVID-19 rules, including mask mandates.

A Department of Health and Human Services report suggested reinstating mask mandates in the name of stopping the vaguely defined disease “Long Covid.” New York City and Philadelphia are making moves to mask up once again, almost three years into the pandemic and two years after vaccinations have become widely available. Schools in Passaic, New Jersey are reinstating mask mandates, even as adults (including teachers) happily crowd bars, restaurants, and Christmas parties.

The Atlantic magazine is on the strange new mask-every-winter bandwagon as well: “Should Everyone Be Masking Again? — ’Tis the season to cover your nose and mouth.”

Yes, the left-wing mask marauders are crawling back into the public debate, this time repurposing mask mandates in schools to fight the current media-hyped “tripledemic”, i.e. outbreaks of respiratory syncytial virus (RSV) and flu among children. The press is citing a new study from a distinguished scientific journal as evidence. But the new study is as compromised and unconvincing as all the previous ones, with a woke twist that makes it an untrustworthy document.

The recently released “observational” study of mandatory masking in Boston schools, issued by the New England Journal of Medicine, examined two school districts that didn’t rescind their own mask mandates when Massachusetts lifted the mandate in March 2022. As usual with so many “scientific” studies in the COVID era, the science is an inch deep. After the unconvincing case findings are summarized, the true point emerges:

…. we believe that universal masking may be especially useful for mitigating effects of structural racism in schools, including potential deepening of educational inequities….

Is there anything masks can’t do? (Beside stop the spread of COVID, of course.) Predictably, the New York Times jumped on it: “Masks Cut Covid Spread in Schools, Study Finds.”

Speaking of “educational inequities,” it was left-wing teachers unions, not “structural racism,” that kept schools closed for a year or more in many places, especially cities in blue states with disproportionate minority populations.

An enraging ideological double standard toward freedom and restrictions has dominated media coverage of the COVID. While mothers gave birth alone and the elderly died alone, the politically privileged danced maskless during George Floyd protests, some of which devolved into riots.

The “unmasked” are only a problem when crowds gather to mark things the press doesn’t approve of, like Republican Rose Garden ceremonies and college football games. Meanwhile the entertainment elites at Saturday Night Live exploited COVID loopholes to maintain a live audience, and in Hollywood, where a catering station for a film crew was open for business just feet away from a restaurant’s similar outdoor dining space — but the restaurant’s space was shuttered by Los Angeles County.

The ostensible “fact checkers” at Snopes, a trusted source of the mainstream press, actually cited the bravery of Black Lives Matter protesters that flouted COVID social-distancing rules in the summer of 2020 to gather in crowds!  They touted “the movement’s biggest demonstrations in its history, with millions of Americans braving the COVID-19 pandemic to take to the streets, touched off by the killings of George Floyd and Breonna Taylor.”

Protestors also “braved the coronavirus” to rally on Boston Common in June 2020, according to the Boston Globe.

Yet weeks previously, and for months afterward, people gathering en masse to protest authoritarian Covid restrictions were slimed in the press as irresponsible death-spreaders.

The press now acknowledges that regular exercise limits the harms of COVID. Meanwhile, governments shuttered beaches and gyms and skate parks were filled with sand. For your health! And all accomplished with the help and approval of an alarmist press.