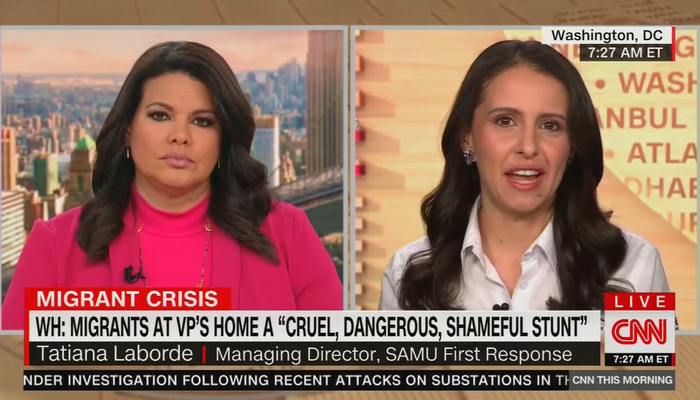 ABC’s Good Morning America on Monday reached back to Saturday’s news to slam Republican Governor Greg Abbott for supposedly sending a group of migrants to Vice President Harris’s house on Christmas Eve, but over on CNN an activist explained that the much-criticized bus trips actually provide a “service to the migrants.” 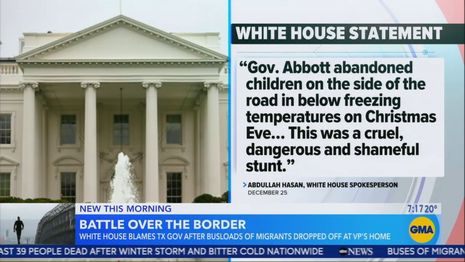 Much as she and the rest of her network did this summer, ABC’s Mary Bruce condemned the bus trip as a “harsh political move,” while her colleague Janai Norman said she found the images “disturbing.” Correspondent MaryAlice Parks centered her report on a White House flack’s condemnation of Texas Governor Greg Abbott — “this was a cruel, dangerous and shameful stunt” — without any criticism of the Biden administration for its years of mishandling the border situation.

But when CNN This Morning interviewed Tatiana Laborde, the managing director of the aid group which met the buses in Washington, D.C., she offered key details omitted from ABC’s report. Most of the migrants wanted to leave Texas, and the DC aid workers were given advance word from a non-profit group in Texas, it turns out, and were waiting with blankets, warm food and buses prepared to take the migrants to their final destination. And she said there was “very little impact” of the buses heading to Harris’s home instead of a different rendezvous.

When guest co-host Sara Sidner attempted to get Laborde to endorse with the Biden White House characterization of the move as “cruel,” she mouthed the Democratic talking points, calling the trip “extremely inhumane,” but went on to explain how in many ways it was actually “a service to the migrants.”

The way they’re doing it is extremely inhumane, but it is a service to the migrants. A lot of them don’t want to stay in Texas. A large majority keep wanting to go up north, so this gets them closer and gets them away from places with very little connectivity into metropolitan areas where taking a bus is much easier, or a train or a plane. So if it’s done correctly, it can really help ease the tensions at the border.

As for the other broadcast networks, NBC’s Today gave the same news about 30 seconds at the start of their 7:30am half-hour, while CBS Mornings served up a largely pre-taped show that did not even mention the migrant buses.

ABC’s one-sided promotion of White House talking points on the border was sponsored by Carmax and BMW.

Here are transcripts of the relevant segments (click expand to view): 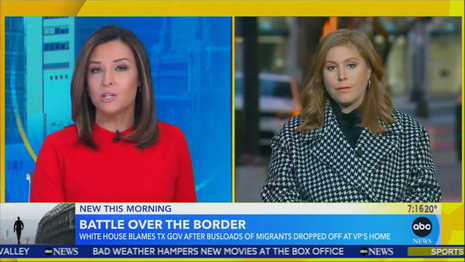 Fill-in host MARY BRUCE: Now to the battle over the border. In an apparent harsh political move, busloads of migrants dropped off on Christmas Eve outside of the Vice President’s home. White House correspondent MaryAlice Parks has more and, MaryAlice, this is not the first time we’ve seen migrants being used like this to make a political point.

MARYALICE PARKS: Exactly. Mary, good morning. It was one of the coldest Christmas Eves on record here in Washington, only about 18 degrees at night when those buses of migrants arrived. And you can see from the pictures and the video that many of the migrants dropped off in front of the Vice President’s house were not even in jackets, definitely not prepared for the cold weather. You can see there were children in the group. The aid workers who met the migrants told us there were more than 100 people who arrived on multiple buses. The White House, pointing the finger right back at Texas Governor Greg Abbott, saying in a statement, “Governor Abbott abandoned children on the side of the road in below-freezing temperatures on Christmas Eve without coordinating with any federal or local authorities. This was a cruel, dangerous and shameful stunt.” The White House went on to call on Republicans to work with them on immigration reform. Now, Governor Abbott’s office did not respond to our request for comment on these latest busloads of migrants, but of course all of this comes as the Supreme Court weighs that Trump-era Covid policy that has let the government basically rapidly expel migrants, Title 42. Both sides waiting on what the Supreme Court will say on that.

Fill-in co-host JANAI NORMAN: Alright, MaryAlice, thank you so much for that update. Really disturbing images.

Fill-in host KRISTIN WELKER: Migrant aid groups are assisting about 140 men, women and children who were dropped off near the home of Vice President Kamala Harris’s house on Christmas Eve. Advocates said the buses that carried the migrants came from locations in Texas along the U.S.-Mexican border. The drop-off appeared to be the latest effort by governors in Republican-led states to send migrants to cities with Democratic leadership such as Washington, New York and Philadelphia. However, activists point out that this time it was done just before the holiday in sub-freezing temperatures. 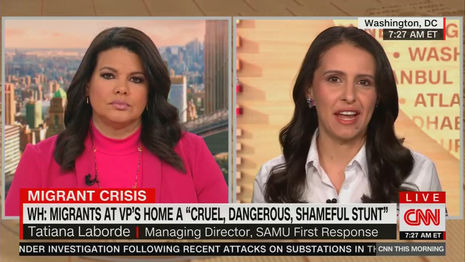 Fill-in host SARA SIDNER: …Can you give me a sense of what it was like. Did any of the migrants have any idea where they were going?

TATIANA LABORDE, Managing Director SAMU First Response: Good morning, and thank you for having me. Yes, a majority of them already reached their final destination. We had about sixty percent of those migrants that were headed to New York City to either shelters there or to meet friends and family. And this is a pattern we’ve been seeing over the past couple of months.

SIDNER: What did you and your staff see when you got there and experienced?

LABORDE: So we were prepared for very cold weather, so there were blankets available for all migrants and we had a respite center ready to receive them. We had warm food and our team was there, understanding that Washington was not their final destination and ready to help them move forward.

SIDNER: Do you have a sense — the Texas governor has not, at this point, said anything or responded to comments from the White House that they believe that Governor Abbott is responsible for sending the buses there. Do you have any sense of, you know, how you decided they came from Texas? Did they tell you that?

LABORDE: Yeah. We got a heads up from one of the nonprofits at the border that those buses were headed our way. We were expecting them yesterday morning, but they showed up the night before. Thankfully we had enough time to shift our logistics for Christmas Eve.

SIDNER:  Tatiana, what do you make of the fact that they were dropped off in front of the Vice President’s home?

LABORDE: At this point, they’ve been doing that for so many months that we have the system already down and it’s just another spot that has very little impact. We have buses on site ready to just move them quickly and get them to a safe place.

SIDNER: Do you think this is, as the White House has said, it’s sort of a cruel decision being made with people’s lives?

LABORDE: Well, there’s two ways to look at it, right? The way they’re doing it is extremely inhumane, but it is a service to the migrants. A lot of them don’t want to stay in Texas. A large majority keep wanting to go up north, so this gets them closer and gets them away from places with very little connectivity into metropolitan areas where taking a bus is much easier, or a train or a plane. So if it’s done correctly, it can really help ease the tensions at the border….

British police hiring illiterate officers, some with criminal backgrounds, in hopes of meeting diversity quotas: Report
Joy Reid: ‘What Happened to Tyre Nichols Was as American as Apple Pie’
‘Unwoke’ With Kevin and Kruiser #60: Can Diversity Dems Ditch Kamala?
Woman allegedly met 87-year-old Holocaust survivor on dating site, conned him out of millions that she blew on luxury items
On PBS, Amanpour Warns LGBTQ ‘Human Rights Are Under Fire’ from ‘Strange’ DeSantis