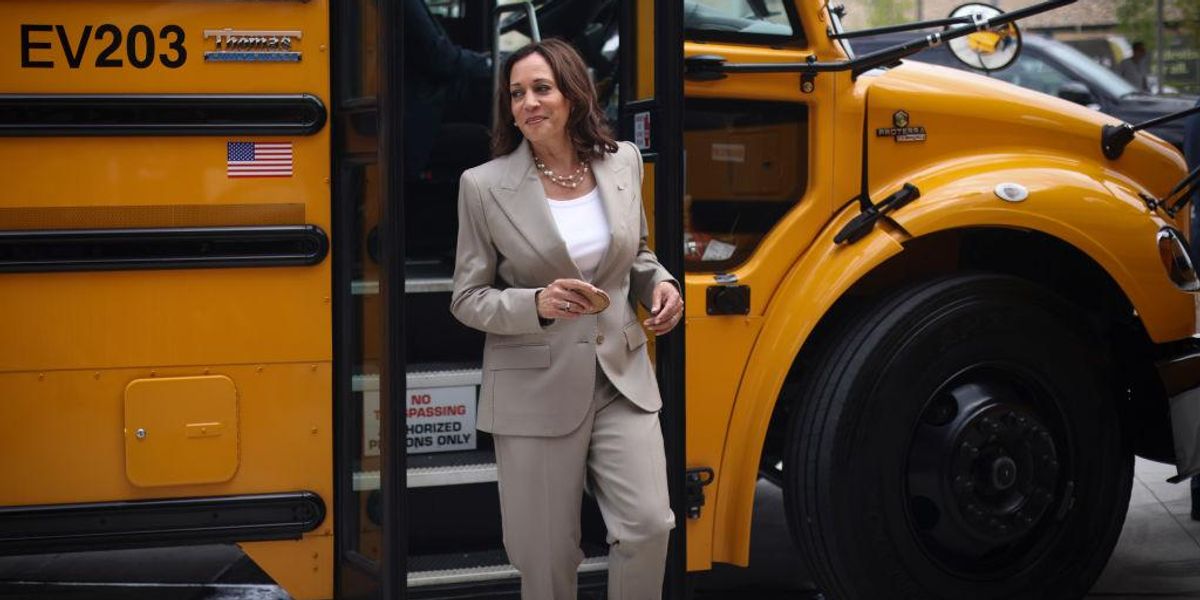 The White House denounced the move, suggesting that it served only to “put lives in danger.”

Not in Kamala Harris’ backyard

Three buses containing approximately 130 of the 465,034 criminal noncitizens who have illegally entered the country so far in fiscal year 2023 rolled up to Harris’ Washington residence at the Naval Observatory on Christmas Eve.

Harris, who previously stressed the need to be “welcoming” of illegal aliens, apparently did not invite the criminal noncitizens inside, despite the 15-degree weather.

CNN reported that two busloads were taken to local shelters. Other illegal aliens were given blankets and put on another bus headed to a local church.

White House spokesman Abdullah Hasan stated, “Governor Abbott abandoned children on the side of the road in below-freezing temperatures on Christmas Eve without coordinating with any federal or local authorities.”

Hasan characterized this latest effort to transport illegal aliens to a sanctuary city and others like it as “political games [that] accomplish nothing and only put lives in danger.”

The White House spokesman further claimed that the Biden administration, which has seen over 5 million illegal aliens enter into the country under its watch, is “willing to work with anyone – Republican or Democrat alike – on real solutions, like the comprehensive immigration reform and border security measures President Biden sent to Congress on his first day in office.”

Notwithstanding the Biden administration’s alleged commitment to work on “real solutions,” TheBlaze previously noted that Biden has provided foreign nationals with incentives to illegally enter the country, such as health care, an end to detentions of illegal border crossers, an end to deportations, and amnesty, extra to seeking to lift the Trump-era Title 42 policy.

Bringing the border to Biden

Reuters noted that Abbott has not yet claimed responsibility for sending the buses to Harris’ doorstep; however, the governor did reiterate on Dec. 20 that the Lone Star State will “continue busing migrants to sanctuary cities.”

According to Newsweek, the governor’s spokesperson Renae Eze appeared to confirm that Abbott was behind the Christmastime delivery, noting that the illegal aliens “willingly” chose to go to Washington on Saturday.

“The White House is full of a bunch of hypocrites, led by the Hypocrite-in-Chief, who has been flying planeloads of migrants across the country and oftentimes in the cover of night,” said Eze.

As for the criminal noncitizens who turned up at Harris’ house, Eze noted they had “signed a voluntary consent waiver available in multiple languages upon boarding that they agreed on the destination. And they were processed and released by the federal government, who are dumping them at historic levels in Texas border towns like El Paso, which recently declared a state of emergency because of the Biden-made crisis.”

“Instead of their hypocritical complaints about Texas providing much-needed relief to our overrun and overwhelmed border communities, President Biden and Border Czar Harris need to step up and do their jobs to secure the border—something they continue failing to do,” added Eze.

Despite the White House’s accusation of cruelty, Abbott has underscored that the responsibility for this humanitarian crisis lies with Biden and his administration.

Abbott sent a letter to Biden on Dec. 20, demanding that he deploy federal assets to “address the dire border crisis … as a dangerously cold polar vortex moves into Texas.”

“This terrible crisis for border communities in Texas is a catastrophe of your own making,” wrote Abbott. “These communities and the state are ill-equipped to do the job assigned to the federal government—house the thousands of migrants flooding into the country every day. With perilous temperatures moving into the area, many of these migrants are at risk of freezing to death on city streets. The need to address this crisis is not the job of border states like Texas.”

Abbott added, “You must execute the duties that the U.S. Constitution mandates you perform and secure the southern border before more innocent lives are lost.”

In the meantime, one nonprofit that aids illegal aliens has indicated that busing is not the worst way forward.

“What they’re seeing is much worse than what we see here. The three buses are just a small portion of what they experience on a day-to-day,” said Laborde. “If things like this are done in a coordinated and humane manner, it could really be a good option for those border towns that are struggling.”

Although criminal noncitizens briefly suffered the cold in Washington, those whom Biden told to come suffer worse fates when attempting to steal into the country.

The New York Post reported that illegal aliens face “freezing temperatures, fast-moving water, and the risk of being kidnapped by cartels or taken advantage of by human traffickers” when traveling to the U.S. southern border.