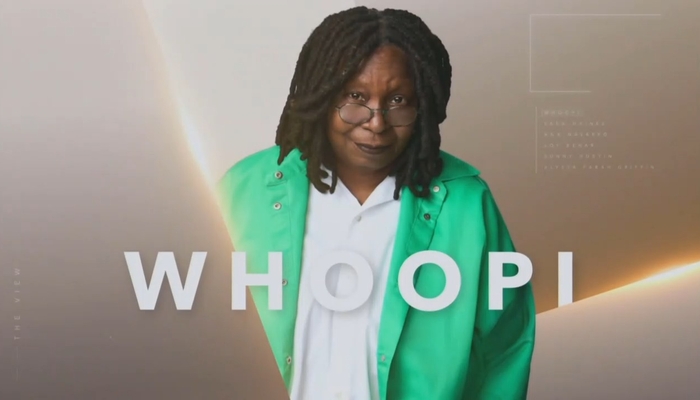 The View is on vacation until 2023 but co-Host Whoopi Goldberg has still managed to get herself in hot water. In an interview with The Sunday Times of London over the weekend, Goldberg doubled down on her anti-Semitic revisionist history about the motive of the Holocaust, falsely suggesting it wasn’t about race and, and claiming European Jews easily could have evaded the Nazis because their skin wasn’t black.

Goldberg argued that, after being informed that the Nazis believed they were purging the world of inferior races, people should have stopped listening to them : “Yes, but that’s the killer, isn’t it? The oppressor is telling you what you are. Why are you believing them? They’re Nazis. Why believe what they’re saying?”

Either ignoring or ignorant of the fact that Nazis practiced a perverted form of phrenology (measuring proportions of the head to identify certain traits) and eugenics, Goldberg asserted Jews would have had an easier time evading the Nazis than she would have: “It doesn’t change the fact that you could not tell a Jew on a street. You could find me. You couldn’t find them. That was the point I was making.”

She failed to explain how this comported with Jews being placed in ghettos and needing to hide away, as with the famous example of Anne Frank and her family.

As the cherry on top, she whined about how angry people had been at her comments earlier in the year. “But you would have thought that I’d taken a big old stinky dump on the table, butt naked,” she huffed.

This latest bout of Holocaust revisionism came nearly a year after she referred to it as merely white-on-white violence. “White people doing it to white people. So, this is y’all go fight amongst yourselves,” she proclaimed at the time (which NewsBusters was first on the scene to report). Adding: “Well also, if we’re going to do this, then let’s be truthful about it because the Holocaust isn’t about race.”

In the aftermath of that incident, Goldberg got personal absolution and an education on the Holocaust from Anti-Defamation League CEO Jonathan Greenblatt. “I said something that I feel a responsibility for not leaving unexamined because my words upset so many people which was never my intention,” she said back then. “And I understand why now, and for that, I am deeply, deeply grateful because the information I got was really helpful and helped me understand some different things.”

She was later suspended for two weeks, (read: she got to go on a vacation).

In response to this latest incident, Greenblatt told USA TODAY, “Whoopi Goldberg’s comments about the Holocaust and race are deeply offensive and incredibly disappointing, especially given that this is not the first time she had made remarks like this.”

But as Goldberg is on his team politically, he still wanted to give her a way out, saying that she just needed to “apologize to the Jewish community immediately and actually commit to educating herself on the true nature of antisemitism and how it was the driving force behind the systemic slaughter of millions.”

“And I want to thank everybody who reached out while I was away,” she said after coming back from the suspension. “And it was amazing, and I listened to everything everybody had to say, and I was very grateful.”

Clearly, that at was a lie. She apparently hasn’t learned anything and harbors great animosity for those who spoke out against her. But she got a second chance because she’s a liberal, something not afforded to the political right. Will she get a third?

U.S. General Warns We’ll Be at War With China in Two Years
Hollywood Actress Annie Wersching, Best Known For Roles in ’24’ and ‘Star Trek,’ Dead at 45
Florida mother suing school district for banning her from volunteering because she’s an OnlyFans model
School district blasted for racism after it calls 4th graders’ snowman ‘just as diverse as our students’
Video surfaces of CDC official calling for WHITE GENOCIDE to eliminate all white vaccine refusers in America