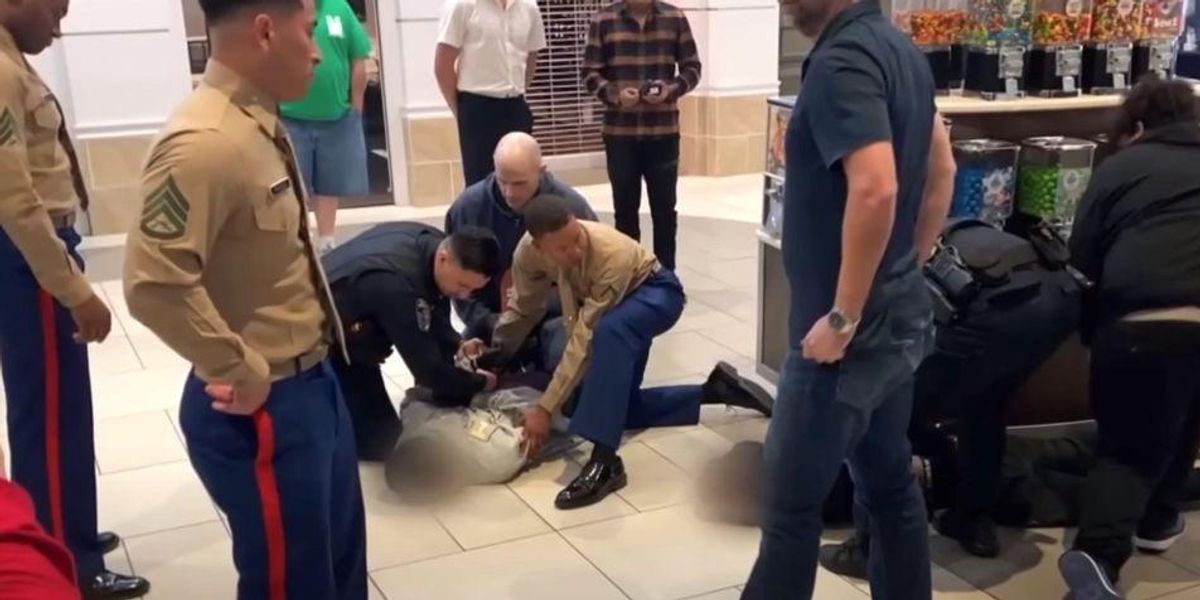 A group of crooks learned the hard way that targeting a jewelry shop near a U.S. Marine recruiting office for a smash-and-grab attempt was a very foolish thing to do.

The incident unfolded at the Del Amo Fashion Center in Torrance, California, on the afternoon of Dec. 20.

Police said that four suspects wearing hoodies and covering their faces used hammers to smash glass cases at a jewelry store and then ran off with numerous pieces of merchandise.

That’s when Marine recruiters from a nearby military recruiting office jumped into action.

They were able to tackle two of the suspects along with the help of other bystanders, and they held them down until police could arrive. Two other suspects in the robbery were able to get away.

A man who would only identify himself as Ralph was able to record part of the incident on his cellphone. He said he was doing last minute Christmas shopping with his wife when he saw the robbery.

“[It was] the Marines. The Marine Corps … They stepped up, they tackled them down,” said Ralph to KTTV -TV.

“Two got away, two got tackled down, and they stepped it up,” he added. “That’s enough. Time to fight back.”

The two suspects detained by the Marines were minors, according to police, who also said they were able to recover a “large amount” of jewelry from the scene.

The owner of the jewelry store didn’t want to be identified, but he said that it was a family-owned store.

“It’s getting wild in the streets now,” continued Ralph. “It’s about time, to fight back, enough’s enough. A lot of stores are closing down just for this, the smash and grab.”

Here’s a local news video of the enjoyable incident:

Man falls off cliff and dies making ‘daredevil’ TikTok video
‘The choice is between normal or crazy’: Arkansas governor delivers Republican speech after Biden’s State of the Union
CNN Reports Poll Showing Largest Economic Dissatisfaction in 37 years
Deceased 96-year-old woman found in a freezer in a garage during police wellness check, her daughter has been arrested
The part of the Tyre Nichols story that they leave out