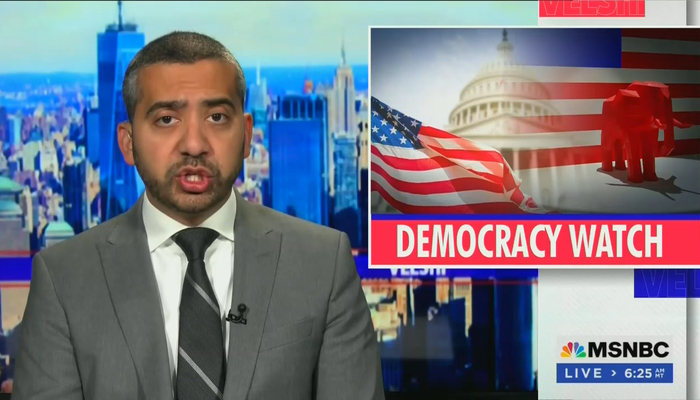 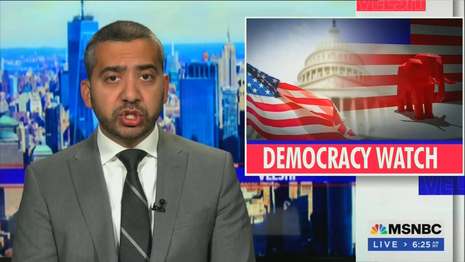 Here’s a multiple choice question for you: “Is it fair to describe the modern GOP as ‘neo-fascist’ or ‘proto-fascist’ or, to quote Joe Biden on the MAGA movement, ‘semi-fascist?’” That’s what fill-in host Mehdi Hasan asked on the December 31 edition of MSNBC’s Velshi, as he wailed that Republicans becoming the majority in the House of Representatives on Tuesday might lead the media to actually “normalize” the GOP as an actual legitimate political party.

Although Hasan grudgingly admitted Republicans won a majority of votes cast in the 2022 midterms, there was no suggestion that progressives and liberals had any lessons to learn from their loss of the House. Instead, the entire discussion was about discrediting the new GOP majority as an illegitimate party and a radical threat to the health of the political system.

“The big question, the drama is, you know, how do you — when one party in a bipartisan system exits democracy, how do you govern?” NYU history professor Ruth Ben-Ghiat wondered.

“When a party exits democracy, all of the norms of professional ethics… go out the window,” Ben-Ghiat later added. “This leads to a kind of free-for-all in doubling down and barreling through and doing what you need to do to establish minoritarian white Christian rule.” 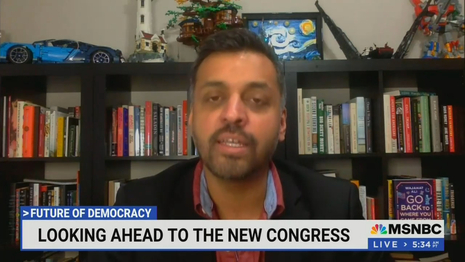 Wajahat Ali, a columnist for the Daily Beast, added his take: “How does a democracy sustain itself when one of the two political parties is committed to radicalization, extremism, conspiracy theories, white supremacy, political violence, and loves people like [President] Viktor Orban of Hungary, that sees him and his backsliding democracy in Hungary as a model; that reveres [Prime Minister Giorgia] Meloni in Italy — a fascist with lipstick, right?”

Yale University philosophy professor Jason Stanley answered the multiple choice question about how to describe the Republican party: “There’s certainly within the modern GOP, as the scapegoating of LGBT citizens demonstrates, a fascist movement rising….That’s what the modern GOP is increasingly looking like — as Ruth said, an anti-democratic party. I think ‘semi-fascism,’ ‘fascism,’ ‘neo-fascism,’ these are accurate descriptions.”

This segment aimed at discrediting the entire Republican Party was brought to you by Nugenix.

Here’s video of that exchange, followed by a short transcript:

Fill-in host MEHDI HASAN: Jason, the GOP is back in power again, at least in the House of Representatives, which means there will be a fair bit of normalizing of them again by the media. In your view, is it fair to describe the modern GOP as ‘neo-fascist’ or ‘proto-fascist’ or, to quote Joe Biden on the MAGA movement, ‘semi-fascist?’ 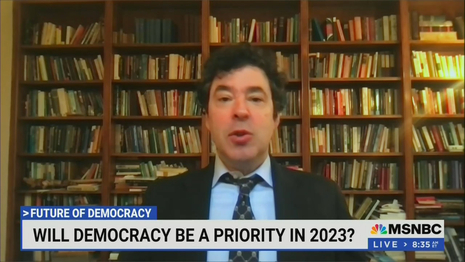 JASON STANLEY:  There’s certainly within the modern GOP, as the scapegoating of LGBT citizens demonstrates, a fascist movement rising. We — and, to talk about this as some kind of European thing is a confusion, since fascism is Jim Crow with a foreign accent. So we have a native, we have multiple native far-right extremist movements: Christian Nationalism, we’ve got, sort of, heritage of Jim Crow. We’ve got an anti-democratic business establishment. And this is a structure, a grouping, that’s is going to bring people to vote for an authoritarian party. And that’s what we have, that’s what the modern GOP is increasingly looking like — as Ruth said, an anti-democratic party. I think ‘semi-fascism,’ ‘fascism,’ ‘neo-fascism,’ these are accurate descriptions. We need to drop talk of populism, drop these misleading descriptions that hide what we are actually facing.

Damar Hamlin speaks publicly for first time since on-field collapse: ‘With God’s guidance, I will continue to do wonderful and great things’
PBS NewsHour Special Pushes Liberal Line on Guns and American Racism
Serial predator R. Kelly won’t face state charges in Illinois: ‘We believe justice has been served’
The part of the Tyre Nichols story that they leave out
Ex-judge in Las Vegas previously under ethics investigation dead of apparent suicide: ‘They have terrorized and lied about me’