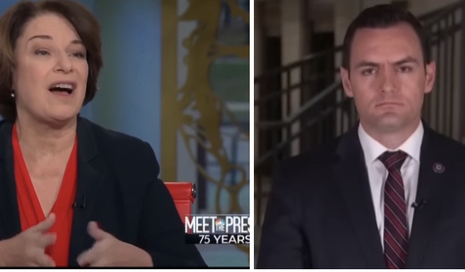 Both lawmakers appeared on NBC’s “Meet the Press” Jan. 1 to discuss proposed regulation of Big Tech. While Gallagher called for more focus on algorithmic regulation, Klobuchar claimed that making it possible for social media to be sued for not censoring “misinformation” is a step that should be taken.

Klobuchar mocked the idea of social media being the new town square and thus speech made there being protected by the First Amendment on NBC. Regarding Section 230, the senator claimed that Big Tech companies have become communications companies. “You can amend it and focus on certain kinds of speech misinformation, disinformation. And all you’re saying is, ‘We know people are going to put stuff on your alleged town square,’ which has become really a communications company,” Klobuchar rambled.

“They are a publisher,” Klobuchar insisted with more passion than grammar. The senator tried to claim the size of the companies precludes their immunity, but ignored the fact that it is Big Tech’s size and inexorableness that makes it much like the digital town square. Klobuchar did not mention that the government has already worked with Big Tech to censor online.

Gallagher, on the other hand, pushed for more algorithm transparency but saw Klobuchar’s proposals as encouraging social media to increase censorship by more “proactively” removing content. They did agree on one thing. “I do think more transparency around the algorithms is necessary. And I liked what Senator Klobuchar was saying on that front,” Gallagher said.

Gallagher has spoken out against the dangers of Big Tech before. The representative called Chinese social media app TikTok a national security risk. He told NBC host Chuck Todd it would be dangerous for the Chinese Communist Party to “control what is on the cusp of becoming the most powerful media company in America.”

Gallagher ultimately offered a different solution than Klobuchar, “I think a better framework might be, mandate data portability across platforms so you’re able to bring your network to whatever platform has the best content moderation policy and best transparency that you like.” He said he’s open to conversing more with Klobuchar on tech regulation, and emphasized individual responsibility.

“When it comes to our kids, the government can’t raise your kids, can’t protect your kids for you,” Gallagher explained. “I have two young daughters. It’s my responsibility to raise them into healthy adults. But there are certain sensible things we can do in order to create a healthier social media ecosystem.”

New GOP governor to deliver Republican speech after Biden’s State of the Union address
Cracking Under Pressure? Don Lemon Reportedly Screamed At Co-Host, Leaving Crew Rattled
Will There Be Drama at Tonight’s State of the Union?
New York detective reprimanded for kicking on-duty reporter out of amusement park for speaking with a child
Is Joe Biden a Chinese Asset?