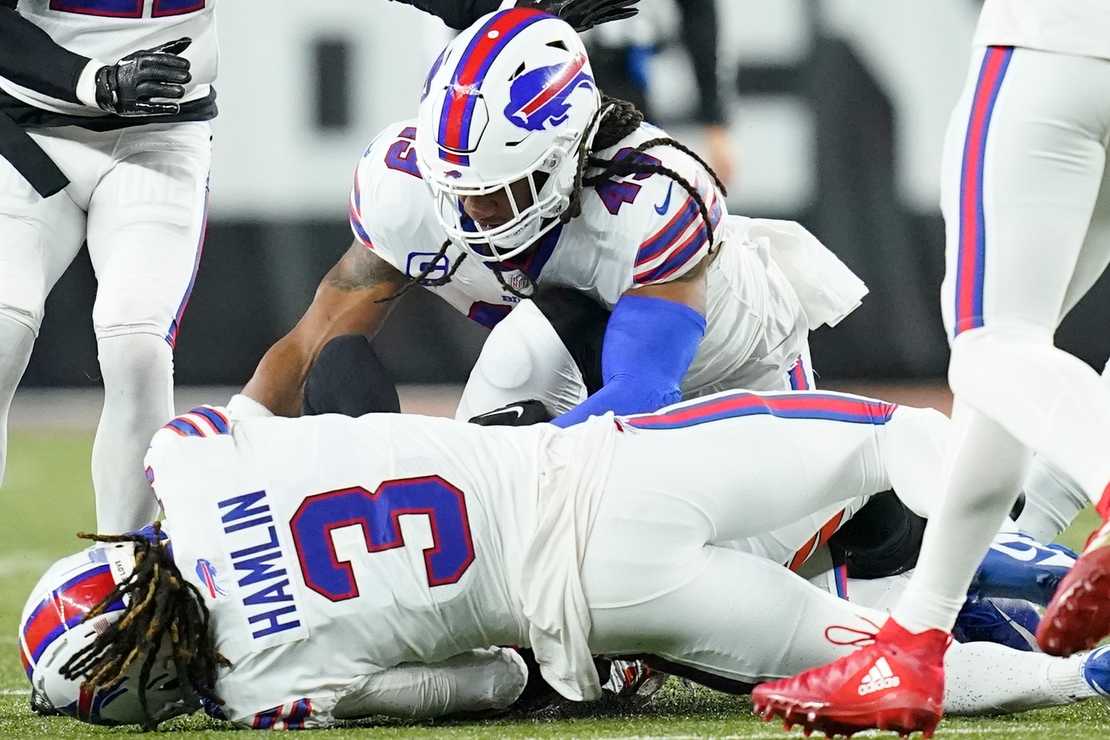 This is going to be ugly, but someone has to say it.

Damar Hamlin’s tragic collapse isn’t a “gotcha” moment for the unvaccinated. It’s a wake-up call for everyone else.

Most of you know that the “vaccines” don’t do what Dr. Fauxi claimed they would do — keep us from getting the Bat Stew Flu and keep us from transmitting it.

Some of you are probably aware that the media is fighting to keep the word off the street that the shots are causing a lot of suffering — and perhaps death.

Football fans will remember Uche Nwaneri, the former Jacksonville Jaguar, who called for the imprisonment of the filthy unvaxxed.

Ok so lets get these vaccine mandates and Vaccine passports up and running ASAP. We seeing children DIE daily from the unvaccinated selfishness. Pregnant women at risk too. PROTECT LIFE. MANDATE THE VACCINE. Jail anyone who refuses, to protect LIFE

What football fans may not know is that Nwaneri, 38, died on Dec. 30 of acute heart failure. CNN didn’t cover the story. It was easy to ignore. Nwaneri dropped dead in a house, far away from cameras, the night before New Year’s Eve. His death might also get people talking.

Monday night’s collapse of the Buffalo Bills’ Hamlin can’t be ignored because it happened during a Monday Night Football game as millions of Americans were watching. So now people are whispering about the thing the left doesn’t want to talk about: that vaccines might be dangerous.

As some of you know, Stephen Kruiser is a very good friend of mine. We talk on the phone like school girls used to before they could text. We discussed some of the things that could have brought Hamlin down:

Professional athletes do collapse. It’s rare. Or at least it used to be.

We can’t jump to conclusions and point to the vax every time an athlete — who is pushing his or her body to the extreme — falls down and stays down. But it might be time to admit what millions of vaxxed people don’t want to admit: that the shots, which were pushed by our elected leaders — and embraced by the left — might be harmful, or even deadly, to some people.

Talking about it won’t be easy. Your lefty neighbor who couldn’t wait to haughtily vaccinate her children doesn’t want to admit she may have harmed her kids for the sake of virtue-signaling.

Imagine the super-size helping of crow this lefty jackpudding teacher will have to eat after telling her student that not getting vaxxed is “killing people,” that there is “zero reason” not to get the shot, and how not getting the vaccine could result in a student “creating a variant that could literally kill everyone on the planet.”

Fortunately, her students know better and let her know.

Those of us who chose not to take the whackzines took a beating. We couldn’t go to a restaurant in New York City. Family members banned us from holidays. They called us “granny-killers.” Some liberal clowns clamored for us to pay higher insurance premiums. Many wanted us imprisoned. Some wanted us to die.

Jimmy Kimmel mocks the unvaccinated, says they should be refused ICU beds. pic.twitter.com/DNQTUMctOD

It’s easy to see why the Fauci-fawning liberals don’t want to talk about the mere possibility that the shots might be dangerous. It’s hard to go all in for the shots and then say, “oops, our bad.” That’s a really high horse to fall from.

Watch TV’s favorite a** clown, the vaxxed-and-boosted Whoopi Goldberg, admit she has had COVID twice but tell her millions of fans the numerous shots saved her life. Never mind that 58% of the COVID deaths in August 2022 were among those who had their jabs as well.

How can the left ignore the 700-pound needle in the room when even the FDA has linked the Pfizer shot to blood clots? Easy: It beats admitting they were wrong.

“Not eating meat, abolishing cars and planes, normalizing blackouts, etc. is ghoulish, yes — but may be necessary” pic.twitter.com/9W69TmTde8

Related: Embalmers Are Making Shocking Discoveries in the Blood of the Dead

One of the glaring differences between conservatives and liberals is that we aren’t monsters. Leftist miscreants celebrated when unvaxxed conservatives like Herman Cain died of COVID. I don’t know of anyone on our side hoisting whiskey glasses to the death of Nwaneri, despite his adamant demand that you and I go to jail.

Not only will the left not admit that they might be wrong about the shots, but they’d also rather silence those who dared to consider the possibility that our government lied to us about the entire COVID narrative.

VIDEO: Canadian actress Jennifer Gibson admits that AFTER SHE TOOK THE VACCINE she was STRICKEN WITH BELL’S PALSY! It Paralyzed One Side Of Her Face JUST LIKE JUSTIN BEIBER AFTER HE GOT THE VACCINE!!! #VaccinesArePoison pic.twitter.com/zeOuDJWMXH

I can’t declare that vaccines are killing people, but I do think it’s time to consider the possibility. Sadly, watching our sports heroes fall down may be the catalyst we need to start the conversation.

Why won’t the leftists admit they may have been wrong? Because, like Whoopi Goldberg, they are stupid.

Watch Matt Christiansen as he brilliantly lays out how dummies are incapable of admitting they were wrong.

‘Unwoke’ With Kevin and Kruiser #60: Can Diversity Dems Ditch Kamala?
‘I’m of Puerto Rican descent and I find it offensive’: Democrats seek to ban government use of ‘Latinx’ in Connecticut
Health freedom advocate Jonathan Emord is running for U.S. Senate in Virginia â€“ learn more about him here
We Are Not ‘At the Brink of World War III’ — At Least Not Yet
‘American Taliban’ Was Released Early — and Promptly Met with an ISIS Recruiter