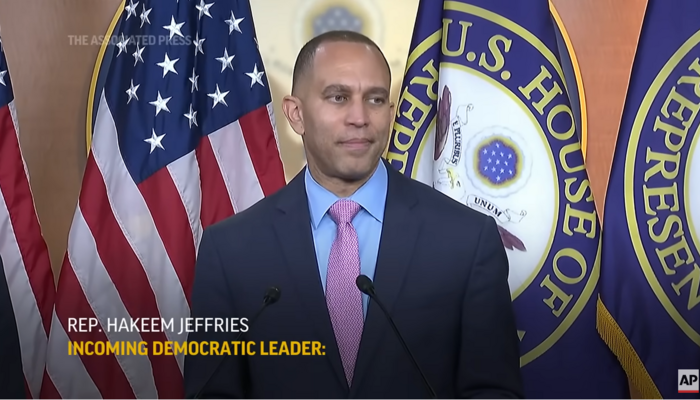 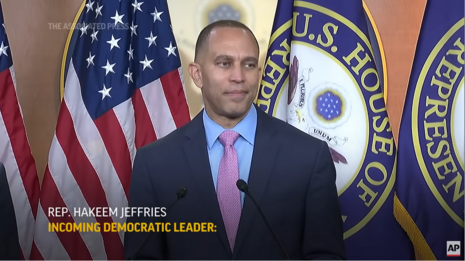 On January 4, NPR’s All Things Considered did a story on McCarthy failing to win support alongside a story headlined “Looking back at a decade of GOP hard-liners in Congress.” But they also spent almost three minutes touting Jeffries as the first black lawmaker nominated for Speaker of the House.

Co-host Juana Summers touted how “Jeffries repeatedly earned the support of every member of his caucus — the first time a Democratic leader has done so since 2007. That’s the year when they elected Nancy Pelosi.” Co-host Mary Louise Kelly added: “The symbolic torch-passing received a standing ovation from Democrats.”

Then came a parade of happy Democrat quotes. From Pete Aguilar, the new House Democratic Caucus Chair: “A Latino is nominating for leader of this chamber a Black man for the first time in our history….We are unified behind a speaker who is an unapologetic advocate for protecting and expanding our freedoms.”

The Democrats expand your freedoms?

Rep. Al Green added the systemic-racism note: “And still I rise, and I proudly cast my vote on behalf of the enslaved people who built this Capitol. I cast my vote for the honorable Hakeem Jeffries.” Rep. Yvette Clarke lauded Jeffries as the “bad, brilliant brother from Brooklyn.”

Meanwhile, to represent the view NPR refuses to consider, Kyle Martinsen of the Republican Party’s messaging team sent around a memo on how all 212 Democrats voted for Jeffries despite the small problem that his “record of election denialism is well documented — and thoroughly unhinged.” Among the claims:

1. Jeffries declared the 2016 election was “rigged,” and a “hoax,” and a “cloud of illegitimacy” hangs over Trump.

3. Jeffries said “the more we learn about 2016 election the more ILLEGITIMATE it becomes.”

5. Jeffries referred to Trump as a “fake president” at least 73 times.

Martinsen summed up: “In total, Jeffries denied the legitimacy of the 2016 election at least 163 times.”

CNN host Jake Tapper proclaimed in 2021 that he wouldn’t book any “election liars” on his shows. That didn’t include election-denying Democrats, because this is CNN.

Tapper had a few challenging questions for Jeffries on his November 20 State of the Union program, but it began with some rapper’s delight: “Jeffries will be, without question, the first congressional leader to ever paraphrase Naughty By Nature on the floor of the House.” Tapper was impressed: “I have to say, I have never seen such a major transition from leaders to leaders so well-choreographed with so little apparent rancor. How did this happen?” There were no questions about denying elections.

On January 3, Nicholas Fandos at The New York Times helpfully reported “Allies say Mr. Jeffries is an exceptionally calm strategist and communicator,” and touted his friend Aguilar claiming, “He does not bend a knee to anyone who would seek to undermine our democracy because, Madam Clerk, that’s not what leaders do.”

On Jeffries, the media elites look like election-denier deniers.