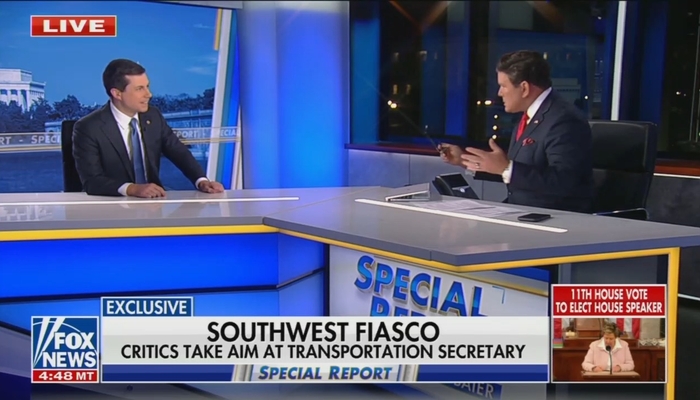 Thursday night on the Fox News Channel’s Special Report, host Bret Baier spent nearly 11 minutes holding Transportation Secretary Pete Buttigieg’s feet to the fire in a way the liberal media have failed to do over the multiple airline meltdowns, private flights, and supply chain crises that unfolded on his watch.

While the liberal media have treated Buttigieg as a consumer advocate shocked by these crises, Baier put him and the Department of Transportation in the fold as having to share the blame.

After opening with a question about the House speakership vote and another on President Biden’s remarks about his border crisis, Baier fired off the first hardball by noting that, back in September on CBS’s The Late, Late Show, “you said that you thought that” airline travel would “get better by the holidays,” but that was wrong: “Why did you miss the mark so bad? Is there anything that the DOT could have done differently ahead of what we saw this debacle at the holidays?”

Buttigieg insisted the industry “made a ton of progress since the summer” and all but Southwest Airlines was able to recover quickly from wintery weather around Christmas with that airline having “failed to invest in the kind of I.T. systems that they needed.”

Normally, those talking points plus demands for accountability would have worked, but not for Baier: “So was the DOT aware of Southwest Airlines’ antiquated system for scheduling prior to Christmas?”

Buttigieg deflected by stating he doesn’t “run Southwest Airlines’s I.T. systems,” leaving Baier to try one more time: “Understood, but you said back on The Late Show that you were confident that they’d be ready to service the tickets that they’re selling.”

The D.C. area darling stuck to his talking points that it’s on the airlines when it comes to failures, but he can take credit for when things run smoothly.

Moments after a question of whether Buttigieg would call for Southwest “leadership to resign or something like that,” Baier turned up the heat by grilling him on what many believe was “low profile during the Southwest debacle,” being away “in Portugal during the rail strike crisis,” and “on paternity leave during the 2021 supply chain crisis.”

Buttigieg said those concerns were “nonsense” and began addressing each of them. On the supply chain backups, he insisted he “worked that issue before, during, and after the time that I was focusing on my children” and argued the holidays were a massive success. On the rail strike, he proclaimed he “was on the ground,” at the Capitol, and “on the phone” as part of a team to fix it.

Baier then went to private jets: “What do you say to people who ask is it environmentally responsible to fly on private government jets when commercial options are available?”

BUTTIGIEG: When we’re making a decision about what aircraft to use, we weigh a lot of things. That’s one of the things we consider. So is saving taxpayers money. Now, I fly the majority of the time on — in economy class on an airliner just like everybody else. In fact, I think I should say that again, because I’m not sure everybody has read past the headlines, but, as you know, even this network’s reporting has made clear that the majority of the time I travel on an airliner in economy class just like everyone else. But there are cases where we use and FAA jet, a jet that’s assigned to my department. I’ll give you an example. I went to Wisconsin recently. This was last year, I think. A lot of good paying jobs that are coming in. We’re working with the operating engineers there to make clear to high school students that whether they want a college degree or not they can get good paying construction jobs because of the work that we’re making possible.

BAIER: Yes, and I understand, and —

BUTTIGIEG: Hold on. We saved taxpayers $2,000 by using the FAA’s jet instead of flying buying those airlines tickets.

BUTTIGIEG: Not a private flight, a government aircraft.

BAIER: Well, understood, but the taxpayers are still paying for it.

BUTTIGIEG: Right, and the taxpayers are usually saving money when we do that.

Baier tried a different approach and one with a half-decent memory would recall: “Well, you know, that is one of the controversies that led to other secretaries leaving. For example, Secretary Price of HHS sat at this very desk and defended a government trips, and he then left.”

Buttigieg replied by doubting Price saved money, leading Baier to counter “he originally said he did.”

Baier wrapped with a 2024 exchange on whether Buttigieg would run for Senate in Michigan now that he and his husband Chasten are residents and the retirement of Senator Debbie Stabenow (D), but not before one more back-and-forth on a private flight.

Incredibly, Buttigieg insinuated the criticisms of that flight were homophobic (click “expand”):

BAIER: You also brought your husband Chasten on a military aircraft to attend a sporting event in Netherlands. Is that —

BUTTIGIEG: That’s quite a spin to put on it.

BAIER: No, no, no. But was that reimbursed? Because that was one of the controversies with Price.

BUTTIGIEG: Of course not. I lead a Presidential delegation to support American wounded warriors and injured service members —

BUTTIGIEG: The Invictus Games, as has been tradition for many years. I led the American delegation. It was one of the great honors of my time in this job. And the diplomatic protocol on a Presidential delegation is that the principle is often accompanied by their spouse. It was a great trip. It was incredible. It was also a few weeks into the Ukraine war. So we had a chance at the U.S. embassy to engage with the Ukrainian competitors, also wounded service members. Some of them went from the games back to the battlefield to fight for their country. I also took the opportunity to sit with the prime minister of the Netherlands to look at port infrastructure, Dutch port infrastructure. But here’s what I want you to understand. Before me it was the Secretary of the Army under President Trump who took that trip with his wife. Before that it was Mrs. Trump as first lady who went to the Invictus Games. Before that, Mrs. Obama did the same thing. And I guess the question on my mind is, if no one’s raising questions about why Secretary Esper and his wife led that delegation, as well they should have, then why is it any different when it’s me and my husband?

To see the relevant transcript from January 5, click here.

‘That’s why’: Biden can’t hide his annoyance when reporter confronts him about taking blame for inflation crisis
Trump Exposed His Fear of DeSantis in 2024
Charles Koch Is Jumping Back Into National Politics in a Big Way
Gun Accounts Turn to Rumble as YouTube Takes Aim at Firearm Content
Eurasian eagle owl escapes Central Park Zoo via vandals, continues evading rescue