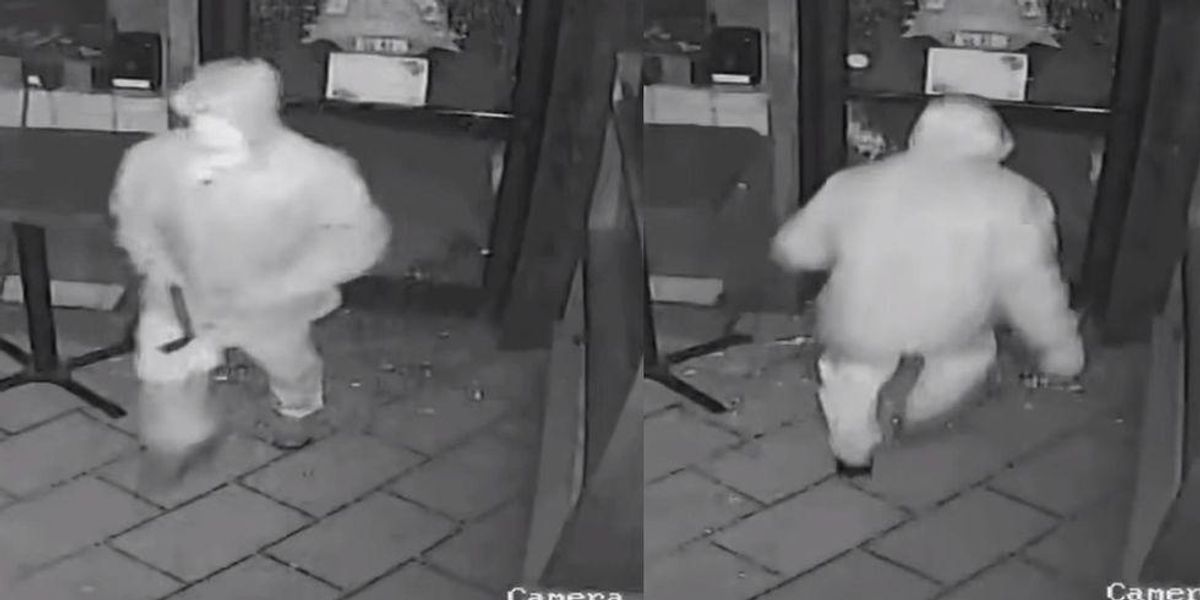 Ohio police ridiculed a “criminal mastermind” who took the effort to break into a pub but got away with exactly zero dollars.

The Summit County Sheriff’s Office
posted surveillance video of the unidentified suspect from Brubaker’s Pub on Massillon Road in the city of Green near Akron.

The video shows a man breaking the bottom glass pane of the entrance door and then crawl into the pub. He skulks around and eventually makes his way to the cash registers.

He tries to jump over the counter, but he’s too short and fails. Instead, he runs around the counter to access the registers.

Unfortunately for him, the registers were empty.

The video shows him run out the same door he damaged and jump over a patio railing to escape in his vehicle.

The attempted robbery happened on December 23 at about 3:12 in the morning during a snowstorm, so police dubbed the suspect the “Blizzard Bandit.”

They are asking for the public’s help in identifying the suspect.

They described the suspect as a white man who is “short in stature” and was wearing a hooded coat. He drove off in what appeared to be a gray Ford sedan.

Anyone with information about the “Blizzard Bandit” is encouraged to contact detectives at 330-643-2131.

Ohio Gov. Mike DeWine (R) signed into law on Tuesday a new 1,000-page criminal justice
reform bill that would allow some criminals to expunge their records so that they could seek employment, housing, or receive a loan. It also reduced the penalties for minor marijuana offenses as well as under-age drinking offenses.

Here’s the video of the Blizzard Bandit:

America’s Inferno: Satanism Is Becoming More Mainstream
Video from Chicago ‘takeover’ captures woman falling out of a car doing stunts and getting run over
282 reported sexual assaults closed without disciplinary action at public university
BBC forced to apologize after transgender guest goes on unhinged rant against JK Rowling: ‘We should have challenged the claims’
Biden sends 31 Abrams M1 tanks to Ukraine after previously warning that doing so would lead to World War III