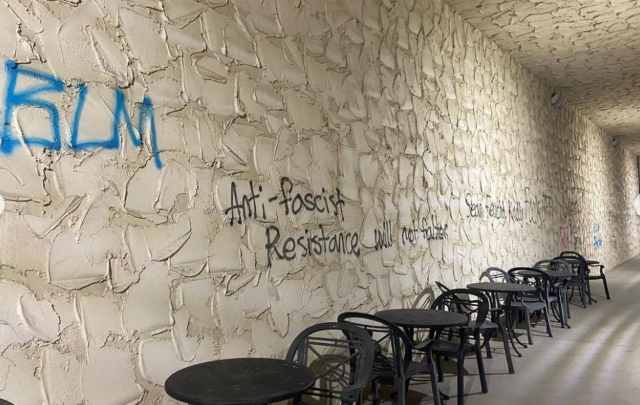 (Natural News)
A noted Christian church leader posted photos to his social media pages ahead of a New Year’s Eve event at which he was to appear, showing hateful graffiti that left-wing anti-religious vandals posted.

“Let Us Worship” and “Hold The Line” founder Sean Feucht posted images on Instagram and YouTube Saturday morning, according to the website Church Leaders. He said the vandalism was due to his upcoming performance there.

The site noted that Feucht performed at City View Church in San Diego, Calif., at 9 P.M. on New Year’s Eve. He went on to say that police are investigating the incident as a potential hate crime.

“Last night, bigots spread hate and violence at a church where we are holding a New Year’s Eve event in San Diego,” Feucht wrote in a Saturday Instagram post. “The police are investigating it as a hate crime. The enemy making the age old (sic) mistake. Persecuting the Church won’t stop the gospel, it’ll spark a wildfire.”

Last night, bigots spread hate and violence at a church where we are holding a New Year’s Eve event in San Diego.

The police are on scene investigating it as a hate crime

Make no mistake – The radical left is intolerant. WE WILL NOT BACK DOWN. pic.twitter.com/WvAZ4lBIXK

In addition to defacing church property with vulgar messages of hate, the vandals also reportedly broke a window after they defaced it with spray paint, the Church Leaders site reported.

Feucht told the website that the vandalism is “a fear tactic, it’s intimidation, and you know, we don’t get discouraged when fear comes, we actually get emboldened and this is a chance for the church of California to take a stand to rise up in unity and to say, ‘We’re not going to let persecution, bigotry, hatred, vandalism, stop us from worshiping. The church isn’t a building. We’re the bride of Christ and in 2023, we’re rising up like never before.”

It’s no surprise that there is so much anti-Christian hatred in the U.S. and throughout the left-led West. It’s been rising for years thanks to a commensurate decline in Christian traditions and influences in our culture and various societies.

As noted by Frontpage Magazine in January 2018:

This is evident everywhere and in a myriad of forms.  Most recently, the British government “refused to say whether telling people about the Christian faith could be a hate crime.”  Lord Pearson of Rannoch, a UKIP peer, asked the House of Lords if they would “confirm unequivocally that a Christian who says that Jesus is the only son of the one true God cannot be arrested for hate crime or any other offence, however much it may offend a Muslim or anyone of any other religion?”  Government spokesperson Baroness Vere of Norbiton responded equivocally, adding that the legal definition of “hate crime” has been the same for the past 10 years.

But as Pearson explained in a later interview, the current definition of “hate crime” is subjective and revolves around whether the “victim” feels offended—thus leaving the door wide open to charging those who proclaim Christ and the Trinity of committing a hate crime, especially vis-à-vis Muslims, who adamantly object to the claim, as Pearson himself acknowledged.

“Certainly the stricter Muslims do feel offended by Christianity and our belief in Jesus being the only Son of the one true God,” he said.

That shouldn’t matter. Western values are premised on the freedom to worship as one pleases (thanks to America’s founding fathers — their concepts were eventually adopted by other democratic societies). But when intolerance is permitted to thrive…it will.