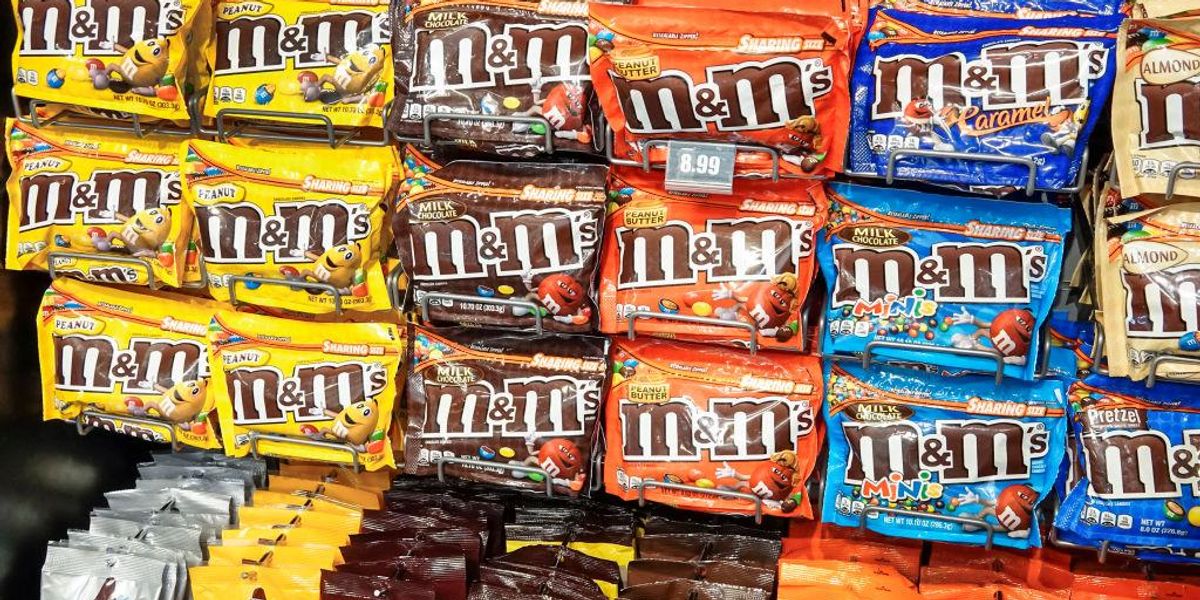 Mars, the parent company of the beloved M&M’s chocolate candy, has decided to go “woke” — again. On Thursday, the company announced that it will offer a special edition “all-female” M&M’s package which will feature the new Purple character designed to promote inclusivity.

M&M’s had teased the addition of a new color for a while and had asked fans to make their preferences known through a vote. When the final votes had been tallied, purple had bested pink and aqua.

With the new color comes a new member of the iconic M&M’s cartoon characters, all of whom have their own unique personalities. Purple, described as “quirky, confident and authentic,” is designed to promote inclusivity. She is the first female peanut M&M and therefore, according to some observers, promotes body positivity. On Tuesday, she made her official debut in an ad in which she walks around the backstage of a theater and sings a song entitled “I’m Just Gonna Be Me.”

“There is so much about our new spokescandy that people can relate to and appreciate,” Jane Hwang, global VP at Mars Wrigley said of Purple, “including her willingness to embrace her true self — our new character reminds us to celebrate what makes us unique.”

Along with the curvy new Purple character, the “all-female” M&M’s package will also include Green and Brown, two traditionally female characters who have been given a new, less feminine look. Green has abandoned her knee-high white boots with stiletto heels in favor of sneakers. Though Brown — who enjoys the tagline “Not bossy. Just the boss” — continues to wear heels, she, too, has toned down the sex appeal, preferring a lower and more square-shaped heel these days to the pointier heels she wore in the past.

In addition to the limited colors, the “all-female” M&M’s package — which will come in milk chocolate, peanut, and peanut butter varieties — will also feature an upside-down image of the characters on the packaging itself to represent the ways in which women are “are flipping how they define success.”

“Women all over the world are flipping how they define success and happiness while challenging the status quo, so we’re thrilled to be able to recognize and celebrate them,” Mars Wrigley North America chief marketing officer Gabrielle Wesley said. “And who better to help us on that mission than our own powerhouse spokescandies Green, Brown and Purple?”

And Mars has promised to put its money where its mouth is. The company intends to donate up to $500,000 to two organizations which promote female musicians: “She Is The Music” and “We Are Moving the Needle.” It will also donate an additional $300,000 to other nonprofits dedicated to supporting women, Fox News reported.

Though the “all-female” M&M’s promo might frustrate many consumers who just want to buy candy without an attending socio-political message, it should not come as a surprise. New Mars CEO Poul Weihrauch has encouraged the brand to evolve so that it corresponds to what the company calls a “more dynamic, progressive world.”

And all the way back in 2017, a tweet from M&M’s went viral because it seemed to suggest Green and Brown were in a lesbian relationship. The tweet features Green and Brown on a sandy beach. The two are sitting on a bench, and Green’s hand is placed suggestively on Brown’s lap. “It’s rare Ms. Brown and I get to spend time together without some colorful characters barging in,” Green says in the message.

u201cItu2019s rare Ms. Brown and I get to spend time together without some colorful characters barging in. u2013 Ms. Greenu201d

Though the tweet was originally posted in 2015, it did not go viral for another two years.