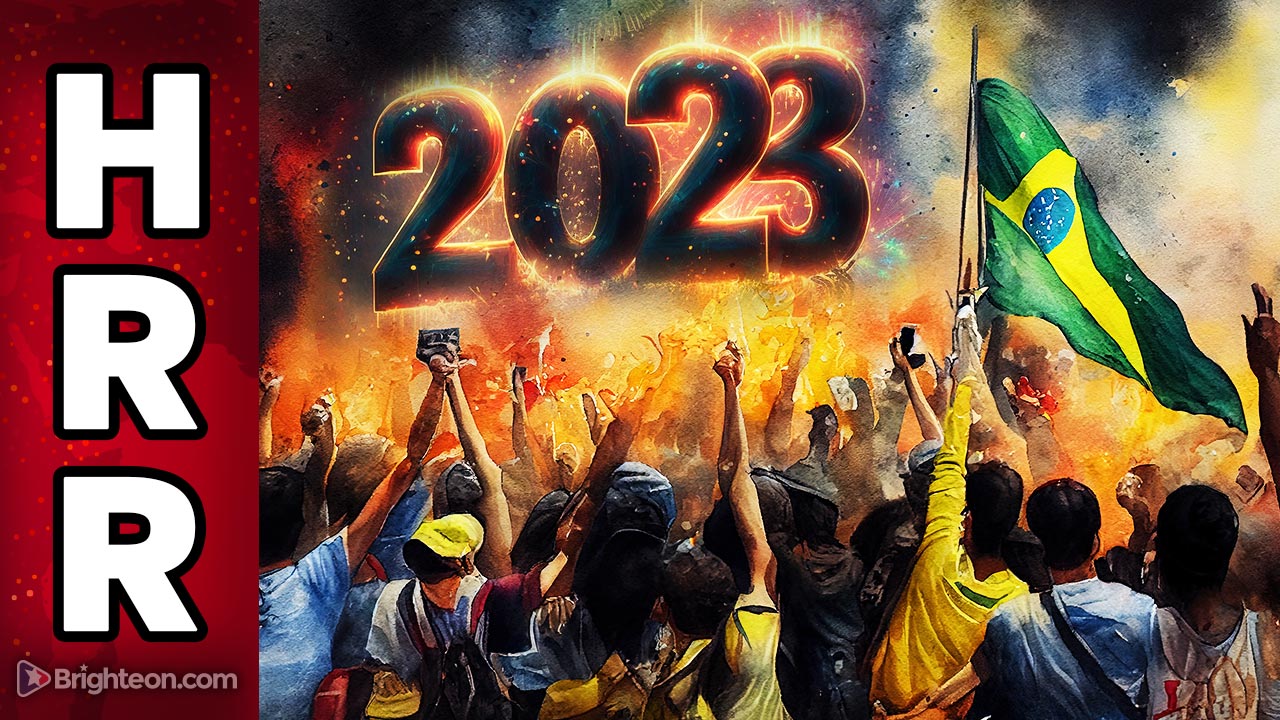 (Natural News)
The mass uprising in Brazil — which increasingly looks like a carbon copy repeat of the J6 “insurrection” playbook run by the FBI — is just one of many popular revolts we will see this year as large populations awaken to the truth about tyranny and genocide.

As people are red pilled, they come to realize these astonishing but true facts:

Must see: Steve Quayle’s new documentary Lies of Men and Gods at www.GenSix.com – this covers the transhumanism attack on humanity and the rise of the luciferian genocide pushers.

With the criminal felon president Lula in power in Brazil, that country will collapse into Venezuela territory. They’re already using a J6-like playbook to round up and persecute hundreds of pro-Brazil nationalists who protested the rigged election there. They are fighting for their lives because they know that if Lula is allowed to remain in power, Brazil will become a genocidal, dictatorial regime that wages war on its own people, much like the Biden regime in the USA (or the Trudeau regime in Canada).

Most likely in 2023 or 2024, we will see the final engineered collapse of western fiat currencies (dollar, euro, yen), orchestrated to drive the enslaved masses into CBDC systems that function as financial surveillance and control systems run by globalists. This event will, of course, be presented to the public as some sort of crisis — most likely a cyber attack on the banking system — that “requires” everyone to give up their fiat currency and private bank accounts in order to achieve “protection” and “security” offered by the Fed through CBDCs.

The CBDC rollout will not go well, we predict. It will be met with intense, sustained resistance for the simple reason that a growing number of people already know what these evil globalists are up to. Anyone participating in a CBDC loses control over their finances, since a government can simply shut off your digital wallet at any moment… which is exactly what Brazil has been doing to the bank accounts of protesters.

I cover all this and much more in today’s Situation Update podcast:

– Why do people activate Google in new cars, being tracked everywhere they go?
– Iranian national charged with terrorism in Germany
– “Mohammad” attacks solar power plant in Vegas, sets car on fire
– How Romans created self-healing concrete that modern science is just now understanding
– Newly discovered comet to pass near Earth in weeks, may be VISIBLE to the eye
– Feds tell banks to dump crypto in preparation for CBDCs
– Crypto contagion continues: Genesis may be the next to fall
– China buys another 30 tons of gold in preparation for new reserve currency launch
– Brazil on the verge of civil war / government collapse with mass protests
– Lula stole the election and rigged it all, just like USA
– More vaccine deaths strike sports players and newscasters
– Texas Gov. Abbott tells Joe Biden he’s too late to stop the invasion of illegals
– California storms will affect the food supply
– Thousands of NYC nurses to strike
– HEY COPPER TOP: 6G tech to use the human body as a power source