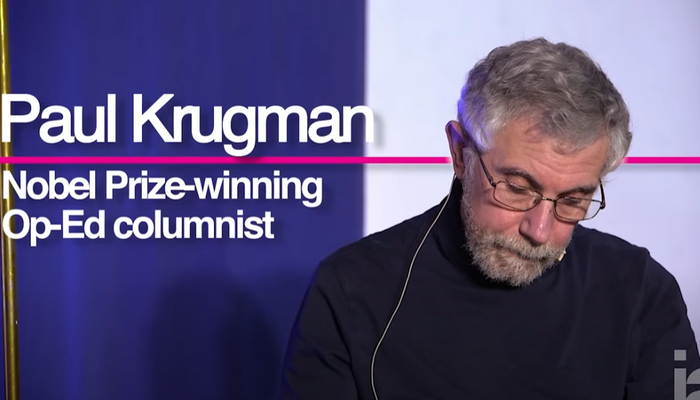 The often wrong but never in doubt New York Times economics columnist Paul Krugman is clearly neck-deep in denial about how bad the Biden economy really is. He whipped out a new catch-all to accuse so-called “election deniers” of also being “economy deniers.” 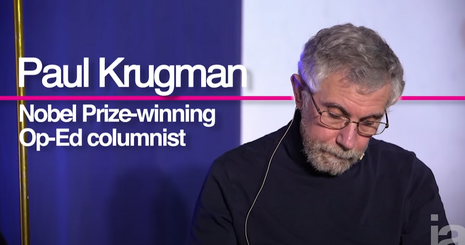 Krugman railed in his Jan. 9 column, “Election Deniers Are Also Economy Deniers,” that “G.O.P. economic views are almost as divorced from reality as their political fantasies are.” It’s a mystery how Krugman can legitimately bellyache about people being “divorced from reality” in the face of his own dirty laundry list of terrible “transitory” inflation calls and gaslighting Americans on a made-up “Biden boom” in 2022. But Krugman, suffering from a complete lack of self-awareness, babbled against Republican congressional members for daring to “believe that the U.S. economy is in terrible shape, with the federal government at great risk of going bankrupt.” Talk about arrogance.

Krugman didn’t even admit that he disastrously missed the mark on his inflation calls until the 10th paragraph:

The price surge of 2021-22, coming after decades of low inflation, was a nasty shock, and I don’t want to minimize either the size of that shock or the extent to which many economists, myself included, failed to see it coming.

Forbes released a Dec. 31 piece headlined: “Outlook: 2023 Recession Likely Deeper And Longer.” The magazine noted that “in 2022 we just experienced a flat (no growth) economy (at least through Q3).” In November, Forbes also noted that “[a]ccording to the general definition—two consecutive quarters of negative gross domestic product (GDP)—the U.S. entered a recession in the summer of 2022.” [Emphasis added.]

However, in Krugman’s distorted view, “There wasn’t a recession in 2022. Indeed, the U.S. economy ended the year with continuing strong job growth and the unemployment rate all the way back down to what it was before Covid.” He also touted the “seriously encouraging” data on “wages” as part of his premature celebration about inflation supposedly cooling off. He linked out to a tweet by economist Jason Furman alleging “stable/negative growth of around 4.5%–consistent with about a 3.5% inflation rate (and somewhat lower in the last few months).” [Emphasis added.]

But as is religiously the case with Krugman’s arguments, he’s misleading his readers. With regards to wages and job growth, economist Peter Schiff pointed out that “A decline in wage growth doesn’t mean that #inflation is cooling off. It just shows that workers are falling even further behind as inflation heats up.” He continued: “That’s why #job growth will continue as more already employed people are forced to take second and third jobs just to keep pace.”

Schiff is correct. Another column by Krugman colleague Peter Coy ran a headline that completely undercut Krugman’s argument: “Workers Are Losing in the Inflation Battle.”

Johns Hopkins University economist Steve Hanke also noted Jan. 10 in a tweet that “The share of US households struggling to pay bills GREW BY 39% from Oct 2021 to Nov 2022” due to persistent inflation. [Emphasis added.]

Krugman, however, fawned that “financial markets have basically declared the inflation threat over: They’re implicitly predicting roughly 2 percent inflation as far as the eye can see.” But as Bloomberg News reported a day after Krugman’s propaganda was released, “Markets Are Underestimating Inflation Again.” Carmignac Fund Manager Frédéric Leroux told Bloomberg News outright: “‘Inflation is here to stay.’” He continued: “‘After the crisis central bankers thought they could decide the level of interest rates. In the past two years they realized they don’t: inflation does.’” Krugman seems to just get a kick out of being on the wrong side of the economic argument.

Conservatives are under attack. Contact The New York Times at 800-698-4637 and demand it continue to distance itself from Krugman’s awful economic takes.

Florida Man Friday: Get the Real Poop on His Late-Night Deposit at Joe’s Crab Shack
Tom Brady, 45, says he’s retiring ‘for good’ from NFL: ‘Thank you guys for allowing me to live my absolute dream.’
PBS NewsHour Special Pushes Liberal Line on Guns and American Racism
Former National Football League Player Almost Died from “Severe” Stroke
‘If you need to arrest me, I understand’: US Marine allegedly flew from Louisiana to Florida to have sex with 14-year-old girl he met online