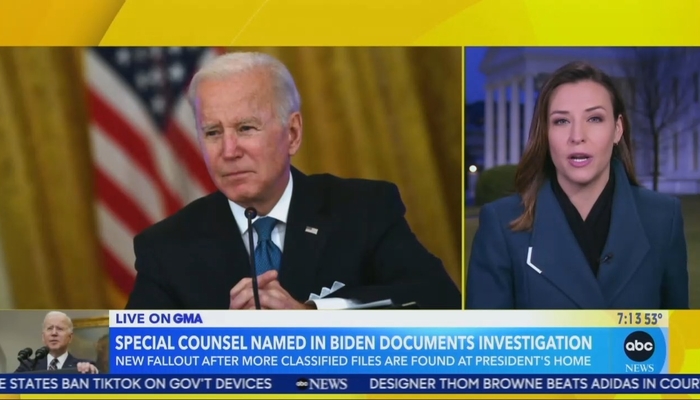 Friday morning’s broadcast network news shows spanned the spectrum of effectiveness on the growing scandal with classified documents having been found in possession of President Biden’s (faux) think tank office and his Wilmington, Delaware home. ABC’s Good Morning America played the role of liberal spin artists, NBC’s Today tried to bore you to sleep, and CBS Mornings continued the network’s crusade against the pathetic lack of transparency from Team Biden.

ABC chief Justice correspondent Pierre Thomas had the first of two segments by trumpeting the supposed independence of Attorney General Merrick Garland: “The AG has always maintained he would run the Justice Department independently. Now, in a dramatic step, he’s made the most independent move he could possibly make: He’s authorized a serious investigation into his boss, the President of the United States.”

“This morning, President Biden’s handling of classified documents, the subject of a full-scale criminal investigation, by his own Justice Department,” he added, concurring with Garland’s use of the word “extraordinary” to describe what’s unfolded.

Laying out the timeline of what the documents were discovered, Thomas neglected to mention how the public was kept in the dark until Monday.

After he played sound of Biden being questioned by Fox’s Peter Doocy as proof of the President being “on defense,” Thomas boasted of how “Biden’s supporters were also quick to point out” how the Mar-a-Lago case against Donald Trump is more serious.

Senior White House correspondent Mary Bruce would do much the same, but not before co-host and former Clinton official George Stephanopoulos lamented that this scandal “interrupts what had been a good run for the White House.”

Bruce agreed, fretting “this is now dominating everything here with this administration” as it’s so “political explosive” that they have to be “very careful and cautious.”

Bruce then pivoted to downplaying the Biden documents (click “expand”):

THOMAS: And the White House counsel’s office saying the documents were inadvertently misplaced and that the Biden’s team quickly responded to, “the mistake.” Biden’s supporters were also quick to point out the special counsel’s investigation into Donald Trump’s mishandling of documents is dramatically different. They say Trump took hundreds and fought efforts to retrieve them and that Biden’s team immediately reached out to the appropriate officials once they found he also had classified documents. President Biden and some of his aides now facing the potential of grand juries, subpoenas, and the potential that the special counsel might want to question the President himself, George.

BRUCE: They are not wanting to go beyond those very carefully worded statements from the President and his legal team and, of course, they are very quick to point out that the real differences between how Biden handled these documents immediately turning them over to authorities and how President Trump acted, spending months resisting requests for the hundreds of classified documents stored at Mar-a-Lago. But there is no question this puts this White House in a really awkward position, having dueling special counsels with the former and current President at the center of them, just as we know these two could very well be running against each other in the next presidential race, George.

Bruce offered mild criticism that the White House hasn’t had “a clear explanation” for the months-long delay in disclosing this and that she’s “pressed the White House repeatedly on this” (which is debatable), but she ended with more White House compliments that “they insist they are doing this by the book.”

Even though NBC’s Today started with the Biden documents and co-host Hoda Kotb teased it as “a big move in Washington,” they left a lot to be desired.

“The President now facing a special counsel investigation over his handling of classified documents. That decision coming amid new revelations about the discovery of additional materials…at the President’s home in Delaware,” announced co-host Savannah Guthrie.

Chief White House correspondent Peter Alexander followed by saying Garland “did just” what “Republicans this week have been pressuring” him to do in appointing a special counsel.

“White House saying that it is confident a thorough review will show these documents were inadvertently misplaced. This morning, President Biden’s handling of classified documents is under scrutiny after Merrick Garland announced he appointed a special counsel to investigate,” he added.

Unlike Thomas, Alexander conceded that it took “two months” for “the first batch of documents” to “[become] public following media reports.” Of course, he threw a jab at Trump, saying “there’s no evidence any of” his documents “had been properly declassified.”

Guthrie and chief Washington correspondent Hallie Jackson then had analysis that could best be described as stating the obvious (click “expand”):

JACKSON: The key part of that, Savannah, in the legal case, is going to be intent. That’s the most important thing according to legal experts I’ve spoken with. And that is what the President’s attorneys are really trying to emphasize, that this wasn’t intentional. It was an accident. You keep seeing the word inadvertent in these statements. They’re also emphasizing that they immediately reported it and cooperated with investigators. This seems like a clear signal to those who are investigating it that they did not have the intent to do anything wrong here. That’s crucial.

GUTHRIE: Let’s talk about the politics because, needless to say, former President Trump —

GUTHRIE: — faces his own special counsel investigation with regard to the classified documents that were discovered at Mar-a-Lago. And there’s a lot of whataboutism, equivalencies being set up between these two cases and it’s a classic where-you-stand-depends-on-where-you-sit moment in Washington. How is that playing out?

JACKSON: So, on Capitol Hill, look at it from the GOP side first, Savannah, they want investigations, they want a damage assessment, for example, to see what happened here. As we head into 2024, I imagine they’re going to try to use this, to your point, Savannah, to neutralize criticism of former President Trump. On the Democratic side, I’m already hearing this from members of Democratic leadership, that one of these things is not exactly like the other — right — that there are key distinctions when it comes to things like what we know right now, volume, for example, questions about cooperation, et cetera. That is something that Democrats are emphasizing and will likely continue to do so as long as this special counsel investigation remains open.

CBS Mornings was anything but pedantic. Co-host Vladimir Duthiers opened CBS’s coverage by calling “the discovery of those additional documents marked classified…more trouble for the President in a case that could get worse in the days ahead.” Tossing to correspondent Adriana Diaz, Duthiers reminded viewers she “broke this original story,” which “has become the story of this short year.”

For their second segment, co-host and Democratic donor Gayle King played a portion of senior White House correspondent Ed O’Keefe’s epic battle Thursday with White House Press Secretary Karine Jean-Pierre on why the administration didn’t publicize the document revelations when they were unearthed.

After King said she “watch[ed] from my kitchen” and saw there was “definitely frustration from the White House press corps” with Jean-Pierre, O’Keefe uncorked his disdain with the lack of public transparency as “there was nothing stopping the President…from disclosing to the public that this had happened back in November” and December (click “expand”):

O’KEEFE: There’s different kinds of transparency at work here, Gayle. There’s the legal transparency that they say they are doing and — and — and, you know, working with the Archives, working with the Justice Department and going by the book. Lawyer to lawyer, investigator to subject. What they’re not being is publicly transparent or straight with the American people about what happened here. There was nothing stopping the President of the United States from disclosing to the public that this had happened back in November. But as we pointed out, it happened just a few days before the election. Was that part of the reason why they opted not to disclose this? That’s one of the unanswered questions. There was nothing stopping him in December from disclosing it when the second batch was found at his Wilmington home. Why didn’t he decide to disclose it then? It’s another unanswered question. And they have decided for now here at the White House to be legally transparent with the Justice Department but not be straight with the American people and answer all the questions in hopes that the legal matter can be dealt with quickly and that they can move on.

KING: And the court of public opinion, Ed, as we know, can get very loud and doesn’t go away. So, how do you see this playing out politically? I’m still so confused about how boxes marked classified leave the White House at all.

KING: How — how do you see this playing out?

O’KEEFE: Well, there’s the ongoing Justice Department investigation that will now be led by a special prosecutor…[T]here are going to be investigations held by Republicans who now run the House of Representatives…So, there will be a legal fight for the President and there will be a political mess on Capitol Hill. And, in the meantime, unanswered questions that we will continue trying to get answers to, regarding what did he know, when did he know it, and if not, who did?

The lackadaisical reporting and liberal spin on ABC and NBC was brought to you by advertisers such as Citi (on NBC) and Walgreens (on ABC). Follow the links to see their contact information at the MRC’s Conservatives Fight Back page.

To see the relevant transcripts from January 13, click here (for ABC), here (for CBS), and here (for NBC).