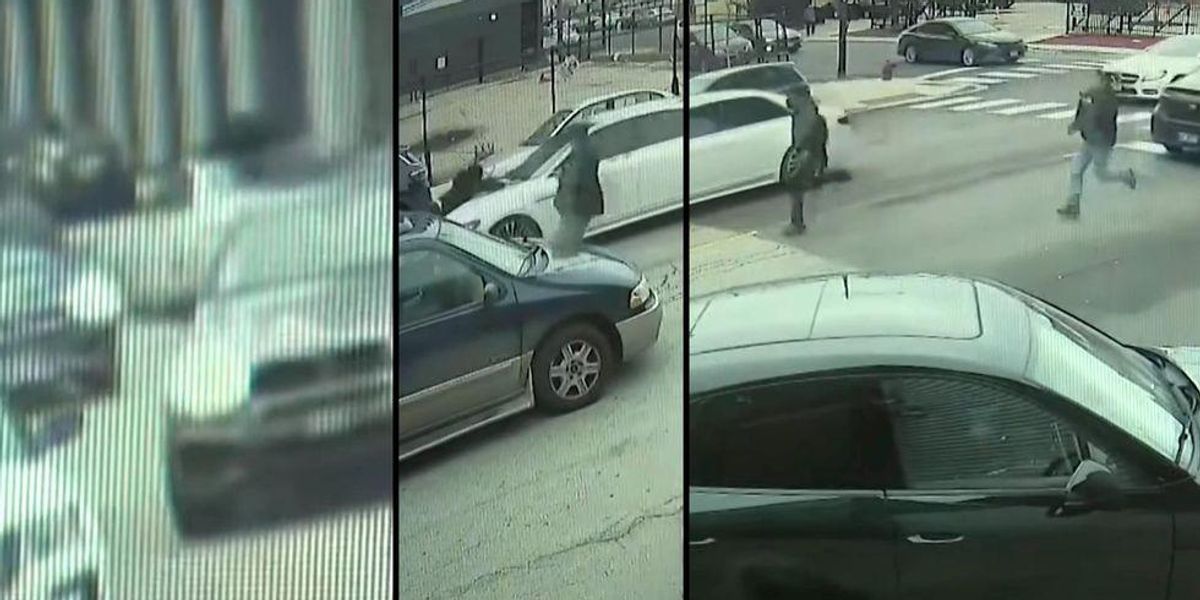 Astounding surveillance video captured the moment an alleged car thief sped away from police after hopping on the hood of a getaway car driven by an accomplice.

Chicago police told WBBM-TV that they came across a group of car thieves in the act of stealing a white Jeep on Tuesday at about 2:20 p.m. on the Near North Side of the city.

When police pulled up to the scene in an unmarked sport-utility vehicle, some of the thieves ran off while others drove off in a dark Infiniti vehicle.

The video from a nearby business shows police trying to chase down one of the culprits, but he was able to jump onto the hood of a white Lincoln sedan that turned out to be driven by an accomplice.

A Chicago police sergeant can be seen attempting to grab the man, but he was hit by the car as it drove away.

Police said the man slid onto the roof of the car and told the getaway driver to step on the gas.

That officer was not injured in the incident.

Police later found the Infiniti crashed into a light pole after it had run into a Ford van that belonged to the Furry Paws Chicago dog day care center. Neither the driver of that van nor the three dogs inside were injured in the crash.

They discovered that the Infiniti had also been stolen.

All of the thieves escaped the scene, and no one was hurt in the incident.

Chicago saw more car thefts counted in a month in October than in over 20 years. There were more than 3,000 car thefts just in that month compared to a 6-month average of 689 cars stolen for the month of March in 2020.

Here’s the video of the car hood getaway:

[embedded content]Search on for suspects after Near North Side auto thefts, pursuitwww.youtube.com