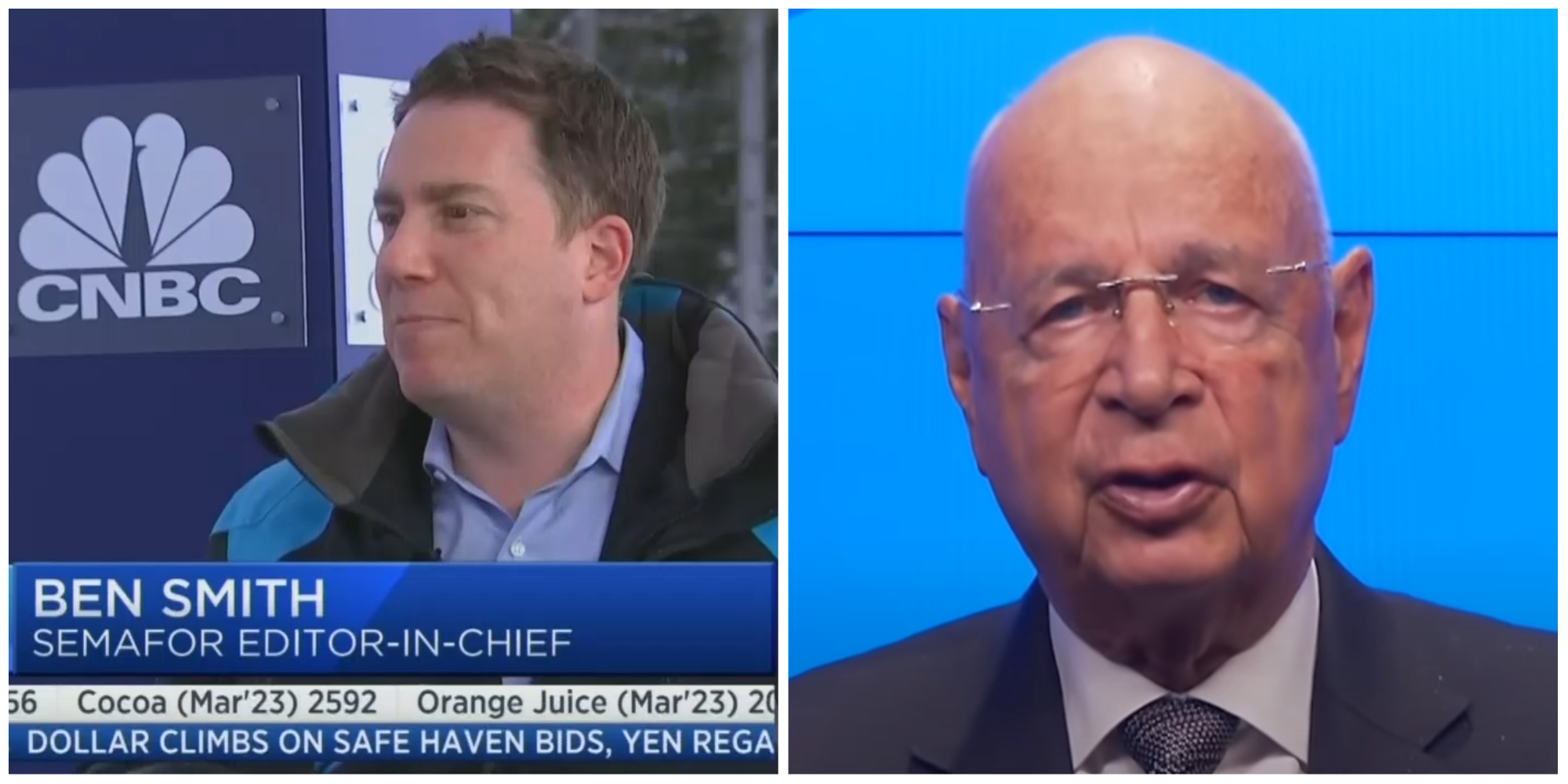 The same media figure who led the leftist news outfit that peddled and pushed the Steele Dossier cast shade on Twitter owner Elon Musk’s warnings about the dystopian elitism that undergirds the World Economic Forum (WEF). 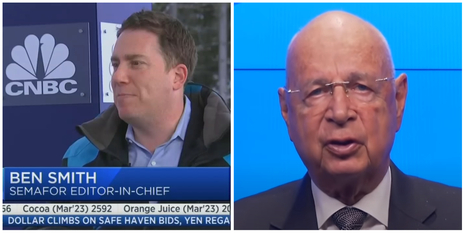 Semafor Editor-In-Chief and gaslighting savant Ben Smith pooh-poohed Musk “whipping” “up” right-wing ire on Twitter about the WEF, an organization that promoted an Orwellian proposal to microchip children. He mocked conservatives with well founded concerns, smugly calling them “people who think that the CEOs here are gathering to make you take vaccines and to eat bugs,” on the Jan. 19 edition of CNBC’s Squawk Box. Musk responded in a Jan. 18 tweet to a video of WEF Executive Chairman Klaus Schwab  saying that a “Global Collaboration Village” was safe because the International Criminal Police Organization (or Interpol) was on board. “WEF is increasingly becoming an unelected world government that the people never asked for and don’t want,” Musk said.

But just over three hours after Musk tweeted his critique, Semafor, apparently oblivious, tweeted a video of Smith mocking the so-called “conspiracy theories” surrounding the WEF meeting in Davos, Switzerland. “[T]here may be a conspiracy, it’s basically a conspiracy by global businesses to keep their taxes low by making the case that they’re doing good in other means than paying taxes to the government,” Smith gaslighted. “There are no lizards involved.”

Just “global businesses” trying “to keep their taxes low” eh Smith? Is that how he characterizes former Vice President Al Gore going on a triggered rant about “‘boiling the oceans,’” “‘rain bombs’” and “‘climate refugees’” during a WEF panel?

Also, what was CNN has-been Brian Stelter doing hosting a WEF panel complaining how people need to start trusting “established” information sources instead of so-called online “disinformation” spreaders? The panel’s proposed solution was to amplify those “trustworthy sources” while “pre-bunking” (i.e. censoring) content deemed to be “disinformation.” Smith’s former boss, New York Times publisher A.G. Sulzberger, was on that panel pontificating how social media platforms “have to do an unpopular and brave thing … to differentiate and elevate [pre-approved] trustworthy sources of information consistently.”

Smith dismissed concerns regarding WEF elitism on “vaccines” and “bugs”despite the fact that WEF’s Digital Editor of Strategic Intelligence John Letzing justified vaccine mandates as “measures [to] help keep people safe” in an August 2021 article which was updated Jan. 31, 2022. Also, the WEF published a video on its Facebook page in 2019 promoting the virtues of bug eating. “Would you give edible insects a try to help save the planet?” the WEF propagandized. It captioned the post: “Bug appetit.”The WEF clearly has an apparent affinity for vaccine mandates and bug-eating, and it is funded by the global business entities that partner with it. Despite this, CNBC co-anchor Andrew Ross Sorkin slobbered over how Smith was supposedly giving viewers the “caviar in the news.”

Smith would know a thing or two about “conspiracy theories.”

This is the same Ben Smith who was once the editor-in chief of BuzzFeed News. Yes, that’s the same site that still continues to host the discredited Steele Dossier it published that sent the nation into a multiyear political and legal tailspin over the Trump-Russia collusion hoax. He even published an op-ed in 2018 for The New York Times, where he would later be hired as a media columnist, headlined: “I’m Proud We Published the Trump-Russia Dossier.” Talk about arrogance. However, it shouldn’t be a surprise then that Smith would play the WEF flunky now and make it seem like concerns over the crazy proposals and ideas that have been pushed by that cesspool of an organization are nothing but conspiracy theories. [Emphasis added.]

Conservatives are under attack. Contact CNBC at cnbcnewspr@nbcuni.com and demand it stop gaslighting about WEF elitism.

Millionaire Bernie Sanders Charging $95 A Ticket For Event Where He Tells You Why Capitalism Is Bad
Newsweek Op-Ed: “We in the Scientific Community Were Wrong. And it Cost Lives”
Suburban Chicago school employee accused of stealing $1.5 million in chicken wings
Teacher who was brutally attacked by 9th-grade girl hospitalized, said to be unable to walk; student charged with aggravated battery
Baby, kidnapped in December, dies weeks after he and his twin brother were rescued