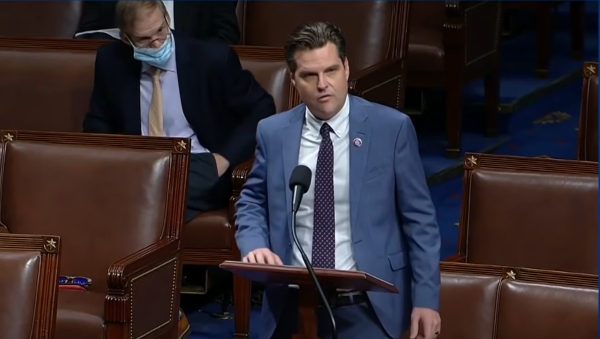 (Natural News)
Florida Republican Rep. Matt Gaetz is furious after the Bureau of Alcohol, Tobacco, Firearms, and Explosives, out of nowhere, has deemed pistol braces to be illegal after the agency gave them a pass for years before the far-left counterrevolutionaries installed the brain-dead Joe Biden in the White House.

Upon its enactment, the “Abolish The ATF Act” would immediately see the agency go away.

“The continued existence of the ATF is increasingly unwarranted based on their repeated actions to convert law-abiding citizens into felons. They must be stopped. My bill today would abolish the ATF once and for all,” Gaetz said on Wednesday after introducing the new bill, H.R.374, which is just one page long.

The ATF issued its final rule Friday that will treat guns with stabilizing accessories like short-barreled rifles, which require a federal license to own under the National Firearms Act.

Attorney General Merrick Garland said the ruling enhances public safety, but Gaetz said it unfairly punishes disabled gun owners and veterans who rely on stabilizing braces to be able to fire with one hand.

“I have a lot of disabled veterans in my district who enjoy pistol shooting and rely on stabilizing braces to be able to engage in the activity,” Gaetz said in a phone interview with Fox News earlier this week. “The recent actions from the ATF essentially allow them to make case-by-case determinations on whether a pistol with a stabilizing brace is legal or an unlawfull, sawed-off shotgun.”

According to the agency, the new rule does not affect stabilizing braces that are “objectively designed and intended as a ‘stabilizing brace’ for use by individuals with disabilities, and not for shouldering the weapon as a rifle. Such stabilizing braces are designed to conform to the arm and not as a buttstock. However, if the firearm with the ‘stabilizing brace’ is a short-barreled rifle, it needs to be registered within 120-days from the date of publication in the Federal Register.”

“I think they are under the flawed conception that a stabilizing brace increases the lethality or danger of a pistol,” he said. “It seems the ATF is on a snipe hunt for regulatory action that virtue signals to the anti-gun left, but that has no real practical safety impact on Americans.”

His bill has been referred to the House Judiciary Committee and does not yet have any co-sponsors. But he said that Republicans broadly support going “after the actions of ATF.”

“I believe that you are likely to see ATF bureaucrats hauled before the Judiciary Committee to explain themselves in the coming weeks and months,” said Gaetz, who also sits on the committee. “Because we’re hearing this very loudly from our constituents, and the reason I filed this bill is, frankly, I think that the ATF should have to justify their existence at all.”