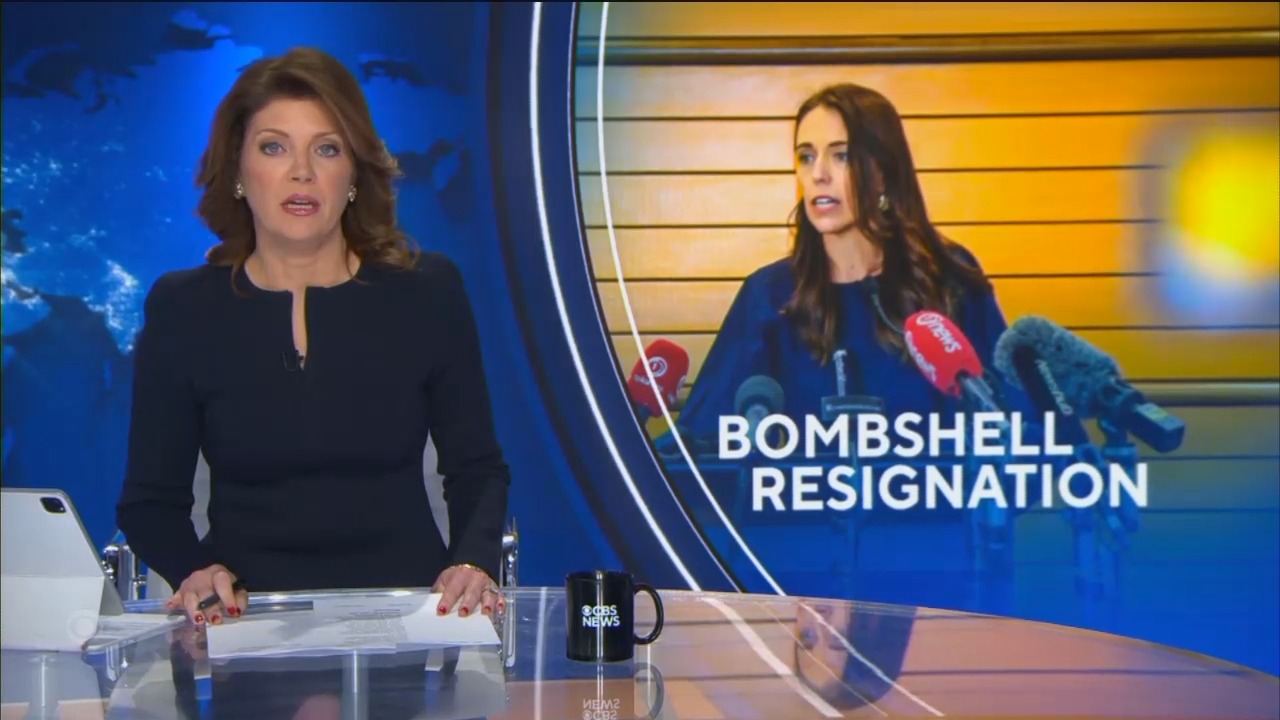 The “big three” broadcast networks of ABC, CBS, and NBC grew embarrassingly weak in the knees Thursday over far-left New Zealand Prime Minister Jacinda Ardern’s sudden resignation, swooning over her as an “empathetic” “inspiration” and “pioneer” who achieved “global stardom” as “one of the world’s most influential national leaders” who enacted mass gun confiscation with “no pushback.”

Of course, the networks refused to highlight Ardern’s authoritarian aversion to free speech she views as hateful, her background as the former head of the International Union of Socialist Youth, her mealy-mouthed views on communist China (and the threat that poses to the “Five Eyes”), and support for a global reset post-COVID-19 pandemic.

Instead, we had early valentines. ABC’s Good Morning America co-host Robin Roberts boasted Ardern “rose to global stardom for her leadership when the pandemic hit” (which wasn’t true as she had been an elitist and leftist hero for years).

Correspondent Rhiannon Ally fretted that Ardern’s decision “sen[t] shock waves through her country of five million people and also the world, who got to know her through her empathetic leadership.”

She added that “Arden gained global recognition in 2017, becoming New Zealand’s third female leader at the age of 37 and one of the youngest in the world” and “guided New Zealand as they mourned the 51 people killed in the Christchurch terror attack in 2019,” including passage of “gun control measures”.

Roberts reacted to Ally’s piece with more laments: “Oh, my goodness. It was so surprising to get that news overnight.”

Having twice interviewed her, NBC’s Today was crestfallen. Co-host Hoda Kotb announced in a tease that Ardern was a “trailblazing prime minister” dropping a “stunning resignation.” Following a full report from correspondent Kelly Cobiella, Kotb had a nauseating reaction: “[S]he had a special touch.”

Cobiella was also beside herself over this “surprising and emotional announcement” by someone who “was the world’s youngest head of government at age of 37 when she was elected in 2017” and, after giving birth to her daughter, brought “her..to the United Nations General Assembly, determined to prove a new mom can lead a country.”

Cobiella poured it on with nods to her gun control measures and an eye-rolling softball interview Ardern gave to Kotb and co-host Savannah Guthrie in 2018 (click “expand”):

COBIELLA: Ardern won praise for her compassion and quick action, hugging families and banning assault weapons after a white supremacist gunman killed 51 people at two mosques. Locking down the country at the start of the COVID pandemic, telling Savannah and Hoda about her way of leading.

HOTB [on NBC’s Today, 09/25/18]: You talk about — I thought it was interesting — kindness in government. Usually you don’t see those two things together. When I hear you talk about your family, I sort of get it, but explain that.

COBIELLA: As late as December, still hitting back on questions of age and gender during a summit with the Finnish prime minister.

COBIELLA: As for a legacy —

ARDERN: I hope in return I leave behind a belief that you can be kind but strong. Empathetic but decisive, that you can be your own kind of leader, one that knows when it’s time to go.

Cobiella did end with the reality that her poll numbers were in “a really rapid decline” stemming from “concerns over the economy, concerns over crime, the cost of living.”

Not to be left out, CBS Mornings had an extended news brief. Co-host Tony Dokoupil revealed to viewers that “one of the world’s most influential national leaders will step down”, adding “she was widely praised for her leadership during the pandemic and her response to a mass killing at a pair of mosques”.

Co-host and Democratic donor Gayle King swooned: “I remember when she was first elected, people were so excited. She was so embraced. And generally speaking, people thought she did an amazing job. She accomplished a lot and was well-liked. Sorry to see her coming down.”

Dokoupil reminded her that “after that shooting at the mosque, New Zealand successfully banned all assault style rifles in the country.” After both replied it happened “immediately,” King boasted that “[s]he got no pushback on that.”

CBS and NBC kept up the hero worship on their evening newscasts. On the CBS Evening News, anchor Norah O’Donnell hyped Ardern as “the young mother” who “helped ban assault weapons” and was “an inspiration all around the world.”

NBC Nightly News anchor Lester Holt had his own praises: “A stunning announcement from New Zealand’s prime minister celebrated around the world for her accomplishments but now suddenly leaving office because she says it’s tired her out.”

Longtime NBC correspondent and MSNBC host Andrea Mitchell extoled Ardern as “a pioneer” and trumpeted Ardern’s far-left agenda before ending with a question to friend and longtime Swamp denizen Wendy Sherman of the State Department on whether Ardern leaving will set women back (click “expand”):

MITCHELL: Praised for ban aggravated assault weapons when a person targeted two mosques and speaking out against anti-Muslim hate.

ARDERN [in 2019]: They chose to make New Zealand their home. And it is their home. They are us.

MITCHELL: And shutting down early when COVID hit, getting cases down to zero though the aggressive lockdown later sparked a backlash. Through it all, pushing back against gender stereotypes.

MITCHELL [TO SHERMAN]: You see this as a setback for this new generation of younger women leaders?

SHERMAN: I actually see it as an affirmation of the new generation of younger leaders. She knows she’s going to have many chapters in her life.

MITCHELL: She hopes her legacy will be that you can be kind but strong. And know when it’s time to go.

Thursday’s pathetic fawning over a leftists leader was brought to you by advertisers such as Ashley Homestore (on CBS), Chewy (on NBC), Progressive (on CBS), and Target (on ABC). Follow the links to see their contact information at the MRC’s Conservatives Fight Back page.