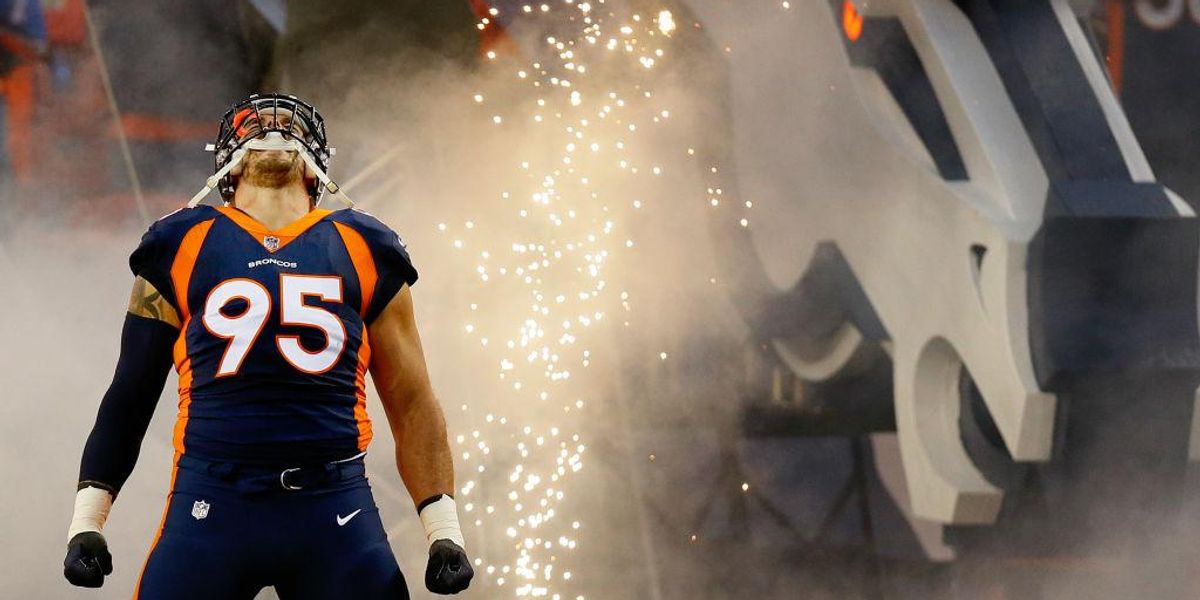 A former NFL player slayed a massive mountain lion weighing nearly 200 pounds after the animal was “wreaking havoc” in his neighborhood.

Derek Wolfe, a former NFL player who played for the Baltimore Ravens and won the Super Bowl with the Denver Broncos, shared an incredible photo of the mountain lion he took down with a bow and arrow.

Wolfe said he received a call from a friend who is a hunter regarding a “giant” male mountain lion that had been “wreaking havoc in a rural neighborhood” in Colorado.

The former NFL player said, “He had already killed two of her dogs and was living under her porch, nervous what he might do next.”

Wolfe and his hunter friend started tracking the mountain lion, and quickly discovered a mule deer that had been killed.

Wolfe hiked 9,600 feet up a mountain in the Colorado Rockies, and suddenly the big cat was in front of him. Despite being exhausted, dehydrated, and cramping from the grueling hike, Wolfe was able to slay the mountain lion with a direct hit with a bow and arrow.

Wolfe shared a photo of the enormous mountain lion on his Instagram. The former defensive tackle, who is 6 feet 5 inches tall, is seen hoisting the mountain lion that stretches nearly as far as Wolfe’s body. The mountain lion is estimated to be about 195 pounds.

Reactions online varied, and some attacked Wolfe for killing the mountain lion. However, Wolfe’s kill was completely legal under Colorado state law.

A spokesperson for Colorado Parks and Wildlife informed TMZ Sports that Wolfe did everything by the book and his hunting license and is “in good standing.”

Wolfe, who is an avid hunter, described the takedown of a male mountain lion (known as a Tom) during an episode of “The Drive” sports-talk radio show that he co-hosts.

Van Jones Claims Black Police Officers Are Still Motivated By Racism
Trump’s Plan to End ‘Left-wing Gender Insanity’ Is One We Can All Get Behind
Bill Maher pushes back when Bryan Cranston declares critical race theory ‘essential’ to be taught in schools
IBM announces 3,900 layoffs as Big Tech financial struggles continue
Report: Nikki Haley to Announce for President February 15