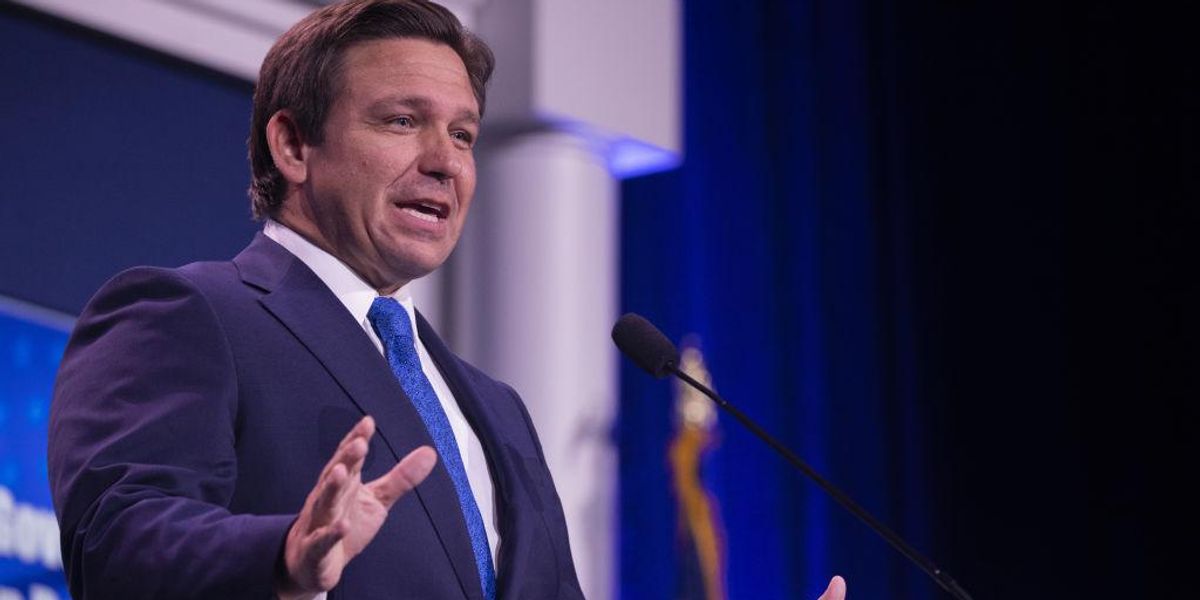 When was the last time you saw Republicans leading Democrats in any opinion poll on education? Likely never in this generation, not unlike their dismal polling on health care. Education and health care are probably the two most impactful issues on human life, liberty, culture, and economy, yet Republicans have ceded them to the left forever. They tepidly play their “me too” game of acceding to the same socialist policies, merely with less enthusiasm and slightly less funding, rather than offering a new vision altogether. This is where Ron DeSantis has upended the paradigm. He has already offered transformative change on many of the medical freedom issues; now he is doing the same on education.

As he declared Florida the “Education State” at his Monday press conference, DeSantis did something that no other Republican would have had the guts to do: he blocked the implementation of a college AP course on African-American studies.

Just as a farmer erects a scarecrow to protect his produce, the cultural Marxists erect political human shields around their most divisive and destructive agenda items that are usually messaged as “black studies,” “women’s health,” “curing diseases,” or “protecting poor people and puppies.” That immediately scares off all Republican resistance, no matter how pernicious the underlying policy and agenda are.

Undaunted by the scarecrow, DeSantis categorically rejected the program and had no problem articulating how this harms our culture and children and is actually offensive and insulting to Americans who happen to be black. “If you read what’s actually in there, they’re advocating things like abolishing prisons,” said the Florida governor in a press conference.

“Now that’s a radical political position. … It’s also not fair to say that somehow abolishing prisons is somehow linked to black experience. … They want law and order like everyone else wants law and order,” declared DeSantis. “So that is more ideology being used under the guise of history.”

The Florida Department of Education rejected the College Board’s AP African-American studies course because the syllabus contains various critical race theory principles comparing slavery of the past to different political grievances the left has today. Feminism, “queer” theory, and anarchist movements like BLM also wind their way into the syllabus.

u201cDespite the lies from the Biden White House, Florida rejected an AP course filled with Critical Race Theory and other obvious violations of Florida law. We proudly require the teaching of African American history. We do not accept woke indoctrination masquerading as education.u201d

DeSantis was undeterred by the race card played against him and turned it right around on detractors in explaining his support for studying impactful black American figures in history, which is a part of Florida’s mandated curriculum. “I view it as American history, not as separate history.”

The point is he refuses to acquiesce to the premise of the left on a single issue, which frees him up to speak directly to the logic and common sense of the actual policy. He did the same when a reporter asked whether his opposition to teaching gender ideology in schools is born out of anti-gay animus.

u201cREPORTER: “People feel [that] you want to appeal to a crowd who are really, really anti-gay.”nnDESANTIS: “It has nothing to do with that […] Having any sexual content in elementary school is inappropriate […] ‘Well what gender would you like to be?’ No!”u201d

Notice he never got defensive, nor did he pander. He spoke directly to the policy in a way most parents, except for the blue-haired hippies, would appreciate.

The press conference itself was about his announcement of a “teacher’s bill of rights” in an effort to weaken union monopolies and coercion against teachers, parents, and students.

u201cToday, I unveiled my plan to empower Florida educators by:n- Securing a $1 billion increase in teacher payn- Implementing a Teachers’ Bill of Rightsn- Enacting paycheck protection and other reforms to school unionsn- Term limiting school board members to 8 yearsu201d

In the past, Republicans have shied away from leaning in this hard against the state’s public-sector unions out of fear of appearing to be anti-education. Instead, DeSantis announced a set of reforms prohibiting automatic union dues, limiting union boss pay, upending the relationship between the unions and the school boards, and barring all unions in school districts unless they garner 60% support, among other reforms.

And as always, he is willing to use the boot of the government for freedom the way the left uses it for tyranny. “We will be establishing a new process for individuals to notify the state if a teacher’s rights have been violated, and we will ensure that our Florida Department of Education can investigate those complaints very quickly,” DeSantis announced. He was referring to the issue of teachers getting punished for trying to infuse basic discipline and control into the classroom. So not only does DeSantis lean in on the cultural issues, he also makes cultural issues out of simple, traditionally non-political ideas that transcend political lines.

DeSantis, with his strong electoral margins in places like Tampa, Jacksonville, and Palm Beach County, clearly has resonated with many suburban (and even urban) voters who have recently fled the Republican Party. He has largely accomplished this on the education issue by standing up for parental rights, bodily autonomy of students not to be masked, and extirpating grooming and sex studies from the classroom.

Thus, when he announces a massive pay raise for teachers, something indeed other Republican governors often do, he is ensuring that, unlike in other red states, it is actually going to the teachers and not to lining the pockets of those who campaign against our values in the classroom.

Too many red-state governors have been content to cede education to the left. Their own departments of education are indistinguishable from the education officials in California. This is how states like Idaho have sexualized curriculum being taught in their public schools. Indiana Governor Eric Holcomb has been so favorable to union demands that for the first time in recent memory, the Indiana State Teachers Association declined to endorse the Democrat candidate against him during his last election in 2020.

These diffident Republicans feel as if our views are somehow foreign and should be confined to our homes and that somehow the left gets to own public education as its perpetual home-field advantage. But if we believe in the truth of our values, shouldn’t our values be the ones that prevail in our states? Shouldn’t we have the home-field advantage in red states?

The question for other GOP governors is how much of civilization are they willing to cede because they are too scared to stand their ground against the barking dogs of cynical identity politics.

There Oughta be a Law: ND House Votes to Criminalize Drag Shows for Kids
MSNBC: No Legitimate Reason to Keep Eric Swalwell Off Intel Committee
MSNBC Uncorks Fever Dreams of MAGA Killing Democracy — As DirecTV Nixes Newsmax
A&W Restaurants parodies announcement from M&M’s, jokes about putting jeans on cartoon bear because ‘even a mascot’s lack of pants can be polarizing’
On PBS, Amanpour Warns LGBTQ ‘Human Rights Are Under Fire’ from ‘Strange’ DeSantis