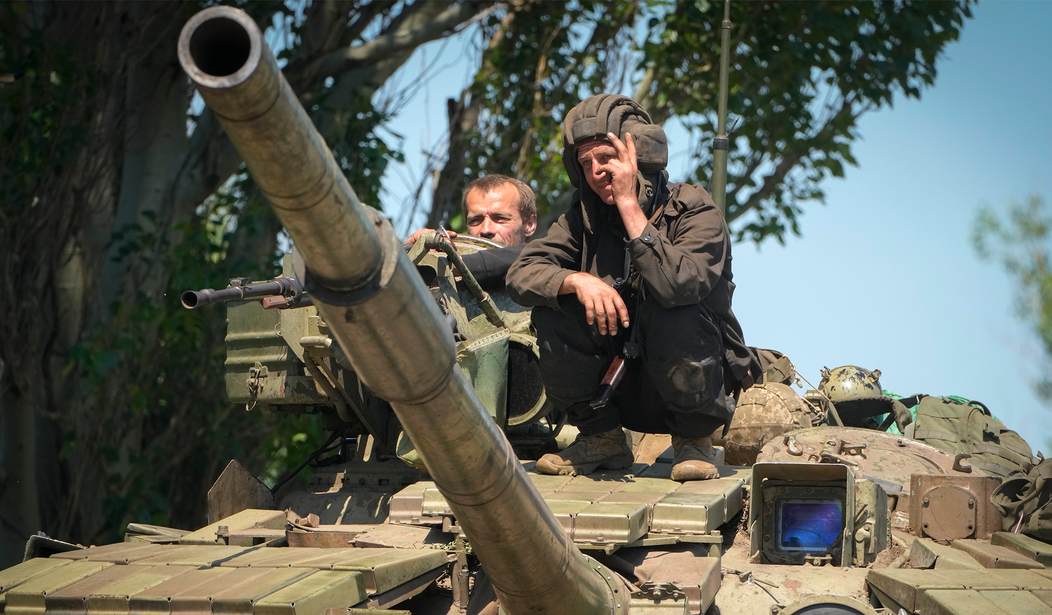 Last Friday, a bipartisan delegation of U.S. senators visited Ukraine, and at a press conference, Sen. Lindsey Graham (R-S.C.) vented his frustration over resistance to giving Ukraine anything it needed to beat back Russian military forces.

“I am tired of the s**t show surrounding who is going to send tanks and when they’re gonna send them,” Graham said during a press conference in Kyiv. “World order is at stake. Putin is trying to rewrite the map of Europe by force of arms.”

Now here we are, nearly a full year after Russia’s invasion, and despite massive losses, Vladimir Putin continues to grind forward. Some estimates place Russian losses at more than 100,000 dead and wounded. But it’s Putin’s total disregard for international law and the laws of war that makes this conflict so dangerous.

A Russian victory would be unthinkable — as unthinkable as a victory for Hitler would have been. Scholar Andrew Michta has called it a “system-transforming” war as the old European order — stable, relatively peaceful — gives way to aggression and blood. Compare the way things are now with the heady days following the fall of the Berlin Wall. All that hope and happiness has dissolved into fear and dread for the future as Putin pushes the U.S. and NATO to the brink.

Dictators around the world are watching what happens in Ukraine very closely. If Russia were to prevail, is anyone prepared to say that power-hungry despots elsewhere in the world wouldn’t try to duplicate Putin’s feat of arms?

Putin has made clear that he will soak the ground of East-Central Europe with blood—both of Ukrainians and of his own hapless mobiks, the recently mobilized draftees he’s sending into the military meat grinder—if that’s what it takes to subjugate Kyiv and end the Kremlin’s unexpected and ongoing humiliation. At this point, the fight in Ukraine is not about borders or flags but about what kind of world we’ve built over the past century, and whether that world can sustain itself in the face of limitless brutality. As the Finnish Prime Minister Sanna Marin said in Davos last week: “We don’t know when the war ends, but Ukraine has to win. I don’t see another choice.”

There are some observers and commentators who believe that it’s worth the risk of nuclear war or a global conflict for the West to prevail in Ukraine at any cost. That may be true, but it makes sense to try not to provoke a nuclear conflict because of our own miscalculation and error. Would sending advanced battle tanks to Ukraine be such a provocation?

At present, Ukraine will be facing a major Russian offensive very soon and desperately needs tanks to repel the push. Everyone knows it. Everyone agrees that Ukraine risks losing the war without the tanks.

But the coalition of nations supplying Ukraine with weapons is at loggerheads over which nations should supply the tanks and how many should be sent. The Western tanks are supposed to be superior to the Russian T-90 or T-14 battle tanks. and the German-built Leopard 2 tank — much desired by the Ukrainian military — would give Kyiv a distinct advantage on the battlefield.

German Chancellor Olaf Scholz is refusing to send any Leopards to Ukraine or authorize export licenses so that other nations can send them. His reason is that he doesn’t want to poke the Russian bear. He wants America to send at least a token number of Abrams battle tanks first so that if the Russians get mad, they’ll be angry at the U.S. first.

Scholz believes — quite rightly — that sending top-of-the-line battle tanks to Ukraine is a dangerous escalation. But his hesitation is being questioned by members of his own coalition.

The Greens’ co-leader, Omid Nouripour, said Monday it is “necessary” to finally have clarity on the topic “as quickly as possible.”

And the liberal Free Democrats’ Marie-Agnes Strack-Zimmermann called Scholz’s reluctance a “catastrophe” and said his government had “failed.”

Strack-Zimmermann also got into a public argument with the Social Democrats’ parliamentary group leader, Rolf Mützenich, who accused her of “talking us into a military conflict.” The FDP politician responded on Twitter, calling Mützenich “the symbol of all the central failures of German foreign policy.”

This in turn prompted a sharp response from the Social Democrats’ co-leader, Lars Klingbeil, who on Monday urged the leadership of Greens and FDP to rally their politicians behind the government coalition and stop the continued attacks against the chancellor and his party.

Poland is getting antsy and wants the Germans to make up their minds on the issue. The Poles are prepared to send tanks tomorrow if given the go-ahead from Berlin. The German foreign office said on Sunday that the German government would not “stand in the way” of the Poles supplying Leopards to Kyiv.

But a few hours later, the chancellor’s office backtracked and said not so fast.

But Scholz’s spokesperson Steffen Hebestreit suggested Monday that Baerbock’s statement did not represent a decision agreed upon within the government, highlighting the growing disunity within the coalition over the issue. Hebestreit said any request for sending Leopards would first have to be discussed and decided upon according to the “established procedures” within Germany’s federal security council — a reduced Cabinet formation involving Scholz, Baerbock and a few other ministers.

The issue threatens Scholz’s socialist coalition. And the U.S. is doing its part to muddy the waters by placing pressure on Germany to grant the export licenses without the United States sending any of its own advanced Abrams tanks as Scholz wants.

The Abrams tanks are hard to maintain and run on jet fuel. It would take months to train Ukrainian maintenance personnel so that the tanks can be made combat-ready. The U.S. certainly isn’t going to send its own people to Ukraine, making Scholz’s objections seem more an act of desperation than caution.

Ukraine says they need 300 Leopards — to start. War has a nasty habit of chewing up men and equipment, necessitating a constant flow of replacements. Kyiv will almost certainly get its tanks, but the rifts in the anti-Russian alliance have been exposed and could affect future decisions on weapons for Ukraine.

Trump Says DeSantis Running in 2024 Would Be ‘A Great Act of Disloyalty’
After Attack on Israeli Synagogue, United Nations Displays Intense Hypocrisy
Pfizer issues response to Project Veritas sting video, but critics characterize its statement as ambiguous
Whoopi Goldberg Desperately Tries To Spin Classified Docs Scandal For Biden (VIDEO)
Rhode Island assistant principal asks for donations to help student pay off ‘coyote’ who smuggled him into the US